T21 hours of flying is fairly exhausting. My journey began in Ann Arbor, Michigan, on the afternoon of the 19th of June. Two days, a few hemispheres, four continents, and five countries later, I finally arrived in Nature’s Valley just as the sun dropped behind the Tsitsikamma mountains. Exhausted and somewhat confused, I stumbled into the intern house. I was greeted warmly, before enjoying several cutthroat rounds of Uno. The string of losses which followed were likely the result of the solid one-maybe two hours of actual sleep I’d cobbled together over the last couple of days. 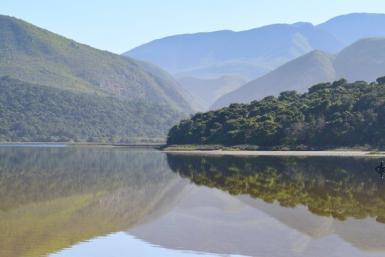 While the news of a pre-7am wake up the following morning was not exactly what I was looking for, in the end I was glad I did it. We helped Daniel with his study of habitat fragmentation in the fynbos- counting birds and sampling flowers (Erica discolor and Proteas). My first sights of Nature’s Valley came as we hiked up to the Otter Trail. The valley stretches out in front, and you can see all the way down the coast to Robberg and Plett. The view alone was worth the early climb, but Daniel’s work was also fascinating, especially for a birder like me. Bushwhacking to survey sites left my legs cut up, but endemic species were everywhere. Orange-breasted Sunbirds and Cape Sugarbirds were calling left and right, while Cape Gannets flew between the waves below. Thanks to Daniel’s expertise, we were also able to hear several Victorin’s Warbler and the recently range expanded Lazy Cisticola. I also had my first taste of fieldwork here, and learned about the unique and diverse fynbos, a habitat unique to the Cape region. 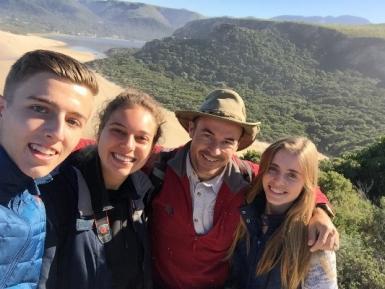 The next few days were spent on other studies around the valley. Brittany’s mosquitofish study was particularly memorable. Mosquitofish are an invasive species which was discovered to have made its way into the Groot River system. The study involves visiting a number of sites along the river, recording water parameters, and finally swiping a fishing net along for five samples of five meters each. Madeleine and Megan were first to try their hand at fishing, and were successful in both catching mosquitofish and getting covered in mud. We then measured and sexed the fish, a task which took some time, as we caught hundreds of fish. Later in the week, I had the opportunity to try my hand at fishing, surveying the remaining sites. Much to the laughter of Brittany, Megan, and Madeleine, I quickly became soaked, my boots filled with mud. More banter ensued as I failed to catch a single fish, while almost falling in several times. Despite the mud and teasing, I enjoyed the experience. Kayaking with everyone was a lot of fun, and the views of the river and mountains were amazing.

When I wasn’t helping with studies, I spent much of the time hiking. Nature’s Valley and Plett are great hiking destinations. From the house, I could walk to the beach, the Salt River,  Pig’s Head, Nature’s Valley lookout, Kalanderkloof, and the forest walk, among others. The Salt River mouth is a beautiful and peaceful spot which can be reached either by the coast, or over the lookout trail. Pig’s Head gives a spectacular 360 view of the valley, and is only a short walk from the beach. While I didn’t walk to the top of Kalanderkloof until my final week in the valley, it was one of my favourite walks. The trail takes you up a stream bed, past some massive Yellowwood trees, before taking a steep turn up into the fynbos. The forest here is full of wildlife, with many monkeys, Knysna Turacos, and bushbuck. The view from the top is among the best in the valley. The R102 winds through the forest below and the horizon is filled by the by the Indian Ocean. Behind you are the Tsitsikamma Mountains, with Formosa Peak towering in the distance. Not bad at all. 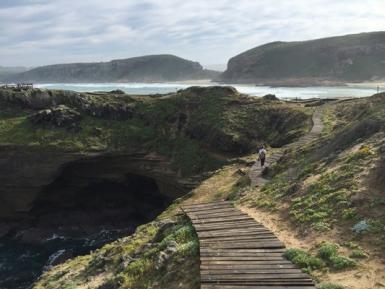 My first weekend, Megan, Madeleine, and I drove down to Robberg Nature Reserve, a picturesque spit of land jutting out into the Indian Ocean. We had a lovely walk, seeing (and hearing- they make some weird sheep -like noises) the many Cape Fur Seals at the colony, as well as a couple of Humpback Whales. The scenery is just amazing, with cliffs, fynbos, sand dunes, and the sea. Afterwards, we explored Plettenberg Bay a little, visiting a nice coffeeshop and a bookstore. At the shops on the way home, Megan and Madeleine convinced me to try an array of South African foods- biltong, rusks, and koeksisters- all of which I liked.

Another exciting outing was my first game drive, at Plettenberg Bay Game Reserve. While tiny in comparison to places such as Addo and Kruger, it offered a first taste of South Africa’s game reserves. While the cheetahs and lions here are fed and kept away from the rest of the animals, the other animals- various bok, Rhinos, Giraffes, Hippos, Leopards, and others- all sustain themselves and roam freely on over 2000 hectares. Despite the icy temperatures and sporadic drizzle, I really enjoyed the experience. It certainly made me want to come back to see one of the bigger reserves.

Now I’m back at the airport, heading home. Everything about my experience has been great, and it has been one of the best experiences of my life. I enjoyed the opportunity to work with Brittany, Kellyn, Mark, Gwen, and Daniel on their projects, and everyone at Nature’s Valley trust. Everyone can now admire my painting skills on their office wall for years to come. Hopefully I’ll get the chance to come back!

To find out more about volunteering at this programme, please click here.