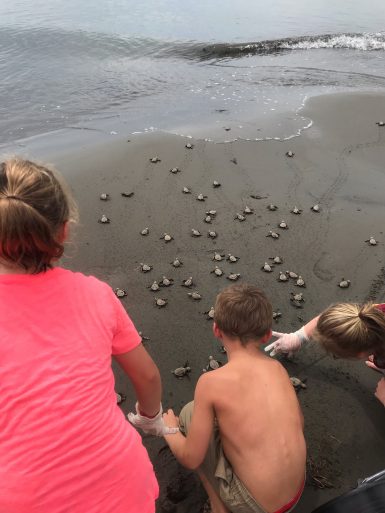 Our family broke tradition this year and experienced a Tropical Christmas, travelling around Costa Rica for 4 weeks.  I felt a burning need to escape the over-consumerism of Christmas for just one year.  It would be the first time ever without a big family Christmas, kicked off with the children opening mountains of ‘unrequired’ presents from well-meaning family and friends.

It was shamefully apparent last year that the kids grew almost bored with opening presents.  I knew something had to change.  Priorities were all wrong and I entered January 2019 feeling deflated, stressed and reliant on Gaviscon from the season’s over-indulgence.  We needed to take Christmas ‘elsewhere’.

Costa Rica had caught my eye in a few articles recently, predominantly because of its reputable biodiversity.  It was an appealing thought to introduce the children to wildlife as it should be; in its natural environment.   I was both impressed and intrigued by Costa Rica’s proactive stance on Climate Change and my research had satisfied me that it was a country considered safe for families, with low crime, a good health system, lots to see and do and not a waterpark or theme park in sight. Just what I was looking for.  Andy and I had travelled enough in the past to know that it could have its ups and downs but, throw 3 children into the mix (aged 10, 7 and 6) and anything could happen! This would be our first long-haul trip as a family.

The destination was set but I also wanted the trip to have a ‘purpose’.  This is when my frantic googling led me to a lady called Vicky at WorkingAbroad.com, and consequently, the Playa Tortuga Conservation Project. This project is a turtle sanctuary, which welcomes children as young as ours to participate in their volunteering scheme.  We had never done anything like it before, but I read the reviews, followed my heart and booked it.

The next step was sorting flights (this probably should have preceded booking the turtle sanctuary, but I had been over-excited at the thought of baby turtles!).  British Airways fly direct from the UK to San Jose. My husband turned slightly ashen at the cost, which was a little inflated compared to our usual 2-hour Ryanair to France, and dates were determined by flight prices.  It meant the children missing a couple of days of school on either side of the holidays but nothing too disastrous.

Our stay at Playa Tortuga was for 7 nights so we had plenty of time to see the rest of Costa Rica before and after. We wanted to be as self-sufficient as possible so I looked into hiring a car, but, as Christmas is peak season, the prices were just unmanageable.  Public transport only links the larger towns, leaving it difficult to get to more remote places. In the end, we settled on a private shuttle company and pieced our trip together, settling on six different areas.

A couple of weeks before we left, the children all received a letter from Santa, reminding them that Christmas was about family-time and experiences rather than copious amounts of presents, but also reassuring them that he would find them in Costa Rica. We celebrated an ‘early Christmas Day’ with grandparents, where the children opened a few gifts, consisting of backpacks, head torches, waterproof shoes, a voucher for a surf lesson, a disposable camera each and a Gratitude Journal that they could write in each day to record what they had learnt and enjoyed. Not your average Christmas presents but all well-received nevertheless. 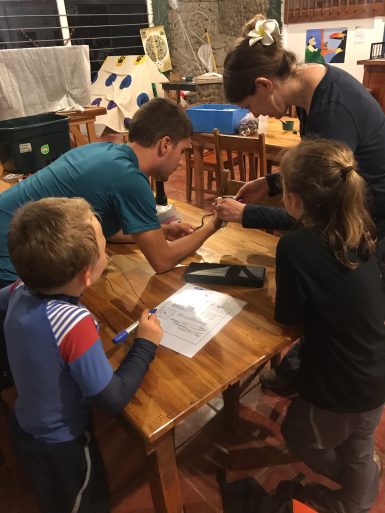 Then off we set. I had very high expectations of this adventure but, quite honestly, it exceeded them all. It was like landing on another planet.  The sights, sounds and smells were indescribably wonderful. The beaches (particularly at Samara) were the most beautiful I have ever seen, and the people were friendly and welcoming. Not a day went by when we didn’t see a new species of wildlife.  We were treated to sloths (that’s a big tick on my bucket list), howler monkeys, capuchins, iguanas, hummingbirds, toucans, crocodiles, scarlet macaws and even a coati. The list really is endless.

Most of our accommodation was ‘middle-of-the-road’.  In most places, we were all in one big family room and in some we shared a communal kitchen. There certainly weren’t any 5* all-inclusives on the itinerary!

For Christmas, we had booked a hotel in Manuel Antonio which, by all accounts, was going to be the most touristy area of our stay. It was a little more commercial than our other destinations, but it didn’t feel overcrowded in any sense. On arriving at Manuel Antonio, with ‘starving’ children, after a long shuttle trip, we had lunch at a beach bar where there was a local game called ‘Corn-hole’ being played. The children watched and, when it became available, they started to play.  Shortly afterwards they were joined by a group of Costa Ricans who had been watching and cheering them on.  They split into teams, including our children and, almost 90 minutes of Corn-hole later, the ‘chicos’ controversially beat the ‘chicas’. It was a brilliant afternoon and just what I’d hoped for in terms of integrating with a different culture.

Christmas in a Tropical place, just the 5 of us, was perfect: Unrushed, relaxing and hot!  On Christmas Eve the children left a traditional biscuit for Santa and water on the balcony for the reindeer. When they went outside in the morning to see if the reindeer had drunk the water they were greeted by a capuchin monkey. It was certainly a novel start to the day.

We had travelled with only a backpack each and therefore there was no scope for a suitcase full of presents. They each had 3 presents from Santa: One was something they had asked for; one was something sentimental, and the other was a Christmas decoration that they could put up next year and be reminded of this whole experience. I was worried that they would be disappointed, but instead they were just relieved that Santa had found them in Costa Rica. The presents they had would have been buried amongst several others if we had been at home. Instead, they were treated with value and love and the novelty of them has still not worn off.

Christmas Day was spent on the beach with tuna sandwiches on the balcony for lunch, a lot of singing and dancing to Feliz Navidad, and a meal at sunset in one of the local restaurants.

The next significant stop was the Playa Tortuga project, and what an experience that was!  We thought we had ‘roughed it’ so far, but not like this: Beds with no sheets; no furniture; 99% humidity; and no air con. But guess what?  It turned out to be the very best part of the whole trip; an unforgettable experience. Amongst snake hunts, monkey hunts, butterfly-handling, jungle walks and meeting a red-eyed tree frog the absolute highlight was watching baby turtles hatch. We were tasked with weighing and measuring a selection of the hatchlings and then later releasing them safely into the Pacific Ocean away from preying birds. The emotion is etched on my brain but, more importantly, I hope it will remain with the children forever.

We spent New Year’s Eve at the reserve and were very kindly invited to the owner’s house with the rest of the interns and volunteers for a BBQ with their family. The evening was spent with people from all over the world and the children were all taught to Salsa!! It was a cultural end to 2019!

The next day was a tearful farewell to the reserve and our last few days were spent ‘chilling’ in Santa Teresa. If you can’t ‘chill out’ in Santa Teresa there’s no hope for you!!

Coming home was harder than I ever imagined. The ‘travel bug’ has been well and truly reignited!  The things the children have seen and done are invaluable and more impactive than anything they could ever learn in a classroom.

Will we do it again? Definitely.

Will we find anywhere as perfect as Costa Rica? I really don’t know – but I’ve already been back in touch with WorkingAbroad and there may just be some elephants we need to visit in Namibia…….

Check out some photos from the Lea Family’s trip to Costa Rica on their Instagram Page.