It’s hard to believe that it wasn’t just the Covid-19 pandemic that dominated the headlines in 2020, when in fact, the year began with another kind of natural disaster. The 2019-2020 wildfire season was one of the most devastating experienced in Australia. Fires raged from September 2019 to March 2020 at an unprecedented scale; over 46 million acres of land was burned, an area the size of Syria, approximately 3,500 homes were destroyed, and 34 people lost their lives. The fires were finally extinguished by 4th March 2020, a long 9 months after the first ones had broken out, and Australia’s journey to recovery will be just as lengthy.

The state of Australia’s forests 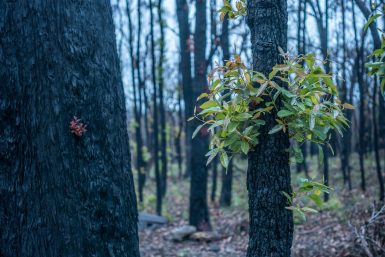 Despite the devastation caused by the bushfires, just 6 months on from the disaster, Australian forests showed encouraging signs of recovery. Trees that had been scorched by the fires are re-growing, with many producing epicormic buds, a cluster of leaves that lie beneath the bark and are protected from fire, stimulating the tree to re-sprout and regenerate branches and providing encouraging proof that the trees have survived. Australia’s eucalypt forest ecosystems are adapted in this way to withstand bushfires and are therefore responding well, however some forests may never recover entirely.

The Bushfire Recovery Project has been tracking forest regrowth weekly in areas of New South Wales and Victoria where bushfires were particularly devastating. Ecologists have compared pre- bushfire forest and the area burnt in the fires to assess their regrowth, finding that although the resilient eucalypts are recovering well, subalpine forests are struggling. Subalpine species regrow by dropping seeds, but as the bushfires during the 2019-2020 season were much more frequent and severe, the trees burnt were too young to produce seeds and therefore, the forest cannot regenerate. In Victoria, seeds were collected following the bushfires in an effort to re-establish forests in the worst scorched areas, but forest recovery will be slow-going and there is no way of knowing what the long-term impacts will be.

The impact on wildlife conservation

The bushfires also threatened Australia’s unique wildlife, with the WWF estimating that the total area burnt during the 2019-2020 season would have contained, and therefore impacted, almost 3 billion animals. Koalas were among the worst affected, with more than one third of the population perishing in the fires and the extensive loss of habitat is further hindering their recovery. It was estimated that 25,000 koalas were killed in bushfires on Kangaroo Island alone, half of the island’s population, pushing the species ever closer to extinction. Images from NASA showed that a third of the island was burnt, including large areas of the protected Flinders Chase National Park which housed some of the island’s most popular species. 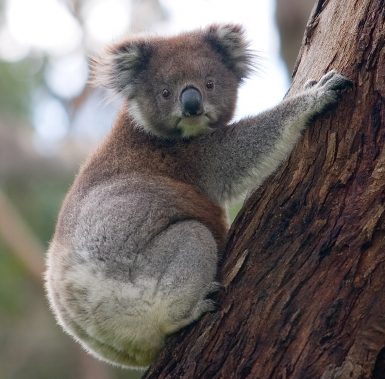 With people unable to travel from outside of Australia to support conservation projects due to the pandemic, rescue efforts on Kangaroo Island have relied upon local volunteers and international donations to rescue and rehabilitate wildlife. RSPCA South Australia’s Bushfire Appeal raised enough money to set up a project to save Kangaroo Island’s native species from starvation after their habitats were destroyed by the bushfires, by providing supplementary feeding stations. As the forests now begin to regenerate, there are positive signs that the surviving animals are now foraging for food by themselves and are no longer reliant on the intervention of locals.

The 2019-2020 bushfires highlighted the urgent need to improve Australia’s wildlife rescue capacity. WWF-Australia and Byron Bay Wildlife Hospital have recently funded and completed Australia’s largest mobile wildlife hospital, which will be an invaluable facility for future bushfire seasons, allowing the organisation to travel to any location to rescue and rehabilitate wildlife in crisis. It is hoped that the availability of immediate and high-level medical assistance will drastically reduce the number of fatalities in future disasters. The mobile hospital was funded through WWF’s ‘Regenerate Australia’ project, a 5-year plan to aid the recovery of the local communities, wildlife and ecosystems that have been affected by bushfires. A key part of this plan is the Koalas Forever project which has the goal to double the koala
population in eastern Australia by 2050, and it is hoped the mobile hospital will make a significant contribution to saving koalas from becoming further endangered.

Although Australia is no stranger to bushfires, 2019 was the hottest and driest year in Australia on record and the fire season was unprecedented in scale and duration, as the intense heat and drought dried out vegetation and became fuel for the fires. Such conditions are a direct result of climate change, which was estimated to have made the bushfires in Australia at least 30% more likely in an initial analysis of the disaster. Warmer than average temperatures due to climate change were also likely responsible for the record-breaking fire seasons seen not only in Australia, but also in the Amazon and California during 2020. As the intensity and frequency of wildfires will only continue to increase as the climate warms, unfortunately, this won’t be the last time Australia has to endure such a relentless wildfire season. 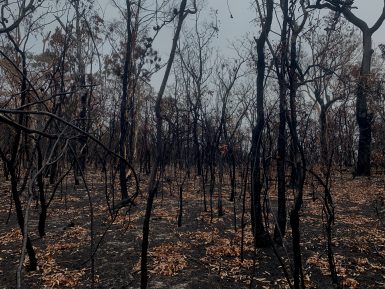 Since the beginning of February this year, a bushfire emergency has been ongoing in Perth in Western Australia as some of the largest fires seen in the city for many years have burnt through 9,000 hectares and destroyed over 70 homes. Climate action is needed to stop the world burning, but since Australia’s bushfire disaster in 2019, the government has failed to commit to stricter climate measures, despite protests taking place across the country.

There are fears that with bushfires becoming more common, forests and vegetation won’t have the time they need to recover between events. According to ecologists, this could be detrimental for species that are adapted to withstand irregular bushfires, and we may see forest ecosystems drastically change. A recent report detailed how 19 Australian ecosystems are being degraded due to human-induced pressures, including forests, and urgent climate action is required to prevent complete ecosystem collapse.

The recovery of Australia’s forests and wildlife following the bushfires is still ongoing and would be impossible without support. We’re hoping to be able to send volunteers back out to Australia soon, so why not check out the volunteer opportunities available with WorkingAbroad.