I returned once again to the ‘Bat Tree’ today. My latest goal is to capture images of the bats flying inside of the tree. So I grabbed the essential gear: camera, flash unit, headlamp and pillow, and entered the log at a slow crawl, carefully looking around using my red light. I didn’t have to go far at first, there were about a half dozen bats a few meters back from the entrance. I stopped and positioned myself to take photos however they flew further back as soon as I turned the light on. So I continued crawling until I was close to the center and there were at least 20 of them roosting there.

I stayed low to the ground and settled the camera onto the pillow. I aimed the light at them and, though most of them stayed roosting, a number of them flew back and forth from the back of the log and over my head to the entrance. They continued to be quite active while the light was on so I stayed in that position and watched them for a minute. They moved very quickly and, with the limited amount of light from my headlamp, it was difficult to focus on them as they flew in my direction.

I started off with some practice shots aimed straight through the log, where I kept the light aimed upwards to illuminate through the middle of the log and above where the bats were perched. That resulted in mostly blurred images of bats in flight but I had a better idea on where to focus. So what I finally did was focus on the bats perched closest to me, then turned the camera to take portrait shots. When the bats in flight appeared underneath the roosting bats I had focused on, I pressed the shutter. I was able to get a small number of shots where they were a lot more in focus, even though they still weren’t perfectly sharp.

I spent close to 2 hours there, turning the light off at times to avoid agitating them too much. Towards the end though they began to fly down low in the log, acting more disturbed; I turned the light off and decided to call it quits for the day. After looking through my images I ended up with a few interesting ones. I had to crop them a bit but they were a lot more in focus than my original shots. I plan to pay another visit in the near future!

On another day, I made a short visit to the bat tree to practice photographing the bats in flight again. I slowly crawled toward the nearest group of roosting bats, which was close to the center of the log. I stopped when I could see them several meters away and focused on a spot just in front of them.

I turned the light on, aimed it upwards and waited; a minute or so later a few bats from further back in the tree flew toward me. I took some photos as they passed the roosting bats, then they turned around to fly back. I managed to capture a few more decent images of them in flight. They were quite active at first, then they calmed down and most of them flew toward the back of the log and stayed there. When I exited the log I moved slowly and stayed low to the ground as a few had perched near the entrance.  They flew over my head and made their way into the darkness of the log as I climbed out into the daylight.

If you are interested in developing your photography and/or video skills, while contributing to conservation research in the Amazon, then check out the Photography Internship programme in Peru. 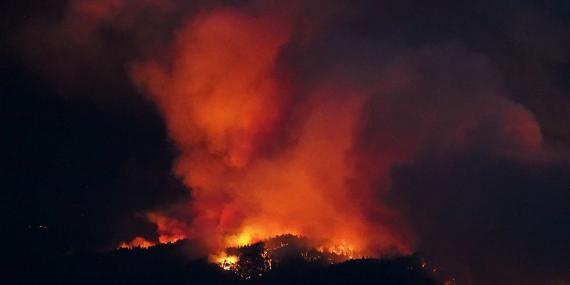 The wildfires in California continue to rage across the state, affecting the California Conservation project’s ability to do important conservation work.

Environmental Devastation in the ‘Jewel’ of the Indian Ocean

An environmental disaster is taking place at the Blue Lagoon Coral Reef project in Mauritius, as an oil tanker grounded near the coral reefs, and now threatening the incredible marine wildlife and future of the reefs.

The marine conservation and coastal restoration efforts on the Isle of Youth in Cuba continue to be affected from the lack of volunteers to assist on important activities on the island.