The Origins of Carnival

While Brazilian culture offers a variety of unique and interesting experiences, Carnival of Brazil is undoubtedly one of its most exciting attractions. Carnival is an incredibly popular holiday in Brazil and is celebrated as such, with a scale so large that 4-5 million people gather every February to be a part of it.

With origins dating back to 1723, Carnival was originally a food festival, the last chance for Catholics to eat well before fasting for Lent. It’s no coincidence then that the word “carne”  is included in the word “Carnival”, as Lent requires that believers forego meat and the word originates from the latin expression “carne vale” (farewell to meat).  Although the festival was imported from Europe with the arrival of Portuguese settlers, African Brazilians soon breathed life into the event with traditional dances, music and dress. Carnival has since become a much anticipated annual custom, with its largest event taking place in Rio de Janeiro and other, similar events across the country.

Carnival would not be the event it is today without the birth of Samba dancing and music. Beginning with informal groups called “blocos” marching the streets performing traditional songs, the need for more structure quickly prompted the creation of “Samba schools”.  Samba schools are deeply rooted in the community and are typically linked to certain neighbourhoods. Throughout the year, the schools practice a variety of activities, most important of which involve preparation for the annual Carnival festival. This involves developing a unique theme for the parade, building extravagant floats and costumes, and of course, rehearsing. Not only do these preparations unite Brazilian communities, but the creation of floats and costumes provides work to some of Brazil’s poorest citizens.

The most well-known event is the Samba Parade, where the hard work of Samba School students comes to light in an extravagant overnight showcase of costumes and dancing. However, the performance is not all fun and games. Throughout the parade, a panel of judges rates the groups on appearance, music, narrative, rhythm and floats, among other aspects of their performance. 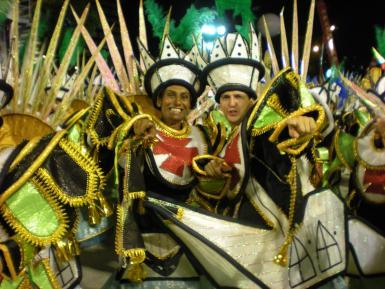 If you’re a night owl who enjoys a good celebration, Carnival street parties are where you want to be. Popular bands or “blocos” hit the sidewalks with a variety of music while Samba groups, drag queens and people from all walks of life join them to drink, dance and party. For those looking for a more formal experience, ticketed Carnival balls also take place with live music and amazing food.

The festival is not only open to locals, however. In fact, visitors are welcome to partake in the parade and all festivities as part of one of the Samba School groups. Costumes are necessary for this, so make sure you come prepared with your tassels, sparkles and sequins before hitting the parade line.

Despite the loving, fun spirit of Carnival, it is important that you take precautions before heading out on the town. This is a incredibly popular event, so large crowds and intoxicated patrons are to be expected. Do not bring anything of value unless absolutely necessary and keep an eye on your surroundings at all times. Most importantly, have fun while you enjoy this once in a lifetime experience and the incredible culture that comes with it.