“We admire elephants in part because they demonstrate what we consider the finest human traits: empathy, self-awareness, and social intelligence. But the way we treat them puts on display the very worst of human behavior.” ― Graydon Carter

Elephant populations across the African continent have been disappearing at an alarming rate in the past decades, in particular due to the increasingly lucrative business of ivory. The increasing amount of people on the planet is also putting pressure on wildlife habitats, leaving less space for wildlife like elephants to roam, and often resulting in human-wildlife conflicts. At the same time, tourists are riding elephants when travelling to in particular Asian countries, like Thailand, India and Sri Lanka. Not to mention the elephants that are suffering in circuses around the world for the sole purpose of entertaining people. It seems like no matter where we look, the elephant is suffering from the hands of humans.

To start off with the tourism industry. In the case of e.g. Thailand, the elephants were originally part of the logging industry, which became illegal in 1989. This left owners without any income, and the industry of tourist rides on elephants started. The demand for the rides became greater, and is now the reason why thousands of Asian elephants are currently part of the industry. Elephants are still continuously taken from the wild as young, and then beaten into submission. If you don’t know how elephants get submissive enough to actually carry people, I suggest you watch this video and get wiser (warning of harsh scenes). The process is called ‘the crush’ or phajaan, which has the sole purpose of beating the elephant’s spirit and will to fight.

This will happen to the young elephants whether caught in the wild or bred in captivity, as it never becomes part of the animal’s nature to carry people or being submissive. They carry you on their backs out of fear and not out of want. People are also under the impression that elephants are animals that can handle carrying people on their back for hours a day for decades. Just because they are large animals, it doesn’t mean their bodies are made for this type of work. Most elephants get spinal and back injuries from decades of carrying tourists on their backs. You can read more about the darker sides of the captive elephant industry here.

Thankfully awareness campaigns are working and people are waking up. The tourism industry has gradually realised that animal cruelty doesn’t belong in the business. Whether it being elephant rides, dolphin swims or tiger selfies; any of these practices are increasingly being rejected by tourists, due to the increasing awareness around animal welfare. I’d only wish that the same pressure was applied to the volunteering industry, which seems to have been forgotten, despite several companies collaborating with elephant camps in Asia and Africa. Even circuses are slowly retiring their wild animals, in particular elephants and big cats, due to increasing pressure from animal welfare groups. The least you can do is to never support a circus that tours entire countries and continents with wildlife, which is stressed out from lacking proper care and working under abuse for your entertainment. 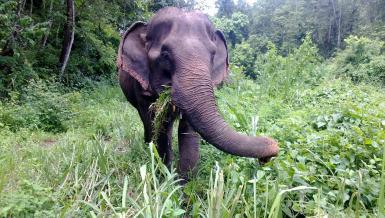 True elephant sanctuaries like our Elephant Sanctuary project in Thailand has the sole purpose of allowing elephants to live out the rest of their lives as an elephant. They help owners to retire their elephants from work in the industry. They don’t buy the elephants, because what will the owners do with this money? Will they just go and buy a new elephant that will be taken from the wild, and thus keeping the vicious circle going? The project provides an alternative income for these locals by renting the elephants, and thus paying a monthly amount for the elephants to not work. Often, owners are happy to see their old elephant retire and be happy at the sanctuary, instead of having them work in the tourist industry.  Many of these sanctuaries spread across Asia welcome volunteers and tourists alike to see elephants roaming free, and this should be the place you support on your travels! Just be aware that the term “sanctuary” is often misused these days, and do your research on the place you are going before supporting it financially!

While you can find few places in South Africa where you can ride elephants, the most pressing issue for wild African elephants is of a complete different nature. Whether it being overpopulation, fighting for resources or the lucrative ivory trade, the elephant is often coming out short. However, in some countries it has been possible to work out a solution. An example of a project that is trying to mitigate elephant-human conflicts is our Desert Elephant volunteer project in Namibia. This rare population of Namib Desert elephants has grown in the past 20 years, from as low as 52 members to a current population of over 600 elephants thanks to conservation efforts. However, this has put lots of pressure on the water and grazing supplies of the areas, which are also occupied by farmers. The project has for almost 15 years managed to work with the communities and mitigate potential conflicts, by building alternative water points and protective structures around existing ones. 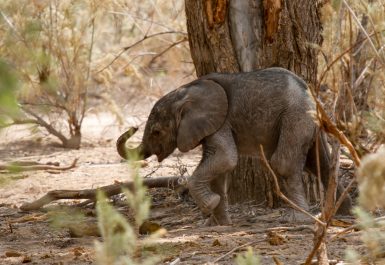 At this project, volunteers have helped build no less than 176 protection walls and around 10 alternative drinking points. Funds from volunteers have also helped contribute to their education project, which helps communities understand how to live safely with elephants. Around 2,000 local community members have taken part in it so far, and still counting! There wouldn’t be a sustainable future for the elephants without including the communities.

I have been so lucky to experience wild elephants in Africa, when I volunteered in Ghana. For a weekend, we went to Mole National Park. Our base was beautifully located allowing us to view the entire green and lush park from above. We got the opportunity to go in small groups with a ranger on a walking safari, and were taught about the animals we met along the way. For instance, did you know that one of the most dangerous animals to elephants are ants?! I’ll let you think about that one! Eventually, we made it down the hills to the plains, where rangers had found tracks from elephants. Not long thereafter, we arrived at a small lake. Here, I got to witness something I’ll probably never see again. A whole family of elephants bathing in the lake. They were in so deep that they only had their trunks above water to breathe and smell us humans from a distance. Eventually, they all came on land and I was only few meters away from an animal that I’ve always admired so greatly.

I didn’t realise until the next day, how fortunate I had been to see them up close. I think we all have the idea that wildlife is just going to act according to us. Maybe it comes from the fact that most of us will only ever see these types of animals in ZOOs, where you will be able to see them when you feel like. However, when it comes to Africa, guess what, they don’t act according to our schedules or wishes. The next day, a few other volunteers went to go on the walking safari, and the elephants were gone. I had been so lucky that the elephants were in our area at the same time as us. The fact that one elephant then decided to visit our camp the next day to eat off the trees by the pool, was just another lucky coincidence and example of how wildlife will go where it pleases!

This was four years ago, and was happening at the same time as I was writing my thesis on the illegal ivory trade. In 2013, there was little research done on this topic, and writing your entire thesis on it proved somewhat difficult. I succeeded, yet being an active follower on the situation and plight of elephants, the future still hasn’t improved a lot for this amazing, intelligent and loving species. This is why I encourage YOU to be part of the difference that the elephant needs. People are the cause of the problems, and thus only by having enough people to stand by the solutions, will we hopefully be able to save the elephant for generations to come.