Arriving in Grenada’s international airport marked the start of my five week adventure in Caribbean paradise, where I will be working with the Ocean Spirits Leatherback Sea Turtles project and on coral reef conservation in Carricaou. 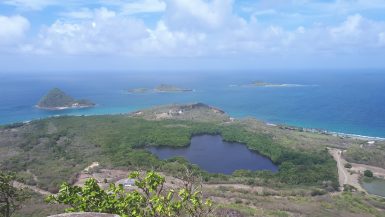 After a tiring ten and a half hour flight from London, I was pleased to be welcomed by a smiling face at the airport with a taxi already having been organised and waiting to take me to my first destination. Another fairly long trip was to come before I reached my first accommodation with Ocean Spirits in the north of the island, however it was surprisingly pleasant. The one and a half hour taxi trip took me right from the airport in the south, all the way to the north where Ocean Spirits work, giving me the chance to dissect the whole island and give me a good initial understanding of where I was and the sort of country I was in. What I saw on the journey was a very diverse and colourful landscape, from vast open hills and rainforests to bustling towns with houses painted with every colour of the rainbow. Vibrant music and people are also seemingly a huge part of the culture here, wherever I go I hear some sort of music, usually reggae, being played out on maximum volume.

Eventually I arrived at the volunteer house for Ocean Spirits in the north of the island, where I had a very welcoming greeting from the managers of the project Kate and Kester, as well as the residential co-ordinators and other volunteers who I would be living with. The house itself is very nice given the rural location and poor standard of living seen throughout most of the country on the drive up. The bungalow style house is raised on a hill giving it a beautiful outlook to the ocean and surrounding small islands. It also has a small but useable kitchen, a large living room, balcony, two bathrooms and three shared bedrooms. I have been put in a shared room with two other men, but there’s plenty of space for the three of us to live comfortably. My first night was spent sharing a meal with all the volunteers on the balcony overlooking the ocean. 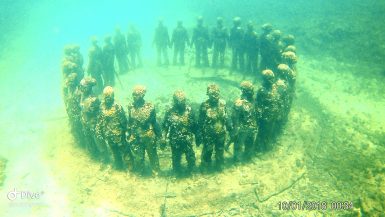 As the week continued I was initially taught the house rules and regulations and how chores would work. There is a rota created each week whereby everyone shares out the jobs each day. Cooking, cleaning the house, sweeping the car, morning surveys and night shifts are all things that have to be rotated. It seems to work out that we will each have one or two jobs a day, leaving us with plenty of free time to explore the island. I have tried to use this free time to explore as much as possible. Initially I went down to the local beach and saw the beautiful coastline that is a mere ten minute walk from my new doorstep. The Bathway beach is lined with palm trees and a fantastic expanse of yellow sand, while there are also tide breakers in the ocean to allow for relatively safe swimming at the shoreline in the warm waters. One mistake I will not be making again however is doing this trip during the midday heat, as it is quite a hill back to the accommodation!

I have also taken a trip to Dragon Bay in the west of the island, where I and other volunteers got the opportunity to go for a snorkel and see sunken statues in the crystal waters, before having a few drinks at the local beach bar.  Considering that we were out most of the day the trip only cost me around 30EC$ (around £10) combining bus travel, drinks and dinner on the way back. We also took a hike up to welcome rock, which is a small mountain/large hill just outside of our house. The trek took about half an hour to get to the top but the views of the whole of the north of the island were well worth it given the perfect weather on the day. 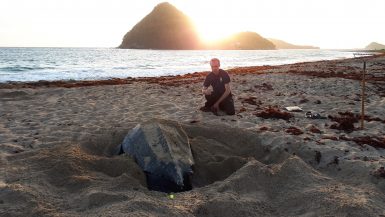 The main reason I am here though is to work with Leatherback Sea Turtles and I got my first chances to do so this week, completing three night surveys in total. The night surveys involve working from 7:30pm to around 6:30am, so it’s a good eleven hour shift of hard work with turtles. On my first shift, I was merely hoping to just see a turtle, but was lucky enough to get two right next to each other on my first encounter! The sheer size of a Leatherback is what hits you first, with adults growing to around 3 metres in length, making it the third largest reptile in the world. I’ve worked with or seen hawksbill, loggerhead and green turtles before but all of those are dwarfed by the Leatherback by up to three, four or five times! Prior training is given for the work but learning on the job seemed most effective, with turtle measuring, egg counting, activity recording, nest location measuring and tagging all needed in some cases. Placing my hand under a huge turtle as it lays 40-150 eggs is something I would have never thought I would be doing, but I was thrown straight in the deep end and it was truly a breath-taking experience to be able to do so. I have had 20 different turtle sightings within my first week and even got to name a new one that I got to tag, I can’t wait for next week where I hope to see even more turtles and explore the island further!