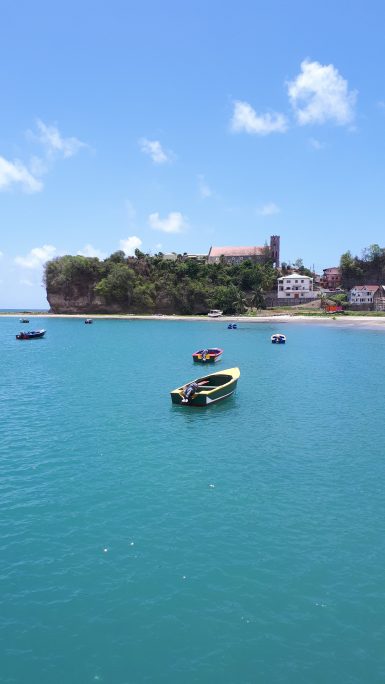 My second week Is now coming to an end and my experience in Grenada is only getting better as time goes on, not only have I seen another eleven adult turtles nesting this week, I also got my first baby hatchlings! I’ve also got to visit a host of new exciting culturally interesting and natural beautiful sites this week as I get the chance to explore more and more of the island with my new Ocean Spirits friends.

Now that I have become more confident with the night surveys this week I feel as though I can explain exactly what we are doing here at Ocean Spirits. Each night survey aims to find nesting leatherback sea turtles (or other species at different times of the year) across the length of Levera Beach, which is about a five minute drive from the volunteer house. Nights usually start at around eight in the evening and begin by splitting the group into two teams, usually of between 2 and 5 people. Each team will then take it in turns to walk the length of the beach, which takes around 15 minutes. Once they reach the end of the beach they will wait 30 minutes and then walk back to the beach hut, where the other team will be waiting, who will then proceed to do their run of the beach after waiting another 30 minutes. This means one run of the beach will take about an hour, assuming there are no turtles along the stretch. If there is a turtle or multiple turtles then each team may be out for much longer, between two and four hours, as there is a long process of data recording needed for each turtle, however this does allow for the other team to get some sleeping time in.

If a turtle is found then first of all the time at which she is found must be recorded. We must then record what she was doing at the time at which we found her which takes some training and experience to identify. Emerging is the first stage of the nesting process and is when the turtle is first coming out of the ocean and pulling her 100lb+ body up the beach in order to find a suitable nesting site, a process which can take between five and twenty minutes. The next stage is called body pitting, this is where the turtle flaps her flippers to try and hunker down flat in the sand and reach some cooler sand, in order to be comfortable to lay, a process which could take up to thirty minutes to complete before she is ready to move into the next stage which is digging an egg chamber. Watching a turtle dig an egg chamber is pretty amazing to see as her back flippers are surprising dextrous and act like a cupped hand to pull sand out and create an egg chamber as deep as her rear flippers, which tends to be about as deep as my arm length. Once the turtle is happy with her hole she will start to lay, which is the laying phase and once this is done she will camouflage (cover up her nest and tracks) which is probably the longest event taking up to forty-five minutes. 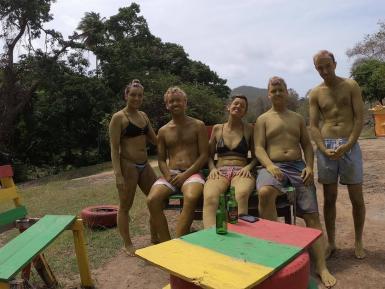 Once you have determined the phase at which she is in you must then wait until the digging stage before you can approach the turtle and collect the other necessary data, so not to spook her at the vitally important time of coming up to the beach. Data that needs to be recorded includes the turtles tag numbers (these will need to be placed onto any new turtle), any injuries (usually shark, tagging, boat or fishing net related) or parasites on the turtle, the length and width of the shell, the location of the nest (usually done at dawn) and most importantly the egg count. Any new turtle also gets to be given a new name, so far when I’ve been out my team has seen six new turtles and have been named; Rafa, Blastoise, Squirtle, Stevie, Dory, and Donatella! In order to do the egg count, one person will put on a latex glove and get their arm under the turtle in order to count the two types of eggs accurately, that have been laid. There are both yolkless and yoked eggs that need to be counted, the yoked eggs are the ones that have the possibility of hatching and are cue ball sized. There will usually be more of these than the smaller, often deformed yolkless eggs which will not develop into hatchlings. If the eggs are being laid in an area deemed unsafe then things get even more complex, whereby they will need to be taken out of the chamber if they are too close to the sea, the car park, if there is water in the egg chamber, or if another nest has been dug up in the process. 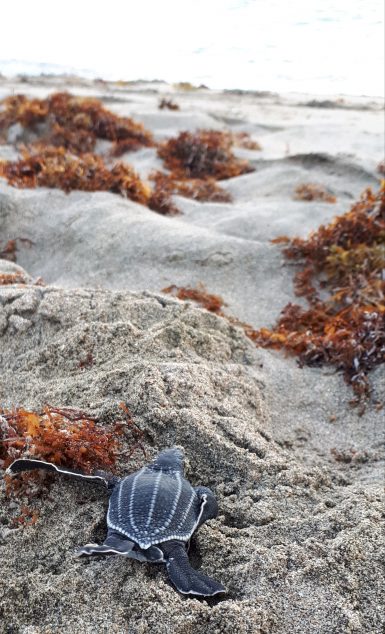 All this becomes much easier to remember and carry out effectively which practical experience and time and is something which I have greatly enjoyed learning over the past two weeks! As well as carrying out this data collection on the adult turtles I finally got to see some hatchlings. After hoping and praying to see them for the current duration of my stay I saw five tiny babies making their first tentative steps towards the ocean. They are a bit clumsy and confused at first and some need flipping the right way or a nudge in the right direction, but it was truly an amazing experience to get to see this wonderful natural phenomenon! The babies are probably only four to five inches long and if they are lucky enough to reach adulthood will grow to be two to three metres in length.

As well as these amazing experiences during working hours, I’ve also had the chance to explore the island even further this week. Early on in the week, all the volunteers visited sulphur springs. This is a rural spa within walking distance of the accommodation where you are covered in exfoliating mud and then allowed to sit in the natural sulphur springs to wash it off. Although I’m not the greatest fan of spas or pampering I must say my skin does feel much smoother now! We also went on a big group trip of around ten people to the Golden Falls. Grenada is covered in waterfalls due to its mountainous terrain but these are one of the more untouched falls, whereby the hike (which involved abseiling) is much less tourist-friendly and far more natural. Once we reached the falls we were more than ready to jump in the plunge pool to cool off! I also took a trip to the local town of Sauters for $2.50EC (around 75p) each way, to get some lunch and go for a swim. Kate was also kind enough to take us to the rum and chocolate factories on the island where we got to see all the production process as well as eat and drink far too many freebies! Next week is my last with Ocean Spirits before going to Carricou and I hope it will be another exciting one.