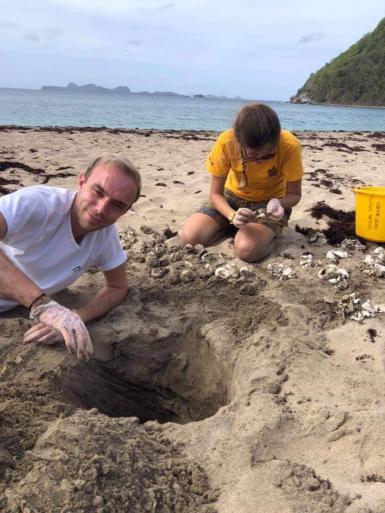 As I entered my final week on the mainland of Grenada I wondered whether It could possibly live up to the previous two, however new experiences, adventures and people, made sure it was another week I will never forget.

I had another three night surveys this week where I got the opportunity to see a further twelve adult turtles and five baby hatchlings! This was probably my most enjoyable week of night surveys as this week we had a lot of veterinary and medical students from the capital’s university, come out with us and volunteer to assist us with our work. Meeting these new people, all of whom were studying Americans, was great fun and made the experience even more enjoyable, especially when I got to teach the vets what to do as well as see their reactions to seeing these amazing creatures at work!

The work hasn’t only involved night surveys however, as I have also taken part in weekly morning surveys and beach profiling. Morning surveys (which take place at 5:30 am) have involved walking the length of the local Bathway beach, which neighbours the night shift beach, to see if there has been any activity overnight. Although I haven’t seen any activity on these runs in my shifts, some of the other volunteers have seen evidence of a few nesting turtles, hatchlings and unfortunately poaching activities, on the beach that is not protected at night. Beach profiling, on the other hand, has involved taking measurements at regular intervals all the way along the Levera (night survey) beach, between markers, vegetation and high tide marks, to get an idea of the profile of the beach and how it is changing year on year and within nesting seasons. This is vitally important information to collect as we know from previous years that certain sections of the beach will ‘shrink’(become thinner between the vegetation and ocean), such that if we see a nest laid at this point early in the season, we know we must relocate as it will be engulfed by the ocean at a later date. This shift takes place around midday to early afternoon, so is one of the hottest, but also one of the best if you’re lucky enough to see a turtle in the day as this offers the best picture opportunities! 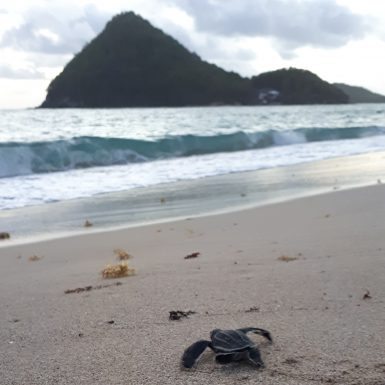 Nest excavations are something new I was also introduced to this week, which made the last few days all the more interesting. When we got out on a night survey we always leave a marker in the successful nests at night, in order to measure an accurate location for each nest in the morning using markers at the back of the beach (marker is later removed to prevent poaching). This is so that when we see a nest hatch and take a second measurement, we can look at when this nest was laid so we know when it’s safe to excavate (over 70 days from laying). When we then spot successive hatchling events from the same location, which usually start around 55-70 days from laying, we measure again and go locate the hatched nest during the day assuming it’s been over 70 days since the eggs were laid, to allow for all possible living hatchlings to emerge. The excavation process itself is pretty fascinating and involves a little bit of training to fully understand. Basically, once we find a previous nest that we know has had hatching events at least three times (Leatherback babies don’t all emerge at once they usually come out in 5-20 hatchling at a time over a week), we go and dig it up/excavate. This is probably one of the most interesting and most disgusting experiences I’ve had in my life, as it turns out over 50 days of baked eggs and turtles makes for quite the rotten smell and soup! A lot of the eggs come out hatched (our Leatherbacks have around a 35% hatch success rate), however many eggs we find unhatched or partially hatched with dead turtles. Unhatched eggs are counted and the stage of development at which the embryo got to is recorded. It’s incredibly interesting to see all the stages of Leatherback turtle’s creation from the nucleus, to the embryo, to turtles with egg sacks, to full-sized babies! If you’re lucky you may find a live turtle buried and be able to rescue it! 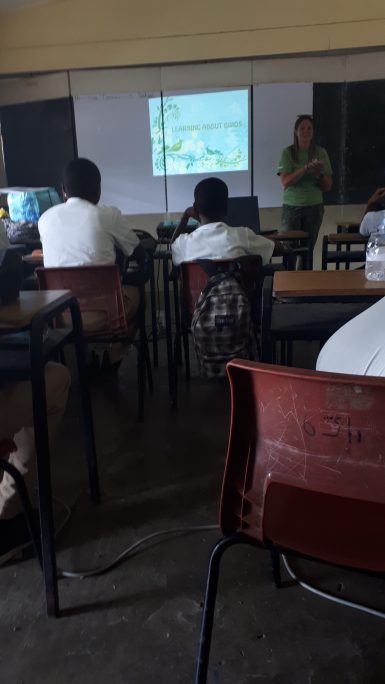 I also got to go on my first trip to a local school this week. We have also done swimming schools on the beach with local children, but this was my first into a school. We went into the Hermitage school, around a ten-minute drive away, and taught the children about the bird life of Grenada. Kate did a short presentation about local birds and how to identify them, as well as about their physical features. We then got to join in and go on a scavenger hunt with a small group of children each, trying to find some different animals and natural features, as well as a few different Grenadian birds using binoculars, which the children absolutely loved using! A quiz was also done and winners were awarded with jazzy pencils, but we ended up giving everyone one, something they all appreciated!

Something I’m yet to discuss is the vegetarian diet that we have to abide by here at Ocean Spirits. We are allowed to buy our own meat to add to a meal if everyone agrees to it, or go out and buy meat based meals which I have done a few times. Nevertheless, I have actually really enjoyed the food, despite previously fearing the worst as a self-declared carnivore in England. Luckily we are all pretty good cooks and we have done pretty well with the food provided. Some of my personal food highlights have been pizza, lasagne, paella, burgers and a variety of curries!

This last week also saw us take a group trip to Sandy Island, which was probably my favourite expedition so far. Sandy Island is a beautiful uninhabited island and is exactly what you would expect from a typical tropical small island, covered in golden beaches, palms and surrounded by a coral reef, which we snorkelled extensively! 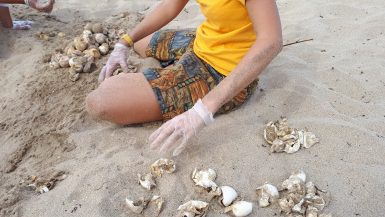 My highlights of working with Ocean Spirits would be difficult to pick because there have been so many great experiences, but if I had to choose I would say seeing the hatchlings and meeting a whole load of great new people as my two best experiences of the trip. Overall I have done nine nights surveys, seen 40 adult turtles (9 of which were new), 10 baby turtle hatchlings, 30 successful nests, 2780 eggs and applied seven new tags to adults, making for a pretty amazing experience overall! I’ll miss my new friends and turtles that I’m leaving behind but I’m excited to spend my last two weeks in Grenada on Carriacou learning to scuba dive and monitoring the coral reefs!

To find out more about our Sea Turtle Volunteer Project in Grenada, please click here.