Eating vegetarian can seem like a bit of a challenge when you travel and do not know what to buy in your new host country, especially when you are halfway across the world in India. Initially, when in a new country to volunteer, it is essential to become familiar with your new culinary environment as soon as possible to not be limited in what you can eat and continue eating as healthy as possible. The good news is that India makes being a vegetarian extremely easy. 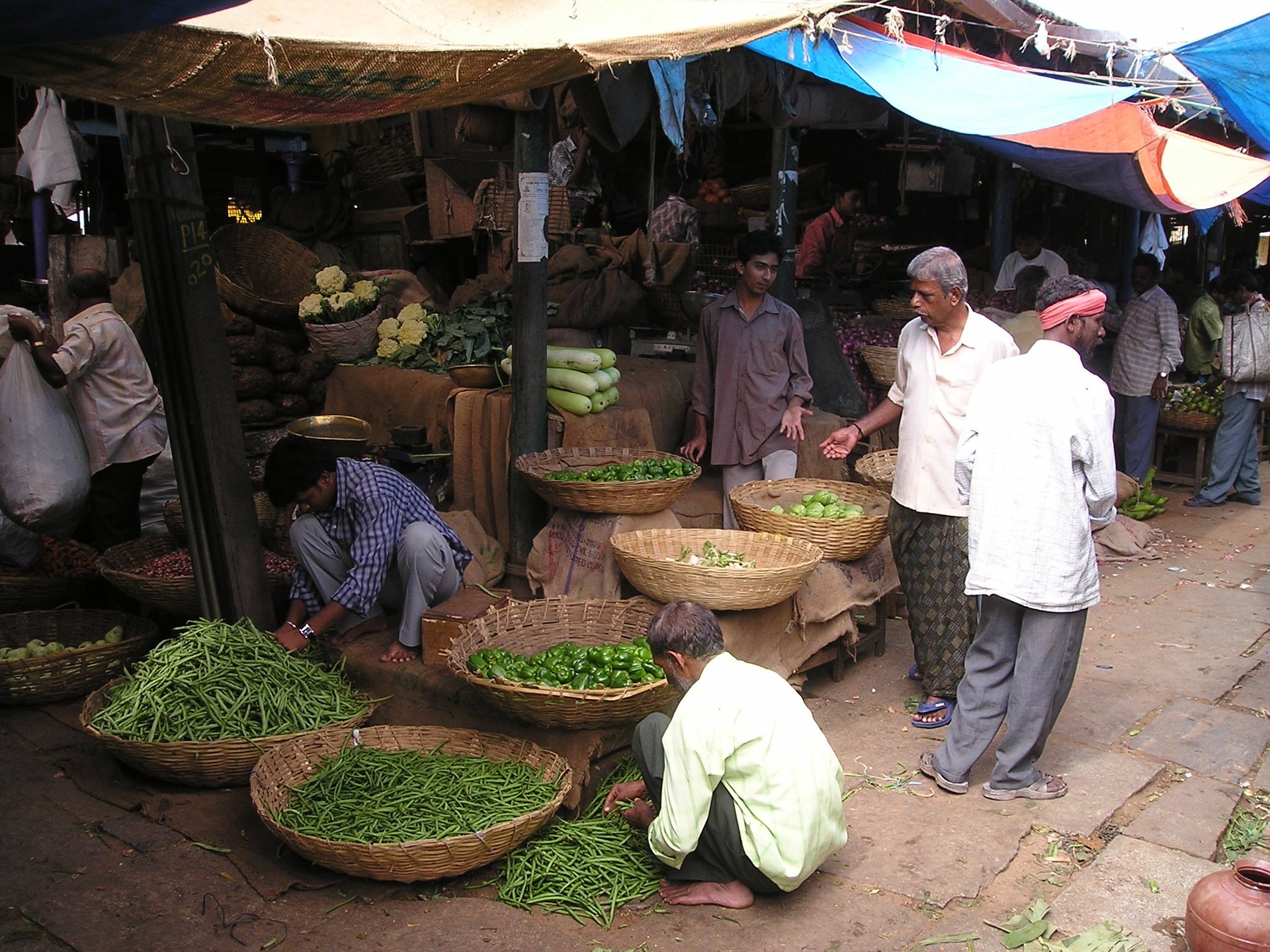 Around 40 % of the population in India are vegetarian. Rajasthan is the state with the highest percentage of vegetarians at 75 %. The state of Gujarat is also home to the first city in the world that was declared vegetarian, Palitana. In this city, it is completely illegal to kill animals for eating purposes here, and selling eggs or meat is also off the cards.

India has the world’s second-lowest meat consumption per person. The vast number of vegetarians in India do this for religious reasons. The majority of Hindus are Lacto vegetarian meaning that they avoid meat and egg. Beef is always avoided because the cow is considered a holy animal, but dairy products are eaten. A certain portion of the population is Jain. This is one of the oldest Indian’s religions. In addition, to being Lacto vegetarian, Jains also avoid root vegetables and some types of fruit. The Northern states of India make up most of the vegetarians in the country. Out of 29 Indian states, 20 prohibit cow slaughter. However, the export and import of beef is prohibited under current trade laws.

Ghee plays an important role in Indian cuisine as a base for many dishes. This is a clarified butter suitable for frying as it does not produce smoke. Although ghee is rich in fat, it contains high amounts of omega-3. These healthful fatty acids support a healthy heart and cardiovascular system. Ghee also contains a number of other vitamins, such as vitamin B12 which cannot be found in plant-based products. Ghee out of the fridge is a bit thick, however, so it’s a bit difficult to spread. Ghee contains a lot more flavour than normal butter, so use sparingly.

There are a number of other things you will find in the kitchen of a typical Indian household. Paneer, also known as Indian cottage cheese, is used in a wide range of dishes, such as paneer butter masala, and is also often deep-fried. Chana “chickpeas’ and dal “lentils or pulses” often present in curries also help vegetarians and vegans get sufficient protein.

Make sure to invest in some masala. Masala is typically used in all meals. The most famous of these is called Garam Masala, which typically includes clove, cinnamon, nutmeg, cardamom and several other spices — including cumin, coriander, pepper, fenugreek, turmeric and nigella. The masala spice blend can either be wet (a paste) or dry (a blend of dried, often toasted and ground spices).

Although a lot of locals buy the raw ingredients and grind them to make their own powder, you can typically buy the masala dry powder at any local street vendor for about 60 rupees (around 60 pence). Spices are a big part of Indian medicine and are thought to increase immunity. Sabzi masala is another common all-purpose spice mix that can be widely bought in stores.

Indian cuisine is extremely varied and includes a number of different flavours and textures. Meals typically include each of the six tastes in each meal: sweet, sour, salty, bitter, and umami. All these tastes in one meal, leaves you feeling satisfied. As Indian food is so flavorful, sauces are not typically served, except for chutneys which are classed as thick sauces. If you still feel like you need some ketchup however you can invest in some Kissan ketchup at a supermarket, which is claimed to be made with 100 % naturally ripened tomatoes. 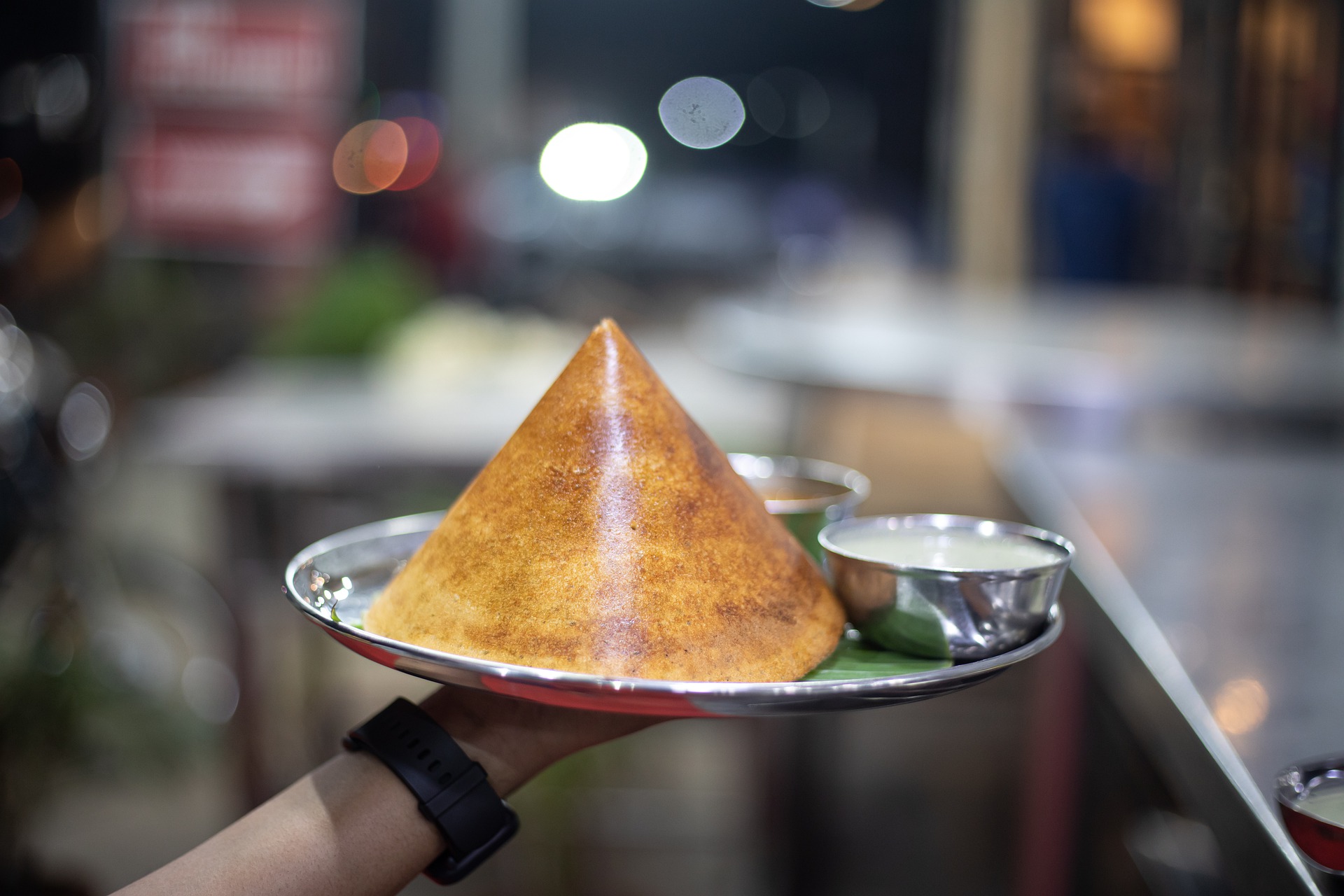 As in any country, the choice on the menu varies greatly as you travel across India. There are still lots of vegetarian options wherever you are but the dishes are divided according to the region. There is typically a significant distinction between Northern and Southern cuisine.

The dosa originates from the South and is a thin pancake (similar to a French crepe) made from a fermented rice batter, that may also include lentils in the mix. The dosa is typically filled with potatoes, carrot, ginger, paneer and other fillings before being rolled up like a taco. Dosa is made using a Tava. The Tava is a commonly used frying pan made from cast iron or aluminium and is a bit like the wok used in Asian cooking. Coconut chutney made with fresh coconut, also originating from the South of India, pairs beautifully with breakfast and snack dishes like the dosa.

The North of India is known for the paratha. This is a flatbread that is often layered with ghee and stuffed with potatoes, peas, onions and paneer. Fibre-rich coriander chutney is often served with the paratha.

Poha or flattened rice is a common breakfast item. As it is parboiled beforehand, it can be eaten with little to no cooking. Some even eat it raw, by immersing it in milk or water, with sugar, salt and a number of spices to taste. You can even buy ready to eat Poha in plastic jars, which require the addition of hot water similar to instant noodles. Ready to make paratha are also available to pop quickly on the tava frying pan.

Puffed rice, known as muri in India, is perfect for breakfast or even as a snack when watching the movies. There are a number of ways to eat puffed rice, such as cereal, and also lots of low-calorie puffed rice snacks you can buy in the shops, including rice cakes. Alternatively, if you are feeling brave you can make your own puffed rice at home
in hot oil. 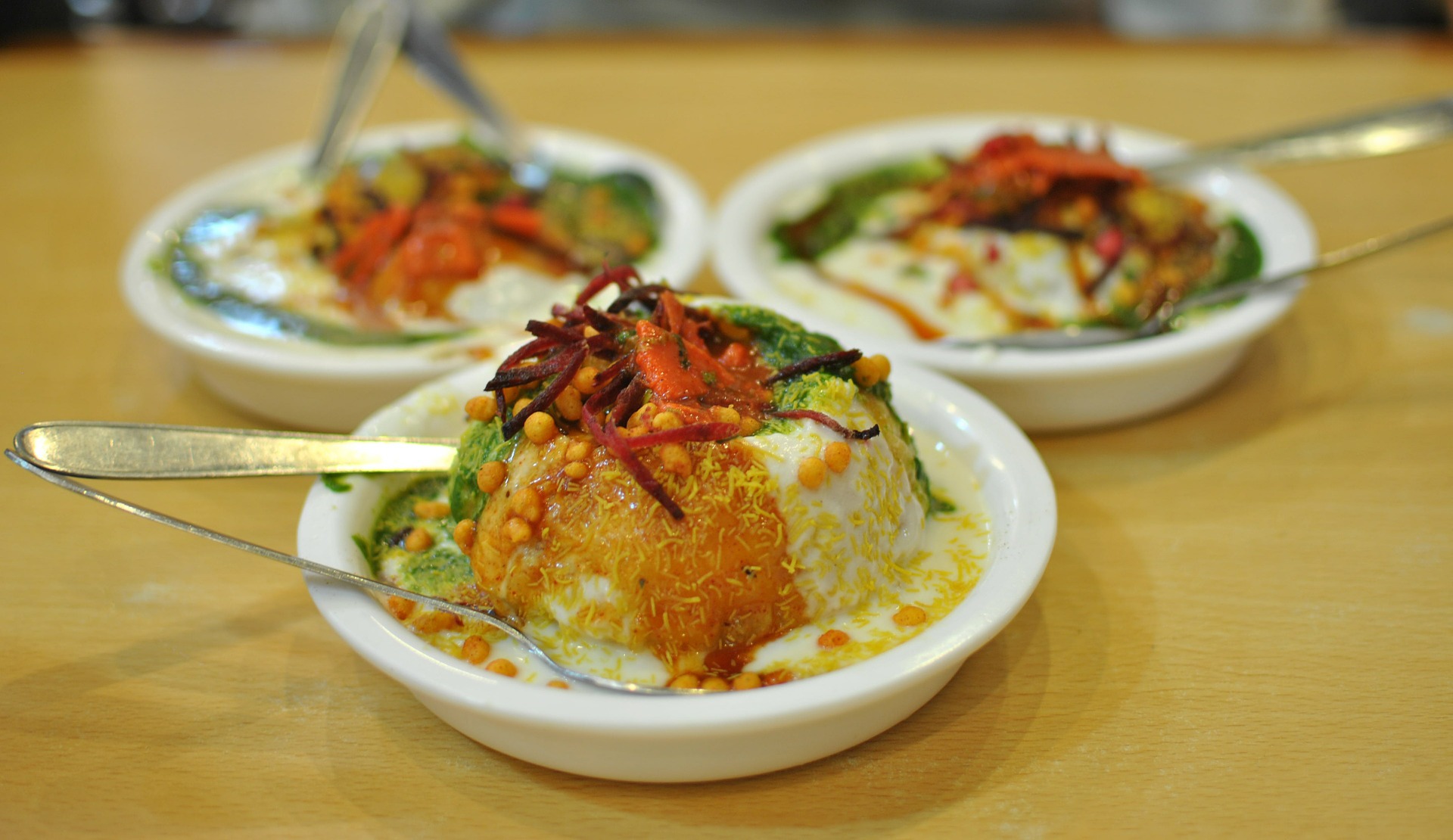 When in need of a snack

There will be times of course when you cannot plan your meals ahead and are in need of a quick snack. Roasted chickpeas “chana”, high in plant-based protein, are crunchy and satisfying to chew on the bus for example. They are widely available in the shops but can also be made in the oven at home from already cooked chickpeas with your preferred spices.

Sprouted mung beans can be bought in the markets in the morning, and topped off with a dash of lemon, salt and sugar for another nutritious crunchy snack to keep you going during the day. The sprouted beans are typically only available in the markets in the morning to ensure that they are still fresh, so avoid buying in the afternoon if you see them.

Go out and explore the variety of exotic fruit on offer at the markets, including custard apple, starfruit, jackfruit, Indian hog plum, carandas cherry, amla berry and many others. If you are looking for a fruit unique to India, try the phalsa, also known as the Indian Sherbet Berry. Berries are the fruits with the highest antioxidant content, so give this sweet-sour summer fruit a try.

If you are craving some quick street food, deep-fried vegetable fritters consisting of onion, sweet potato, sweetcorn and many others are known as pakora, can be bought on the streets. Just be too careful to not overdo it as it is high in saturated fat. Momo, steamed bun dumplings, or samosa, fried or baked pastry in a number of shapes including triangular, cone or half-moon, can also be bought with a number of fillings.

Regarding drinks, the lassi, originating from Punjabi culture, is a blend of yoghurt, water, spices and sometimes fruit and is perfect for those looking for a quick sugar boost. Golden milk is an Indian drink that has been becoming popular in the West. It is a bright yellow drink made by warming plant-based milk (soy, almond, oat etc) or cow milk with turmeric and other spices, including ginger and cinnamon. It is perfect before bedtime due to its relaxing properties and can be easily made at home.

Maggi, owned by Nestle, has got several instant noodles that appeal to the health-conscious Indian market. These include noodles made from atta (wholewheat), dal (pulses rich in protein). With salt being less than 1 g per serving (100 g), these instant noodles can make a reasonably healthy meal in less than two minutes when part of a balanced diet. 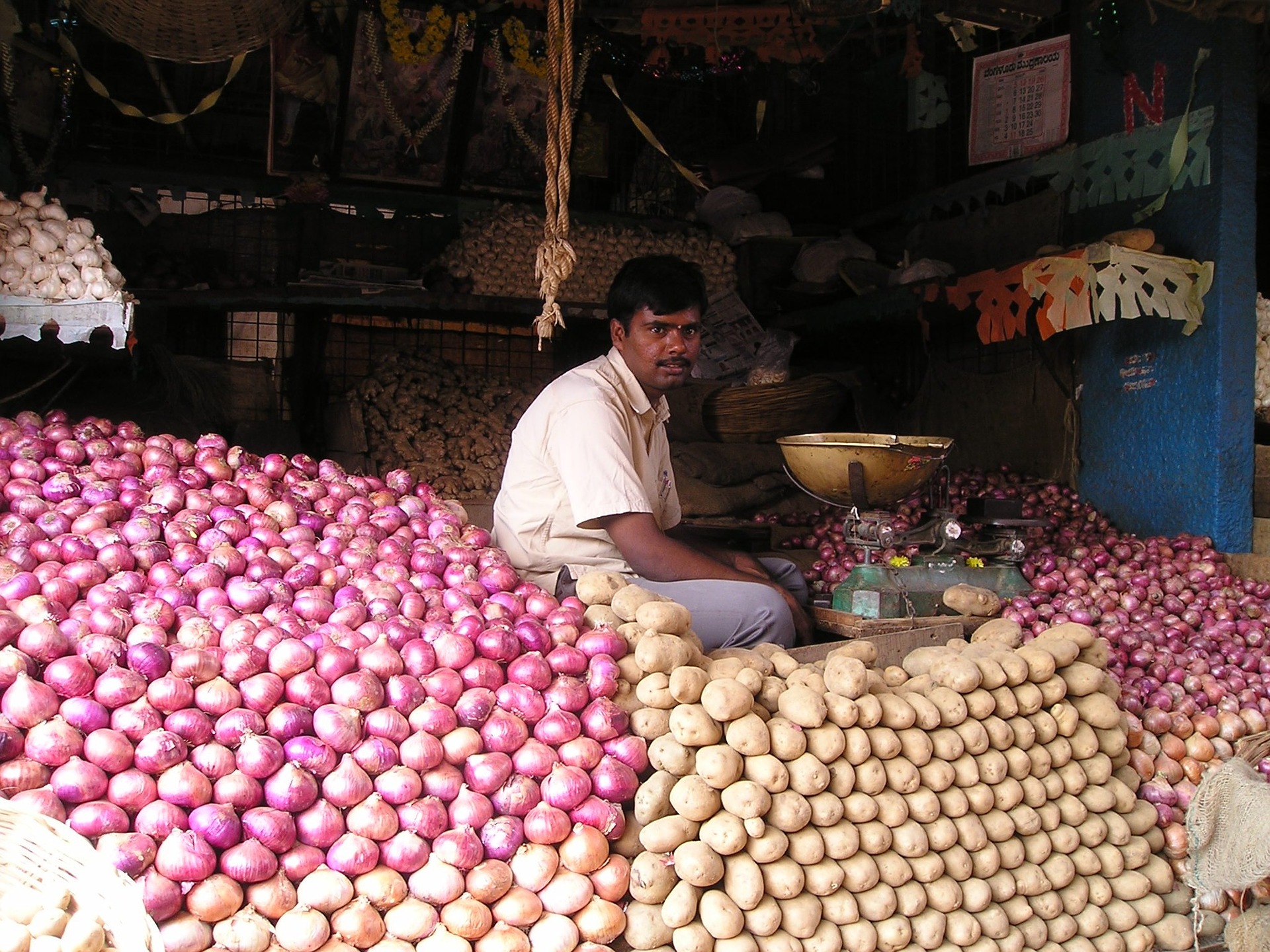 When buying processed products at the supermarket, look out for the green vegetarian mark, a square with a green circle inside. This means that the product is Lacto-vegetarian, so contains no meat or egg products.

Hopefully, you can see that volunteering and eat abroad in India as a vegetarian may be easier than you thought. Looking to volunteer in India and experience the culinary delights for yourself? Visit our India page, to find out about current opportunities including the Elephant and Bear Volunteer Project.

For more about the history and culture of India click here.

The article would not have been written without the help of Shubhra Singh. Shubhra hails from the North of India (Uttar Pradesh state) and has been a vegetarian her whole life. Shubhra has recently moved to Taiwan to pursue a PhD in Agricultural Sciences and hopes to complete a project on how the plant defence mechanisms can be activated through DNA sequencing. I appreciate the time Shubhra gave me to understand vegetarian Indian cuisine.