“All curious travellers keep Granada in their hearts, even without having visited it”. 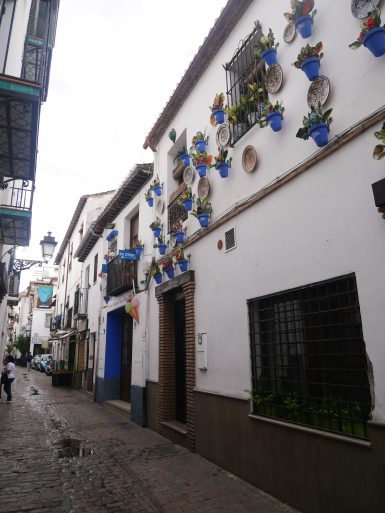 And it is no wonder, for as the sun sets over this beautiful city, I begin reflect, watching as the shadows finally creep their way in, overtaking the graffiti-covered walls of narrow streets. Hues of orange and yellow blend together just beyond the city sky, waiting for twilight to set its way in. Such a beautiful array of colours, one can only dare to imagine the creation of its awe-inspiring beauty.

Located at the foothills of the Sierra Nevada mountains is a city rich in culture, as its history dates back to the 5th century BCE when it was known as Elibyrge, an Iberian settlement of the Roman Illiberis. Being the seat of the Moorish kingdom, it was the last stronghold of the Moors until eventually falling to the Catholic monarchs Ferdinand II and Isabella I, in the month of January 1492.

Though despite being conquered nearly 528 years ago, the architecture of the Moorish people and their influence of culture continue to thrive. The epitome being what is considered by some to be one of the ten wonders of the world, The Alhambra. It was constructed between the 8th and 15th century, and sits atop the Darro Valley with the sharp sculpted peaks of the Sierra Nevada Mountains posing as its backdrop.

It is a bit deceptive from its outward appearance, appearing to be little more than a well-fortified structure. However after passing through its gated doors and walking past the walls of the defensive stronghold you find yourself caught off-guard by the intricate beauty that is hidden within. For while this place served as a fortress of military defence, it was also a palace and a city, adorned with fabulous gardens, lush with fauna and aromatic smells situated around pools of cool water. Beautiful sculptures and monuments can be seen all throughout and upon the ceilings, columns, and walls are intricately carved writings..some of which are pieces of poetry, others scriptures from the Qur’an, and yet others still, pious wishes all immortalized side by side within the stone of a palace that has stood against the ages, watching as the civilizations both rise and fall. 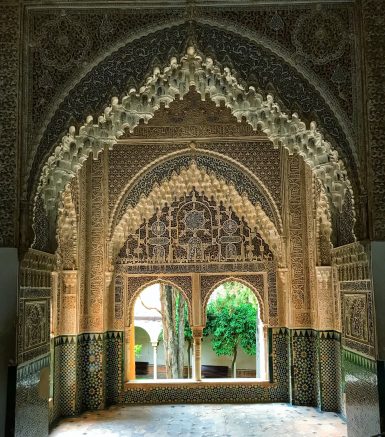 Outside of the Alhambra, and back out into the streets, people are moving back and forth, going about their day more care-free and relaxed than almost anywhere else in Spain. The streets are littered with tight alleyways, and tall white townhouses, covered brick walkways and graffiti art. Tapas bars are everywhere, and on nearly every street corner you can smell the aroma of Shisha floating throughout the air as it makes its way into the streets, luring people to a local hangout, hidden far from the mid-day sun.

As you make your way across the districts you come across ancient waterways, chapels, and cathedrals; some of which date all the way back to the 15th century. But within the plazas are monuments and shops, carrying textiles and clothing, trinkets and antiquities, all the way from across the Mediterranean. 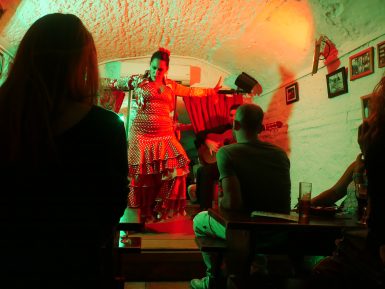 In all, Granada is a great example of how two cultures blended together beautifully, making the city what it has become today, a cultural epicentre filled with people who are well connected to their roots and proud of who they are. It is a city where I wish I could’ve spent more time in, even though I cherished every moment there. A place where the people are warm and welcoming, and the atmosphere cool and relaxed. It has a social vibe that is so rich in culture it brings people from all over the world, and it’s no wonder why nearly two million people visit this city every year. It is just one of those places that stay with you for all your days. She will linger deep in your heart, mind, body, and soul. And you will never forget her, or her name…Granada.

For anyone joining one of our volunteer projects in Spain, Granada and Andalusia in general are great places to explore before or after your time volunteering!