The Amazon Research and Conservation project is based in the Madre de Dios region of Peru. Their aim is to conduct research on local species, while helping preserve the land and create a corridor for flora and fauna in a region where hunting and timber extraction is predominant. 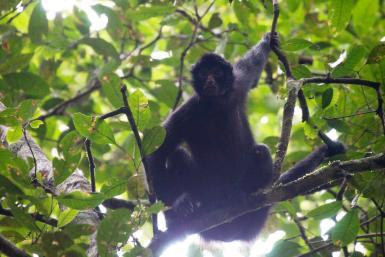 My main role as an intern on the Primate Research programme was to collect ecological data on Black Spider Monkeys (Ateles chamek) with my supervisor. The follows involved GPS navigation and tracking, identification of individual monkeys and filling in data sheets (instantaneous focal sampling method). Data on behaviour, diet, forest level use and location were collected. 1 km of trails were walked twice a month, and data such as fruit quantity, species, and tree DBH were collected. Fruits were identified back at camp using keys in Amazonian fruit and seed field guides.

As I was staying several months at the project, I also got the chance to experience the other programmes. While I enjoyed learning under the other researchers and occasionally helped with their projects, I devoted myself to the development of the primate team and the research on the black spider monkey. Studying a keystone species has given me a deeper insight into how ecological relationships work. I also had the opportunity to develop a transect method, which built upon my second-year learning. Studying one species for seven months meant I gained a huge amount of knowledge about Spider Monkeys, partly due to the lack of internet resulting in ‘manual’ research. 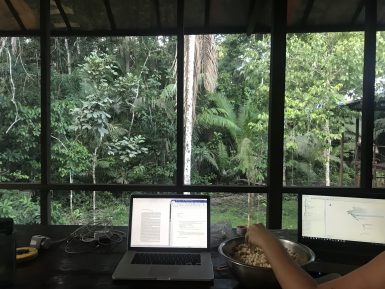 My supervisor and I also co-authored a scientific article which we submitted for publication. It is titled: ‘Demography, Habitat Use and Activity Budget of a wild group of black-faced Black Spider Monkeys (Ateles Chamek) in Las Piedras, South-Eastern Peru.’ Co-authoring and submitting a manuscript for publication allowed me to improve my technical writing skills.

[This was published with the Journal ‘Neotropical Primates’ in December 2019].

“Living outside for months at a time in a tropical climate was very challenging. Wearing dirty/wet clothes, being covered in bites, having limited electricity and not being able to speak to my family really had an impact on my morale. The positive side to this was that I became more resilient and independent, which in turn helped with other aspects of the placement.” 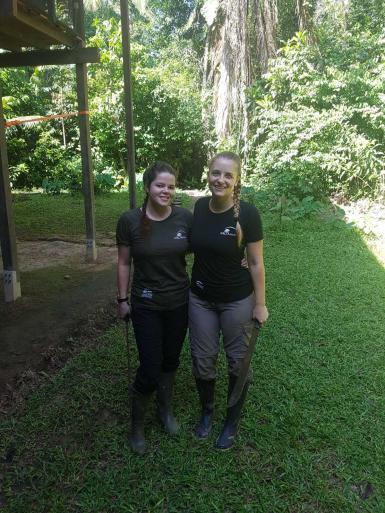 After learning the skills required for primate follows from my supervisor, I was able to lead other volunteers in the field when she was unavailable. I was eventually able to take over her role for one month while she was on holiday. When I arrived, the only task for primate volunteers was to assist on primate follows. During my stay, my supervisor and I created new team projects, which also made me feel that I had made a long-term contribution to the project.

Taking over my supervisor’s job for one month was what immersed me in my placement. One highlight was leading my visiting tutor, his family, and three volunteers to a macaw clay-lick. At first, I was hesitant to accept this role, as it included being responsible for volunteers and in charge of delegating responsibilities to others. However, I saw it as an opportunity to challenge myself and improve upon employability skills. Describing our project to other researchers, volunteers and tourists also allowed me to develop my communication skills, as did working in the field where a lack of effective communication could be unsafe.

My placement year has influenced my career path in that I know I couldn’t work full time in such a challenging environment. However, it has only deepened my interest in biodiversity, and so I am planning on applying for an MSc in Taxonomy, Biodiversity and Evolution at Imperial College London.