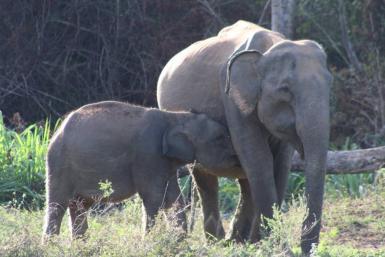 Many of us live peacefully with animals, or at least don’t come into contact with any animals that are going to destroy our livelihoods or threaten us in some way on a regular basis.

Unfortunately, that isn’t always the case though, for farmers around the world the idea of wildlife destroying their crops or killing their livestock is a serious issue which can have disastrous consequences for both them, and the wildlife.

Sri Lanka is one place where this is a cause for particular concern. In 2018 alone 319 elephants and 70 people were killed in the country due to human-elephant conflicts.

It is illegal to kill elephants in Sri Lanka but that doesn’t stop some farmers from taking matters into their own hands to stop the animals from destroying their crops. Farmers may kill elephants in a number of ways, from poisoning and shooting them to using explosive devices.

Most of these conflicts are due to elephants coming into contact with farming in the country, with The International Elephant Foundation stating the animals cause over $10 million in damages to the agricultural industry each year in Sri Lanka. 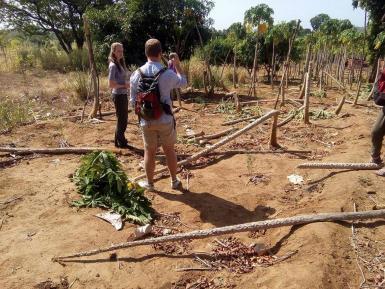 Sri Lanka is very small country and is struggling to balance both its economic interests in one hand and elephant conservation in the other.

One-third of the island is seen as “elephant country” where around 6,000 Sri Lankan elephants live. With elephants living in such a large area of the country clashes between people and the animals are almost unavoidable.

However, Sri Lanka is working to minimise the number of encounters there are each year so that the number of deaths to both elephants and people hopefully decrease. 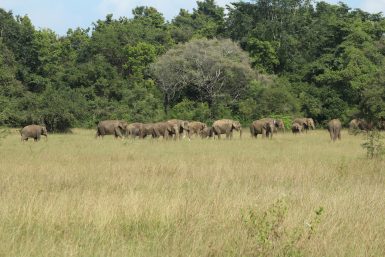 One of the ways being used right now is rather ingeniously simple. Our Elephant Conservation Volunteer Project in Sri Lanka has been planting orange trees as a way of deterring elephants from places such as rural farms. Why? Elephants don’t like the smell of the fruit and will be less likely to wander into areas with it.

As an added bonus this project even provides another form of income for the farmers, as the fruit can be sold to supermarkets so everyone benefits.

Accordingly, this project is ongoing in 12 different villages in the Wasgamuwa area of the country, which is roughly in the middle of the island.

On top of that, the project also has what it calls the ‘EleFriendlyBus’ which has been carrying kids to school through an elephant corridor since 2016. The project is quoted as saying;

“Since launching our EleFriendly Bus in May of 2016, daily school attendance is way up. Local farmers are able to spend more time and earn more income tending their gardens, free from the daily burden of patrolling the elephant corridor to keep their children safe.”

The bus serves as more than just a way to get to school, but also as a teaching tool as well according to the project. The bus is decorated with;

“All sorts of colorful images and educational messages about elephants painted on the interior walls and ceiling. Every ride is an educational experience, and a chance to cultivate understanding among villagers about the plight of Sri Lanka’s endangered elephants,”

Another inventive way the project has come up with to deter human-elephant conflicts is to have farmers raise bees on their farms as well. The reasons for this are pretty obvious, nothing really likes getting stung by bees so the elephants will avoid the area. Much like the planting of orange trees, the bees provide another form of income for farms as the honey can be sold. 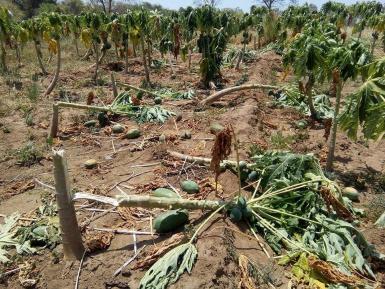 On top of all this the project spends a lot of time distributing guides to the public designed to teach them strategies to help them live in a more harmonious environment with the elephants.

There are of course other ways of keeping elephants from reaching humans such as electric fences, which while not ideal are better than having conflicts that result in the death of the animal or person. There are issues with this idea though as sometimes farmers will set up their own illegal electric fence with too high a voltage which can result in the death of elephants that come into contact with it.

Some farmers also use trenches as a way of keeping elephants away from their crops, but as you may guess this can cost a lot of money and time to do.

Sri Lanka isn’t the only country where elephant-human conflict is a major issue though, a variety of other countries have their own inventive techniques designed to keep both elephants and humans safe.

In Ghana, for example, one technique that is used is to infuse chilli pepper onto clothing and hanging the garments on fences. This is similar to planting orange trees as the elephants don’t like the smell. 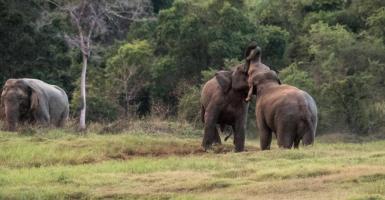 Just north of Sri Lanka in India, they also use a wide range of ways to limit humans and elephants from coming into contact. One way is to capture and release problem elephants in another area, but this doesn’t always go according to plan as the elephants sometimes find their way back to the original location.

In the Hassan region of India though they’ve gone high tech to help prevent conflicts. The region uses an early-warning system that includes the use of text messages, automated voice messages and digital signs to help people keep on top of elephant movements. Authorities have registered over 35,000 people for the text message alerts alone in the region.

The alerts are designed to give just enough information to people, without helping poachers learn the exact whereabouts or size of elephant herds.

Much more work will need to be done though to eliminate deaths due to human-elephant conflict entirely. If this is something you’re interested in and passionate about WorkingAbroad has a volunteer project in Sri Lanka dedicated to helping the elephants, which can be found here.