The term “monkeying around” has taken on a rather literal meaning in India’s major cities, where our closest ancestors are wreaking havoc on the locals and their belongings. Shattered cell phones, stolen property and forced entry into houses are among the collateral damage the primates have been known to cause, with some incidents even posing a threat to the local’s safety. But how have they come to be so bold with their human counterparts?

Enter urbanization. As India fills the need for increasing urban spread in place of its country’s rainforests, the monkeys who once inhabited these areas have been forced to change environments and adapt to city routines. Charming at first and a sacred symbol within the Hindu religion, locals initially enjoyed feeding the monkeys, welcoming the funny, furry creatures into their lives when urban populations grew in the 1990’s. As the monkeys became more comfortable with their new living arrangements however, they soon learned that food and other necessities were easy enough to come across – if they were stolen or forcibly removed. 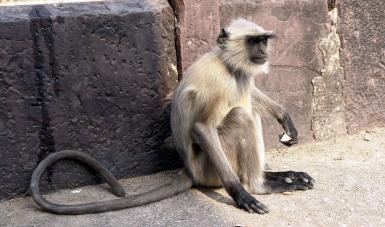 In addition to theft and other disturbances caused by the urban monkey population, there have been a number of reported attacks and even fatalities as a result of their cohabitation. In 2007, the deputy major of Delhi, SS Bajwa, was even pushed off a balcony to his death by a group of wild monkeys. Needless to say, the city’s inhabitants now exercise extreme caution around the animals they once embraced, advising tourists to do the same.

Political powers and animal welfare agencies have suggested sanctuaries as a means to capture and relocate the monkeys, however a lack of manpower to manage the thousands of primates has made this solution a markedly unsustainable one. Another recommendation, sterilization of the monkeys, has for the most part fallen on deaf ears. Scientists are also exploring birth control, either oral or injectable, as an alternative to culling, an unacceptable practice given the symbolic connection to the Hindu god Hanuman.

So how can you be a responsible tourist in a country suffering from a conflict with monkeys?

1. Do not feed the monkeys.

This may seem obvious given the information above, but monkeys are a novelty to many tourists and feeding them might seem like an Indian tradition you just can’t pass up. As tempting as it may be, remember that encouraging the problem only makes life more difficult for those who will share their city with the monkeys once you’re onto the next adventure.

Keep the windows closed (and locked if possible) in your guest room, with valuables securely tucked away in your pockets and bags. A common tip for travelers in any country, these anti-pickpocket precautions apply to monkeys too, who will gladly steal from you given the opportunity.

3. Donate to or volunteer at a monkey sanctuary.

Monkey welfare organizations such as The Primate Trust in Goa rescue abused monkeys while also aiming to mitigate the damage caused by humane/monkey conflict through sterilization and education. By volunteering with this or a like organization, you’ll be able to interact with the monkeys without creating unnecessary problems for the people around them.