The world has been watching Japan lately: it’s been hit with one natural disaster after another.   First came the flooding and landslides at the end of June 2018, then the record-breaking heatwave in July, and now Hurricane Jebi is sweeping through the Western part of Honshu.

The question on many people’s minds is, “Why is this happening right now?”

On the one hand, weather has always been unpredictable.  That’s part of its nature.  On the other hand, evidence and research is suggesting something that’s more concerning – in particular when it comes to landslides.  Let’s take a closer look at Japan.

The landslides that have recently occurred in Japan are a newer phenomenon.  Japan is a mountainous country, which topographically puts it at a higher risk of landslides than a flat one.  But why have there not been more landslides in the past than there are now?  A clue is found right around the end of World War II.  The Japanese government, determined to build up their economy, replaced many of the naturally occurring trees (including those on the mountainsides) with sturdy cedar trees that were deemed more economically resourceful.

The problem that both the Japanese government and people were unable to foresee is that this act of deforestation coupled with over-production of a single tree species made the environment more vulnerable to rainfall.  The roots of the cedar trees are not as resistant to landslides as those of the former trees.  People who have built homes on the hillsides where trees used to grow are also making themselves vulnerable to the elements.  These factors strongly point to evidence for the increase of landslides in Japan.

A look at landslides in other parts of the world also reveal that deforestation is an underlying factor.  For sake of variety, let’s take a look at three different countries on three completely different continents.

Just a quick look at a satellite map of Haiti will give you an idea of the environmental devastation the country has undergone.  It’s brown and barren, while its neighbor Dominican Republic is still rich with rainforest.  Both countries share the same island of Hispaniola.

Tree roots and thick vegetation are necessary to keep soil intact and protect the environment from landslides.  Dominican Republic, a popular tourist attraction with a relatively good economy, does not suffer from soil erosion and landslides.  But the people of Haiti have almost no economic resources.  Because there is no consistent electricity in any city in Haiti, the local people cut down trees for firewood.  Over time this has led to the loss of nearly all the forest in Haiti.  It has also primed the country for landslides.

The storm and landslide activity that happened in March 2012 is just one example among many.  Several people were killed, and thousands displaced.  As recently as this year multiple landslides have occurred in Haiti, causing both loss of property and life.  The seasonal storms in the Caribbean suggest that landslides will continue to be a threat to the people of Haiti, with no quick solution to the soil erosion caused by deforestation.

In the Kashmir area, in 2015, a number of homes along with 18 people were destroyed by a mudslide.  The culprit:  illegal logging of the surrounding area to build new homes.

Jammu and Kashmir are both areas that are originally rich in forest, but removal of these forests are paving the way for soil erosion and consequent (potentially lethal) disaster.  Unfortunately, other areas of India have experienced the same phenomenon.

In Pune in 2014 a mudslide killed between 150 and 200 people.  It followed in the wake of heavy rainfall, as is typical with landslides.  Not surprising as well is the causal connection to deforestation.  In this case, many villagers had switched to farming wheat rather than rice or millet, which required moving to the hillsides.  Poor planning and management led to the unforeseen disaster and loss of life and unnecessary loss of forest.

This year (2018) has seen serious flooding and landslides in Kerala – the worst since 1924.  While part of the cause was attributed to the region itself being vulnerable, part of the cause has also been attributed human intervention: quarrying, mining and building, all of which simultaneously harmed the environment and the human inhabitants.

Sierra Leone is a country that naturally receives a large amount of rainfall.  However, the local residents were not prepared for a devastating mudslide that hit the country last year.  Hundreds were killed and hundreds more went missing.

Why the sudden catastrophe?  Answers point to saturation in the soil due to more excessive rain even than normal.  However, other suggestions went even deeper.

As seen already in both India and Haiti, building of infrastructure and other human activities has lead to deforestation in recent years.  The country has lost almost 800,000 hectares of forest in the last decade.  A devastating civil war that lasted from 1991 until 2002 also contributed to the forest’s decline.  The removal of mangroves, another natural feature in Sierra Leone, in order to make way for development is also a likely factor in causing mudslides – and will continued to be, if more sustainable action isn’t taken.

When a landslide occurs it very often is the canary in the coal mine: a symptom of a greater underlying environmental and even economic problem that has huge implications for the future not only of that area, but of the world. 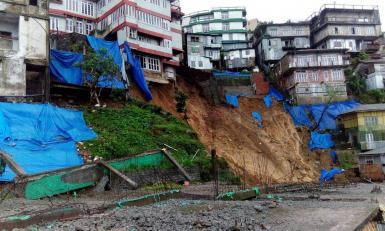 What, then, are the best solutions for preventing landslides and ultimately helping the environment?  Since there is strong evidence that landslides are a direct result of deforestation, it’s imperative to keep the forests of the world as healthy and intact as possible.  Personal measures that can be done to help with this include buying only sustainably-sourced wooden products.  Be aware of the country where the wood in a product came from.  If the country is depleting forests faster than it can regrow them that spells disaster for the environment.

Recycling paper products and buying recycled products also helpings towards protecting forests.  Avoid printing and go paperless wherever possible.  A less obvious but very important way to make a difference is to eat as little meat as possible.  A lot of forests are cleared in order to create land for beef cattle, so reducing or eliminating meat from your diet will drive the demand down.

In cases like Haiti, where the people are depleting trees for their own use rather than for exports the best thing that can be done is to raise awareness.  Oftentimes simply learning about the situation in a certain area will motivate people to help and educate the people affected.  Understanding the motivations and point of view of the people affected is crucial as well.

In every case, being informed on the issue will prepare you for any future conversation you may have with others.  Even one conversational exchange – whether it’s on deforestation or another topic – can change the course of the future in a positive way.