The year 2020 was supposed to be one of celebration for the team at the Ocean Spirits Leatherback Conservation project in Grenada. Last year marked 20 years of conservation, research and sea turtle protection across the Caribbean island nation. Instead, they are facing the biggest crisis of two decades of tireless work, as COVID-19 threatens to significantly undo their progress.

Ocean Spirits began in 2000 as a 5-year research study in north-eastern Grenada, aiming to get a clearer picture of the resident sea turtle nesting population. It found that not only was the Levera beach home to one of the top 5 nesting populations in the region but that levels of illegal egg poaching were also especially high, exceeding 9 out of 10 nests poached at some sites.

Over the last two decades, Ocean Spirits has expanded its objectives and made huge progress in leatherback turtle conservation across the island. As well as continuing to carefully monitor the turtles themselves, the project also runs programmes to educate students from pre-school to University, challenging local perceptions about the way humans and turtles can live alongside one another. They have also developed sustainable eco-tourism programmes to give the local community an alternative to poaching. These initiatives have seen huge success, and as of early 2020, the threat of poaching at Levera Beach was down to below 5%. 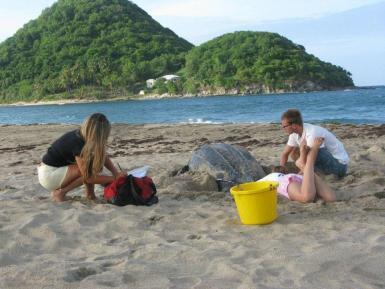 All of this could not have been achieved without the ongoing support of research assistants, volunteers and interns, who come from all over the world to help. They tag unmarked females, conduct nest excavations, and both organise and run the many educational and community programmes. The presence of nightly research patrols alone is enough to reduce the threat of egg poaching by more than 60%.

With the recent pandemic halting all arrivals of volunteers for the foreseeable future, we spoke to Kate Charles, Project Manager of Ocean Spirits, to hear how the team were coping.

“Since the nesting season had already begun, there was no time to plan, no time to apply for extra funding. It was too late to postpone volunteer bookings; the leatherback turtles were coming to Grenadian shores to nest, whether we were ready or not.

“The project launched its 2020 season in March – two newly recruited interns had flown in and were busy preparing the project house and research equipment. Just two days after they arrived, Grenada announced it was beginning to prepare to face the Covid-19 pandemic. Things began to move rapidly – within a week borders were to be closed, and the interns were sadly forced to fly home, not knowing how long the impacts of the pandemic would be felt.”

As tales abound of marine life returning to usually crowded waterways thanks to the global lockdown, Kate stresses that the closure of beaches in Grenada is not a beneficial thing for local turtle populations.

“We have found that it is not a good thing. The hatch success rates of leatherback nests are much lower than other sea turtle species – with less than 50% of eggs laid actually hatching – so it is vital that every egg is protected, and nests are not disturbed. […] With international volunteers no longer present to patrol, and no funding to pay local researchers, poaching increased from < 3% to 26% in the space of just two weeks. With the lockdown curfews being continually extended, more poachers are desperate for income.”

“St George’s University evacuated students back to the USA and Canada right at the beginning of lockdown. For us this meant the 150+ students who volunteer annually were gone. They usually provide a large presence on the beaches throughout the season and donate for the opportunity.”

Strict curfews and long wait times for permits to patrol the beaches also contributed to a sharp rise in egg poaching.

“The special permit request wait was long and for over a week we could not visit our nesting beach. Poaching began. We were granted 2 hours in the evening and 2 hours in the morning to check the beach – compared to our normal 10-hour patrol time. Poachers know we are not present all night and are operating as a much smaller team, resulting in their egg harvest increasing.”

For many of Ocean Spirit’s would-be 2020 volunteers, this season was their only chance to join the project; many are unable to reschedule for 2021 and are cancelling altogether. With volunteers out of the picture, the project cannot even rely on grants from other organisations, which have been put on hold for the foreseeable future, as funders remain unsure of their own financial security.

“It is hard at this point to know if we will be able to make it the end of the season,” says Kate; “staff have already taken voluntary pay cuts, but without income we cannot support local field workers or ourselves.” 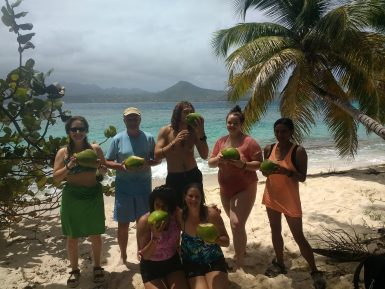 It is a troubling and isolating time for the team at Ocean Spirits.

“It will be a lonely year. One of my favourite parts in running Ocean Spirits is meeting all the volunteers; having people from such a variety of backgrounds come together, spending long nights on the beach chatting whilst we patrol for turtles… social nights playing games, day trips exploring around the island, and building friendships. I am looking forward to the day when we can all sit under the mango tree, sipping fresh coconut water and playing card games.”

While this sense of community is irreplaceable, donations to the project offer a lifeline of hope that these days will, in time, come again.

If you are able to join the project as a volunteer in 2021, then we would love to see your application! The volunteer project runs from March to August, and we have made volunteer dates available for the entire season next year. You can find more info via the project page and if you are ready to join already, you can fill in the online application form by clicking on APPLY NOW.