Situated in the Southeast Asian Malay Archipelago, Borneo is the world’s third largest island and divided between the states of Indonesia, Malaysia, and Brunei. Although the island makes up only 1% of the total global land area, its abundant tropical forests hold an estimated 6% of the global biodiversity.

Borneo experienced its highest rate of deforestation in the 1980’s and 90’s, but forest loss is still widespread. An estimated half of the world’s timber is still coming from Borneo, and the rainforest cover has dropped by over 30% in the past 40 years. One of the reasons for this rainforest loss is to clear the land to plant monoculture palm plantations – Malaysia and Indonesia combined produce around 84% of the world’s palm oil. These palm plantations have decimated and fragmented the rainforest, isolating patches of forest and separating wildlife populations into small island territories.

There is, however, hope for the wildlife in these areas – for potentially the first time, private palm land has been bought for restoration and protection. In Malaysian Borneo, the Rhino and Forest Fund (RFF) and the Borneo Orangutan Survival (BOS) group have collaborated and launched an initiative to replant forest over the land that was once a legally operating oil palm plantation. This 800m wide stretch of land will form a “forest corridor” between two protected areas: The Tabin and Kulamba nature reserves.

Both the Kulamba and Tabin nature reserves are almost entirely surrounded by oil palm plantations, with the only other free borders being mangrove swamps. This makes it almost impossible for many species to travel between one nature reserve and the other, isolating the populations. The Tabin Wildlife Reserve is one of the last areas in Borneo where nearly all the large indigenous animals (including the Bornean Rhino, Pygmy Elephant, Orangutan, Banteng and Sun Bear) are present, and habitat fragmentation threatens these already vulnerable populations. Reconnecting these nature reserves would be a huge step forward in supporting these and many other species, and in 2020 the RFF planted around 8,000 trees on 50 hectares of oil plantations.

Reforesting an area is no simple task, especially when you are trying to bring back a network as complicated as a rainforest where diversity is key. Seedlings are taken from the surrounding forest or raised in a nursery and are comprised of 32 different species from 14 families of tree. RFF have devised a planting design with a 50% limit for Dipterocarpacae (a family of trees that make up 80% of the lowland canopy), with the rest known to be beneficial for wildlife. The benefits vary from bearing essential fruit, to plants that enrich the nitrogen content of the soil or quickly provide a closed canopy. RFF are aiming for a higher concentration of the indigenous fruit trees in the replanted areas, thus enhancing the abundance of food to provide for a higher number of animals. The regeneration of the forest will be accelerated by careful
monitoring and clearing of creepers and grasses overgrowth and enriched by small water bodies and meadows that will specifically meet the needs of endangered species like the banteng, pygmy elephant, orangutan, helmeted hornbill, hair nosed otter and many more.

RFF have also launched a long-term scientific programme with the Leibniz Institute for Zoo and Wildlife Research (Leibniz-IZW) to work in tandem with this project, to gain evidence-based knowledge on the most efficient methods or reforestation, and how to return these degraded areas into reconstructed habitats. They are hoping that this research will yield a strong blueprint for how to successfully convert palm monoculture plantations that can be used across Borneo and beyond. This restoration project is a fantastic example of what can be achieved even in such damaged areas, and how nature can recover if we give it the space and support it needs. 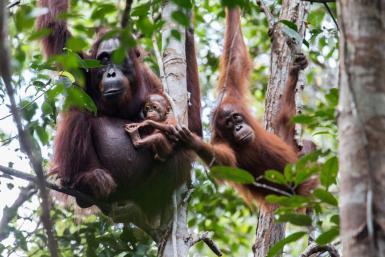 Another project that has been working in the threatened forest ecosystems of Borneo is our Orangutan Conservation Volunteer Project. The WorkingAbroad Borneo projects have has been operating for over two decades in the Sebangau and Rungan forests, providing a holistic approach to conservation in the largest unfragmented area of lowland forest remaining in Indonesian Borneo.

The Sebangau forest supports the largest known population of the Bornean orangutan and white-bearded gibbons, and the vast 580,000-hectare peat swamp is one of the largest terrestrial carbon stores in the world making it vital to learn about and protect this ecosystem. There are 2 different projects you can volunteer to take part in, each running for 3 weeks:

1) In the Forest Conservation Volunteer Programme, you will assist with various conservation and education projects such as mapping forest cover, replanting seedlings, teach local children about the importance of conservation, and determining primate density.

2) In the Forest Wildlife Research Volunteer expedition you will work alongside field scientists in their two primary fields of study: describing the biodiversity of the region, and to map the different habitat- types in the area. You will assist with orangutan nest counts and surveys, monitoring gibbon populations by triangulating the morning calls, forestry research, monitoring camera traps (with the hope of seeing elusive leopards and big cats!), and much more.