As the COVID-19 global pandemic continues to take human lives, the methods used in each country to protect the health of its citizens have also benefited wildlife and habitat. Unfortunately, there are also some unfortunate consequences for wildlife on the Costa Rica Osa Peninsula that are now coming into focus.

The COVID-19 shut down of Costa Rica also shut down tourism, leaving entire towns unemployed. With dwindling income for food and other essentials, even communities concerned about their surrounding natural resources are seeing their only options as hunting, gold panning, or logging. Sadly, this desperate and destructive activity is happening all over the Osa, and tragically, inside Corcovado National Park. There, Park authorities find themselves facing off with large groups of gold miners and hunters that are once again invading the park. Here’s the urgent challenge facing the next generation of sea turtles.

Sea turtles and their nests are easy prey for desperate people. Without tourism, the Pacific Sea Turtle Conservation project has lost the dozens of volunteers, who come each season to stand vigil with staff from the project to protect the nesting sites from predators, including human poachers.

“Our volunteers are the lifeblood of our program. They not only provide the workforce needed to protect the beaches, but their financial contributions help us pay the salaries of biologists. No one knows when our volunteers will be able to join us again, and so, our sea turtle populations are once again at considerable risk.” 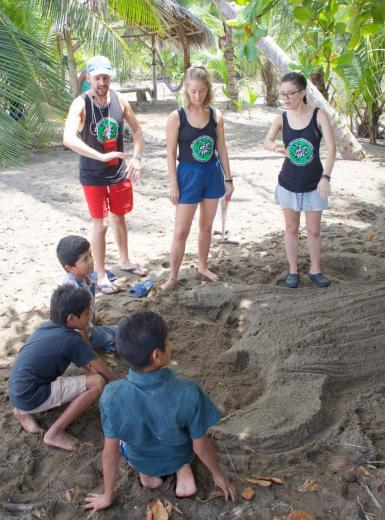 So, just as the project was making significant progress, saving thousands of baby turtles, educating people about their importance of how a sea turtle alive is much more valuable than a dead one, the virus set them back — financially and in the number of volunteers. Life is challenging enough for these tiny hatchlings, first being able to survive in their eggs, undisturbed beneath the sand long enough to hatch. Then, they have to run the gauntlet of jaws and beaks of the mammals and seabirds who stand between them and the water. Once in the ocean, they’re on their own to face a new wave of marine predators, among them, more humans. People will destroy them with chemical and waste pollution, fishing nets, and the plastics that wound, strangle and kill at every stage of their lives.

We understand that the economic times are hard everywhere, but we’re asking for any donation you can make to help the project hire residents of the Osa Peninsula to replace their volunteers for now and over the next few months. The project will pay them to build the new hatcheries, and help guard them against the dramatic increase in egg poaching and aggressive predators.

During the past 15 years, the project has had 986 volunteers from around the world, helping them with sea turtle protecting in the park. They have helped protect around 9,649 sea turtle nests. No less than 90,238 hatchlings have been released safely over these years, and an estimated 641,040 hatchlings were protected in-situ by the patrols on the beach.

Your support will help the Pacific Sea Turtle project give people a way to make even a little money, and lessen the need for them to depend on jungle meat and turtle eggs.

Written by Alejandra, from the Pacific Sea Turtle Conservation Project in Costa Rica

To make a donation to any of our project partners, please click here to donate under PayPal – and remember to write in your reference which project you would like the donation to be given to. It should be the project name so e.g. the Pacific Sea Turtle Project, Costa Rica.

If you are able to join the project as a volunteer later this year or in 2021, then even better! The volunteer project runs every year between July and January, and we have made volunteer dates available all the way till September 2021. You can find more info via the project page and if you are ready to join already, you can fill in the online application form by clicking on APPLY NOW.