The day starts “slow”, meaning that we have to be out of the house by 8am to go work in the office. We arrive at the office, a small but well-kept shack that doubles as a museum and information point for interested locals and enquiring tourists. It looks over the sea and has whale and dolphin bones displayed in front of it, perhaps the only office job I would happily accept, not to say the work isn’t hard, but more about that later.

Before hankering down for the day, Simon, Monique and I stroll through the port town which neighbours the office space. Simon knows all the locals seemingly well and stops at every venue and person to chat about conservation work, sightings and marine issues. I can see first hand that the project prides itself on being engaged with the community and it’s a warming thing to witness. Meanwhile, Monique tells me about some of the issues that the tour boats pose to the local wildlife. She points out two seals and two pelicans that are swarming a tour boat before departure and informs me that the tour guides have tamed these animals by making them dependant on them for food. That in itself may not seem to be a problem, after all it’s exactly what most people do with dogs, cats or hamsters, but the difference is that these animals are inherently wild. What that entails, especially in the case of the seals which are encouraged to dive onto the boat, so people can pet them, is that if one of these animals were ever to bite or otherwise injure a tourist, they would be euthanised instantly and no one would be liable except the animal. The difference between that and a house pet is that the owner of a house pet maintains, if not legally then ethically, a certain degree of liability for their pets’ actions. Thus, such animals are trained to fit into human society, whereas the seals and pelicans in this case are sold in tourism because of their wildness, which the tour companies cannot properly control. 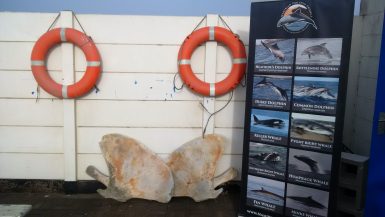 Anyway, after this interesting insight we head back to the office to start working. Today is a day of information. Simon gives a talk on the background, previous and current work, and aims of the Dolphin Research Project. Being the 11th year of the project and his project baby, it’s a pleasure to be taught about the project straight from the man who founded it. I will not go into detail about the whole talk because those more scientific aspects I’ll cover in an article which can be found on www.odyssea.lu. However, two things he said stood out to me, particularly as a scientific degenerate. Firstly, when discussing how he got to this point, he said “there is no consistency in science” referring to the struggle of receiving adequate funding for projects on a long-term basis. With most of these research fellows, PhD students and academics who decide to pursue their own projects and rely wholly on outside funding, it almost always comes in short-term waves, riddled with uncertainty. Simon explained that at least until you have reached a ten-year milestone with a project, funding is not guaranteed, and even then it can be fickle.

I realised I was actively meeting people who do something solely from a longing to do good and an avid interest in their field, with no incentive for money. It sounds extremely corny, but you can’t help but think how noble these people are. To add to that, the Dolphin Research Project and many others have a notable impact on government policy, animal conservation and human interference to the point where you can see change if you persevere and maintain your direction over years.

The second thing I found fascinating in Simon’s talk was more of a fact and something I think many people, including myself, overlook when they think about conservation. Because the Dolphin Research Project operates in a relatively small area on local populations of mainly Bottlenose dolphins, if local populations are declining for one reason or another, it has little effect on the global number of Bottlenose dolphins. What is often thought about amongst aspiring, but scientifically mislead, conservationists such as me, is the idea of saving certain species from extinction. A vital error in this way of thinking is that within a species, different populations have their own unique characterisations and behaviours, making them one of a kind and individual from the rest of the species. As a result, despite not being critically endangered worldwide, if the population of Bottlenose dolphins in Walvis Bay Namibia dies out, that is a unique and irreplaceable family of dolphins wiped out for good. The populations all act differently and are every bit as special as an entire species, something people should bare in mind when they think about conservation and what animals deserve some form of priority over others, if any.

After the talk, Darren and I were tasked with grasping the use of a camera which had a lens as long as my forearm. This was to prepare us to do photo identification of dolphins and whales at sea which we are doing tomorrow and many days after that. We got back to the house in the evening and spent until late that night preparing equipment for the next day at sea. By this time, tiredness had caught up with me and I was very ready to go to bed before my painful awakening at 5:45am the next morning.