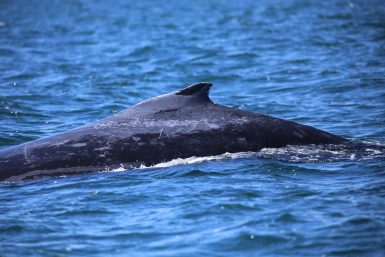 Today was another day at sea with a few more cetacean surprises, not all of them pretty. After the usual early morning humdrum and prep the team and I went out to investigate a previously beached Humpback whale which had died a while ago. We anchored at the beach and walked up to the carcass. The whale looked deflated and very dead, its body having sunk into the floor and its gigantic tongue hanging half way around its body and ending somewhere underneath the sand. This is another aspect of conservation people should remember when deciding whether to go down that path. A vital aspect of the work is collecting samples from stranded animals and cutting out jaw bones or other bits and bobs to be used in analysis and exhibitions.

After having seen two perfectly healthy and travelling Humpbacks the day before, seeing this mass of rotting death was a morbid contrast, but fantastically interesting. Simon, Monique and Darren showed me the various body parts that make up the whale and I could mentally recreate the image of this animal in all its glory, before its eyes were pecked out by seagulls. We decided to go back in the next few days to take further samples and salvage some of the animal. Back on the boat, we spot another stranded Humpback which had died more recently. It bobbed up and down in the shallows. Simon took a quick sample in the water because the boat could not approach properly in high tide. Another dead whale to inspect in the coming days. 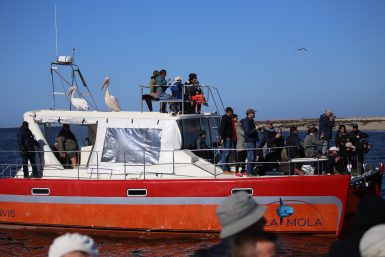 Further up the coast, a few tour boats carrying buckets of tourists started to bunch together, a sign that there were dolphins being sighted. We drove the boat towards the scene and briefly glanced some dorsal fins, before tour boat upon tour boat began to swarm the two dolphins that had been seen. The sight of around twelve boats full of ogling tourists racing after two dolphins was gut-wrenching and exceptionally aggravating to watch. One of the studies conducted in Walvis Bay using acoustic monitoring determined that Bottlenose dolphins become more excited around boats and rest less. Following the survey, once they are being harassed by more than four boats, they do not rest at all.

Having been told about this survey by Simon prior to witnessing all these boats harassing these two cetaceans, I was angered by the merciless attempts of the boat skippers to get as close as possible as fast as possible to the dolphins, who I can only imagine must have been distressed with all the noise and disturbance chasing them around. We decided to move on from this group, since we could not do proper work on them with all the tour boats around without becoming another part of the dolphins’ discomfort.

We jetted offshore towards the deep sea. Once again, a small but incredibly beautiful Humpback appeared, wading along in a manner that evoked no alarm. We tracked it for a while taking pictures from different perspectives. After this blissful bonding, we called it a day with the wind getting stronger and headed back to base. As we were driving home to write out our data, a call comes in to inform us that there have been sightings of dolphins in the lagoon right by the house. Simon and Monique drop Darren and I off to go photograph them from the shore. We waltz into the lagoon and watch a school of about five dolphins swim up and down the shore of the lagoon. Incredibly, they come so far in that standing at ankles depth in the water, the dolphins move past me no more than five metres away. Once the dolphins have left the lagoon and Darren and I have collected enough photographs to do photo analysis, we head back to the house. Data stuff and a wonderful evening round up the day.