Dissection day. After Darren and I once again paddled out on the kayak to reattach a cleaned and reprogrammed hydrophone, Morgan popped over and we made our way to Swakopmund to perform a necropsy on the Dwarf Sperm whale we found, scanned and froze eight days ago. The relevant party that was in charge of the freezing and defrosting had not taken the animal out for defrosting early enough, so the necropsy took place on a very cold and hard corpse. It was no task for the faint-hearted. Samples were taken from all parts of the animal and so it was cut into pieces on a metal table, mimicking a butcher’s workspace. The CT scan had revealed that the animal may have died of Brucellosis, a disease that essentially turns the animal’s brain to mush, which made me nervous, although it is easily treatable in humans. Once we started to get into the procedure however, I soon forgot that this was once a living animal and curiosity more than anything made me relax and relish the experience.

I had never seen the insides of an animal in such detail and it was the perfect opportunity to learn more about how cetaceans function. 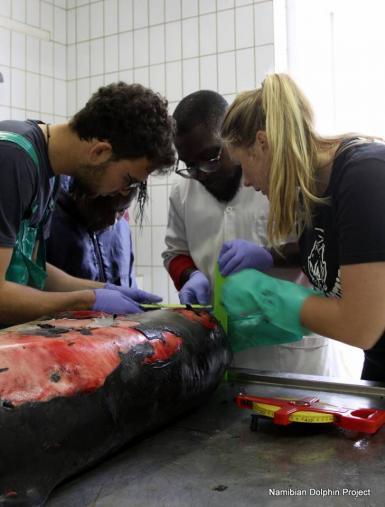 What impressed me the most were the “monkey lips” of the animal, located around the blowhole of the cetacean. The monkey lips are two valves (that look like monkey lips) that vibrate in the air current and generate noises in other tissue. They are used for echolocation and other communication sounds. Essentially these whales send out sounds in a ray from their foreheads.

What I liked less about the whole affair was examining the brain. I couldn’t help but be enthralled in the experience when I was sawing through the skull to get to the brain, but once there, I felt odd. Morgan poked and prodded the brain to see whether it was as the scan suggested, and it certainly seemed like the brain was liquefied and gooey. It was hard to tell on the spot since most of it was frozen, but it did not seem intact. There is something inherently strange about the brain. We eat most of the other organs of an animal and they are all explained and serve a specific purpose, but the brain is more mysterious and not fully understood, and seeing it resembling a bowl of porridge was unsettling. I can’t rightly explain what a strange feeling it was, but it felt like something weirdly instinctive not to want to mess with this organ.

I have been on the project for two weeks now. As before I keep learning on a daily basis. This week I was submerged in the dark side of science; dead animals, bad smells, dissections and decay have been regular guests. This is a part of conservation I was somewhat aware of before starting on the project, but it twists your stomach and morphs your mind a lot more when you are constantly surrounded by it. All the same, it has all seemed surreal and the morbid side does become diluted over time. It is constant exhilaration for those who have never been a part of such things and as I have mentioned before, if you can stay focused on what the work is for in the long run, it is extremely rewarding.