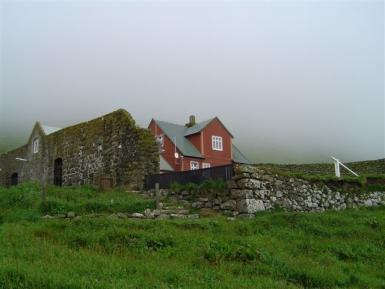 Halfway between Norway and Iceland, just 4 degrees south of the official boundary of the Arctic Circle lies an archipelago that few tourists ever visit.

The Faroe Islands, though small, are full of culture, history and stunning beauty.  As early as the 9th century Viking farmers settled here, looking for a new life and new opportunities.  They set up parliament soon afterwards, and to this day, Tinganes – a series of charming red wooden buildings in the capital’s downtown – is one of the oldest continually running parliaments in the world.

The Faroes are similar in climate and landscape to Iceland, but far less known.  They are not easy to reach, either: the only direct way to do so is either by taking a ferry from Norway or Iceland, or flying from only a handful of airports.  Making the effort is well-worth it, though.

While the Faroes may be a geographically isolated country (they are a self-governing territory of Denmark), they are thoroughly developed and technologically advanced.  An example to the rest of the world, over 50% of their energy is renewable.  By year 2030, the country is expected to run entirely on renewable energy. 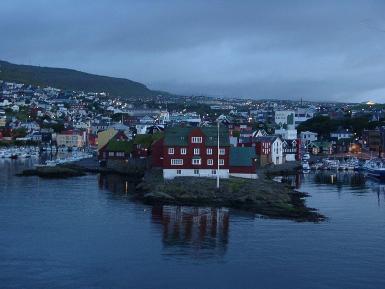 The modernism of the Faroes in no way conflicts with the rich traditions of the Faroese people.  Driving around the various islands that make up the Faroes, you will notice that most of the homes are made from wood and painted various colors – a sod green roof is a well-known trademark.  Sheep outnumber people here, and in fact sheep and not lawn mowers are used to keep the grass of the sod roofs nice and trim!

One point of controversy that has currently surfaced in this otherwise docile and laid-back country is the ongoing whale-hunting by the locals.  Some argue that whale hunting in the Faroes is aboriginal – dating back to the first settlers – and therefore should be protected as part of the culture.  Others argue that it is cruel and unnecessary.  One important point that’s all but moot is that whale meat, due to rising pollution in the ocean over the last several decades, has become dangerously high in mercury.  The good news is there are many other foods far more commonly available in the Faroes, so it should not be a serious issue for anyone wishing to partake in “heimablídni,” the Faroese hospitable way of life that includes sharing traditional meals with visitors.

Faroese, the language of the Faroese people, is thought to be the closest extant language to that of the ancient Vikings.  The Faroese people are proud of their language and have worked hard to preserve it in the modern era.  Most people you will meet in the Faroes speak at least three languages: Faroese, Danish and English.

The most logical place to begin a trip to the Faroes is in the capital, Torshavn (“Thor’s Home”).  At a population of 13,000, it’s easily the largest city in a country of only 50,000.  Here you can visit Tinganes, probably one of the world’s most charming and quaint-looking houses of parliament, before heading in almost any direction to any other part of the country.  Thanks to modern infrastructure, almost all the islands in the Faroes are connected by tunnels, whether above ground or under sea.

Possibly the most well-known site in the Faroes – Mulafossur Falls – is only a –minute journey west from Torshavn, on the island of Vagar.  The majestic falls are over 60 meters in height, pouring down alongside a dramatic cliffside.  The vivid icy blue of the surrounding ocean and lush green of the hillsides make for an unforgettable scene.

Further west of Vagar is the island of Mykines, the ultimate stop for any bird enthusiast.  In summer, Mykines abounds with puffins – a favorite among tourists.  Mykines is one of the few islands not connected by tunnel; it is a kingdom ruled by birds.  In order to get a glimpse of these avian sea-goers you will need to take a ferry or a helicopter.

One of the great pleasures in traveling the Faroes is not any one particular destination, but rather driving through small scenic villages filled with Lutheran churches and traditional sod-roofed homes.  Saksun and Bøur are just two examples of these type of small towns – be sure to get out and wander on your own.  For the more adventurous, there are hiking opportunities nearby, and almost anywhere you are you will be in view of the ocean.  In the village of Kvivik you will also have a chance to see the remains of a Viking-age farm.

The Faroe Islands is an exceptional example of a nation where tradition and modernism have combined harmoniously and the Faroese people are very warm and welcoming to visitors from around the world.  The time to go is now, while this gem of a place still remains somewhat off the radar.