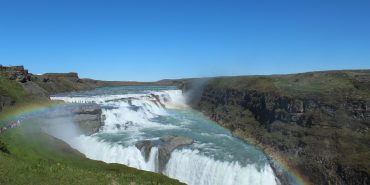 There is an island in the north of the Atlantic Ocean, where the North American and the Eurasian plates meet. Millions of years of volcanic eruptions and hundreds of layers of solidified lava brought the island into existence. The land of ice, mighty geysers, active volcanos, ancient glaciers, and majestic waterfalls. Its shores are either cut by fjords or covered in volcanic sands. You know its name, don’t you? That’s right, I am talking about Iceland.

Three years ago my friend and I, both thrilled to spend a week in Iceland, landed in Reykjavik. We first went for a walk through the capital, which is not that big, so we soon reached the coastline. Standing on the shore, looking at waves of the Atlantic Ocean crashing onto the beach just meters away from us, felt like a warm welcome and sparkled even more curiosity in us. We could not wait to see more of the island’s treasures in the coming days. 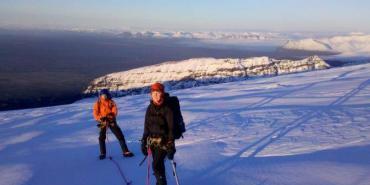 Walking through Þingvellir National Park, we, just like many other visitors, laughed at the fact that one of us can be still standing on North American plate while the other one will have her feet on the Eurasian one. The thought of casually strolling on the Mid-Atlantic Ridge would make us shiver with disbelief, realizing how surreal and grandiose it was. Just imagine zooming out into the outer space and seeing this lengthy ridge stretch from the north to the south in the Atlantic Ocean. It only comes up to the surface in its north and we were on that little surfaced spot called Iceland. Quite impressive, right?

Our next stop was the Haukadalur Valley which seemed to be a living, breathing being rather than a motionless landscape. When I saw Strokkur geyser sending a pillar of water high into the air, I thought about a whale coming to the ocean’s surface to take an inhale. Even though the smell of sulfur was not exactly pleasing, the valley impressed us with its colorful ground covered in crystalized minerals and its boiling pots of bubbling mud which turned out to be called fumaroles. Everything was fascinating us with its wild, raw beauty. 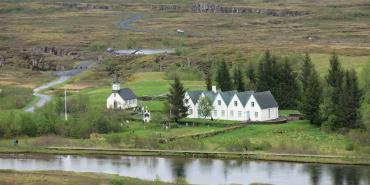 Driving farther into the mainland, the unearthly, otherworldly landscapes of Iceland made us feel like on a different planet or in the prehistoric times. Looking around, we would say: “that must be how Mars looks like” or “I will not be surprised if we see a flock of pterodactyls flying above this valley”.

Enchanted by the beauty of Iceland’s nature, we reached the mighty Gullfoss. We heard it before we saw it: imagine the sound of water rapidly making two plunges – one after the other – which makes it fly crashing down into a deep crevice. And then wait till you come closer to be blown away by the majesty of the view and the power of the waterfall that just flows and falls continuously with its monstrous speed – seems like nothing can stop it, yet it is hard to believe that all that water just keeps making its way to the ocean without ever stopping to take a break. 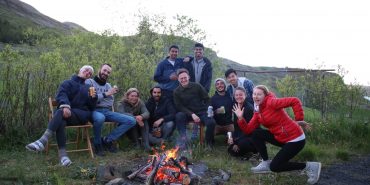 I could go on talking about the kindness of Icelandic people we met and their eagerness to show their country to excited travellers. I could tell you about seeing Northern Lights for the first time in my life or I could try to further describe the beauty of Icelandic nature that just never ceases to amaze. However, words might not make Iceland justice so, please, if you get a chance, go see for yourself. There is a great opportunity  Working Abroad offers to volunteers – you can not only let Iceland take your breath away but also help to preserve its nature. I don’t think there could be a better combination if you want to make a positive impact in the world while exploring this magical island in your free time.