Hauling themselves out of the ocean in the dead of night, female leatherbacks flock to Levera Beach on the northeast corner of Grenada to nest and lay their eggs. They begin by excavating a hole in the sand, which they then deposit around 80 eggs. She fills the nest with sand, purposefully leaving a large area of disturbed sand, making it harder for predators to find her eggs. When she’s done, she returns to the sea to start her journey back to her feeding grounds. Male leatherbacks do not return to land after they hatch, spending the rest of their lives at sea.

While each of the 6 other species of sea turtles boast hard shells, leatherbacks have an unmistakable inky blue carapace that is large and rubbery, with seven distinct ridges running along its length. Their unique shell helps them to absorb nitrogen, meaning they can dive deeper than any other turtle, stay under for up to 85 minutes, and not suffer from decompression problems when they resurface. Leatherbacks can weigh in at between 225-900kg (which is heavier than a female giraffe!) and can grow to average lengths of 7ftduring the 45 years then roam our oceans.

Why they are an important part of a healthy ocean ecosystem. 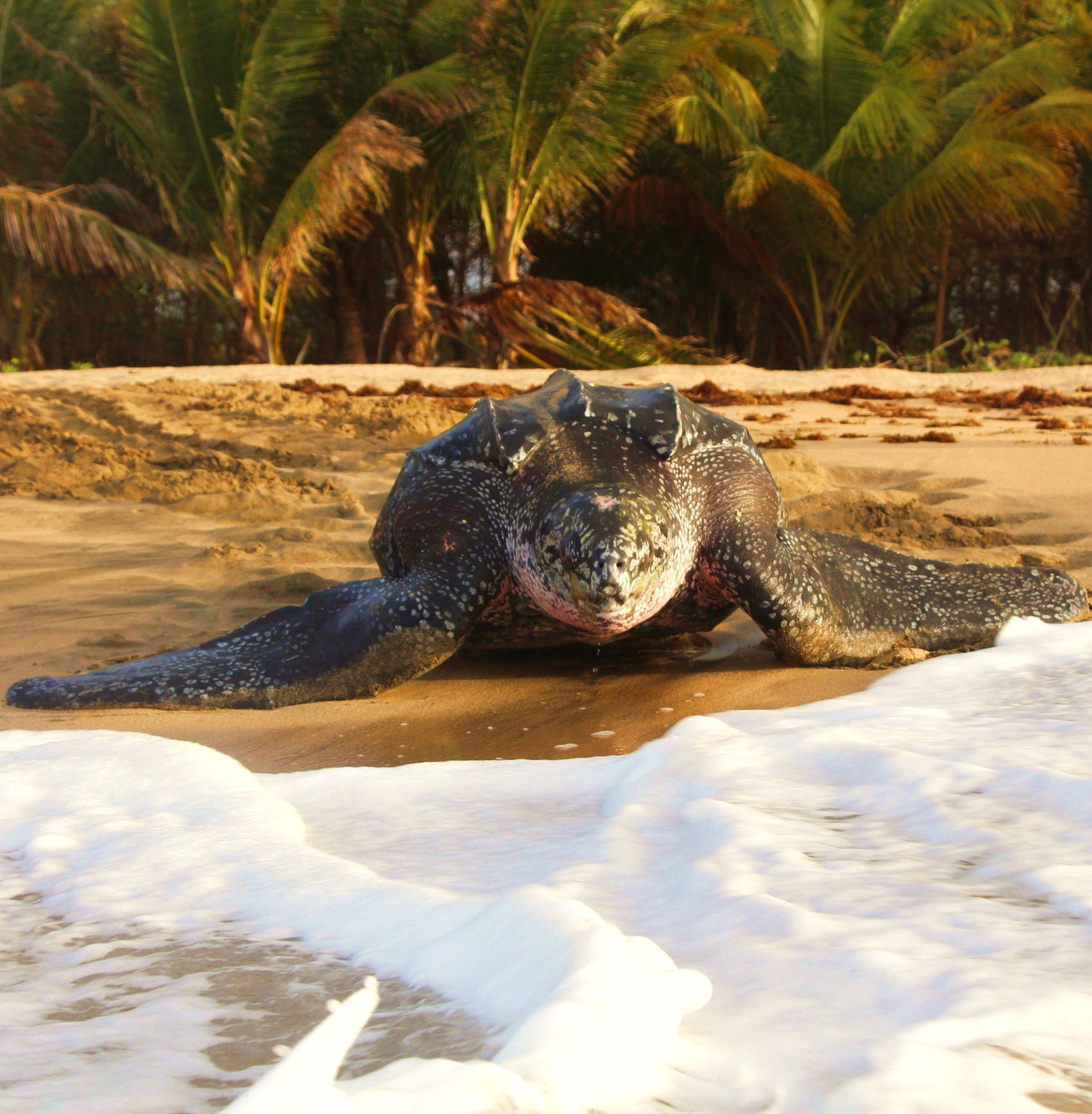 While they may not be apex predators, they are a crucial part of the ocean ecosystem, consuming on average 330kg of jellyfish each day. Jellyfish don’t require chewing as such, so their entire oesophageal tract is lined with sharp spines that point downward, preventing them from escaping and helping to shred it on the way to their stomach.

When female leatherbacks migrate to their nesting beaches, their egg-laying brings nutrients to potentially nutrient-poor beaches. Unhatched eggs are a source of food for other animals that dig them up, and while most of the hatchlings make it to the ocean, juveniles are a food source for various sea birds, fish, and a whole host of invertebrates. Any unhatched eggs and empty eggshells that remain under the sand have also been known to act as a fertilizer for beach vegetation.

Unfortunately, global warming is not the only challenge they face… 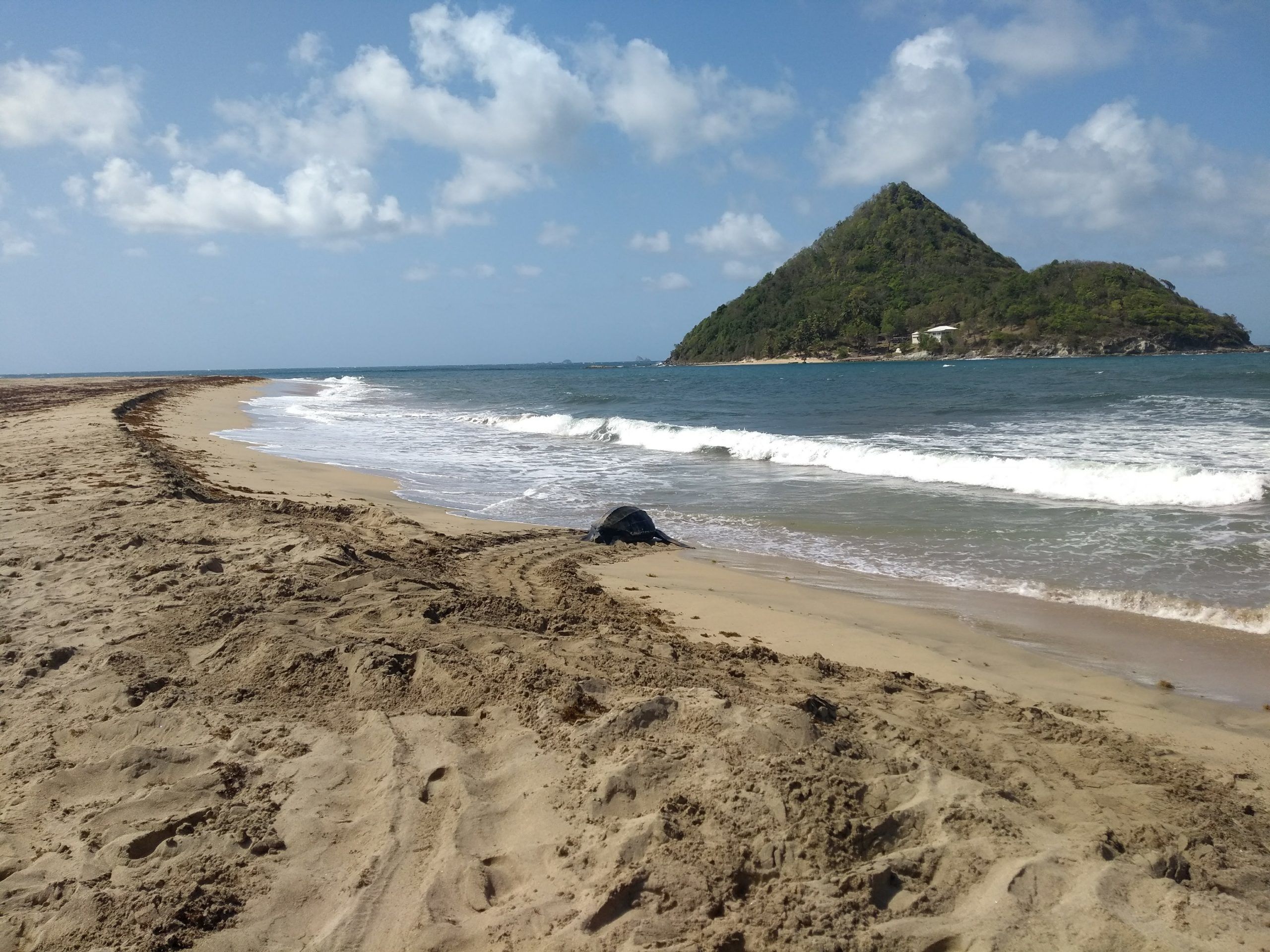 Although leatherback turtles have the widest global distribution of all the reptile species, these gentle giants are now categorised as vulnerable on the IUCN Red List. While their Atlantic Ocean populations increase, the Pacific Ocean populations are plummeting alarmingly quickly.

As well as mistaking the floating plastic for their favourite food, egg poaching (when eggs are taken from nests before they have a chance to hatch) has led to local extinctions in Malaysia and Nicaragua, while numbers have plummeted in Indonesia where adults are also killed for their meat.

Uncontrolled coastal developments affect nesting beaches, not only through destruction, but also from increased foot traffic, vehicular movement, pollution, removal of coastal vegetation increasing the risk of beach erosion, and runoff. Runoff is not only an aqueous substance but can be material depositions too. Finer sand deposits have been shown to impede gas exchange and increase mortality in leatherback nests in Australia.

If the finer sand is also darker in colour, this can cause nests to be warmer than they would be in the naturally occurring sand for that beach, affecting the sex ratios of hatchlings and even potentially reducing hatching success. Finer sand can also be more difficult for the hatchlings to dig through to emerge as it is more compact.

How can you help these gentle giants? 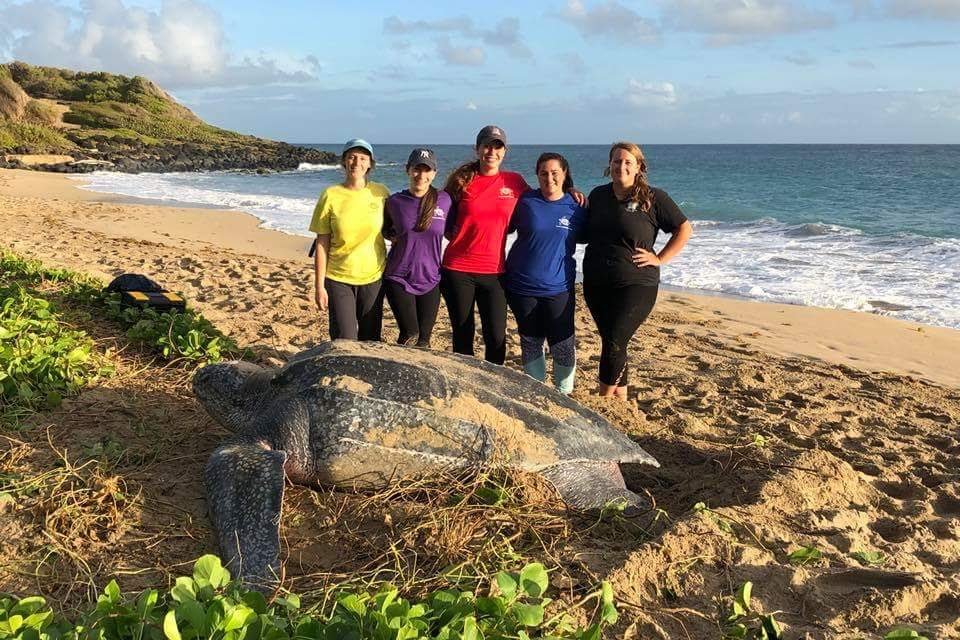 WorkingAbroad works closely with Ocean Spirits, a non-profit marine conservation organisation based in Grenada, who host a sea turtle volunteering project that can last from 2 weeks up to 3 months.

Grenada hosts a significant nesting population, with Levera Beach being the primary nesting site and location for the majority of work undertaken on this project. This beach is in the northeast of the island and sees 700-1,000 nests laid here each year. Be a part of the nightly research patrols, which not only collect important data about carapace measurements and eggs counts but also help to deter illegal poaching activities.

“Our volunteers’ presence on the nesting beaches has contributed to a 95% decrease in egg poaching over the last two decades making our nesting beach the third largest in the region for leatherback sea turtles.” – Project Manager.

You will also take part in flipper tagging, surveying adjacent beaches, and relocating any nests that are too close to the ocean or any other unsuitable conditions. A development directly behind Levera Beach can cause areas of the nesting beach to be covered in fine sediment and mud, which as mentioned can seriously impede survival rates.

This hands-on project is a great opportunity to get up close with the world’s largest sea turtle, directly contribute to research and conservation efforts, and experience the culture and jungles of Grenada. Leatherbacks undertake the longest migration between feeding and breeding areas, averaging at around 3,700 miles each way. You can help ensure that their long trip is the most successful it can be.