One of the most peculiar, winged creatures that roams the rural New Zealand forests, is the vibrant green and yellow feathered Kākāpō Parrot (pronounced car-car-pow). One of its own special kind, it is said to have absolutely no related biological features with any other species whatsoever, as well as being one of the plumpest and longest living birds, with a life expectancy of up to over 90 years. After evolving without the effect of mammals and predators, they grew so large that they lost their ability to fly and gained the ability to climb and run with their strong legs and claws. The origin of the word ‘Kākāpō’ derives originally from the Te Ao Māori term ‘Night Parrot’, with possible reference to the parrot’s nocturnal nature. This intriguing parrot is said to be one of the many taongas’ (treasures) connecting New Zealand natives to the natural environment as well as to their ancestral roots (whakapapa in Te Ao Maori) and is part of the connected abundance important for the sustenance of their ecosystem.

Birds, such as the Kākāpō, play a majorly important role in the functioning of their environments. From the pollination of plants, dispersing seeds, to spreading nutrients and keeping insect populations stable. Unfortunately, the Kākāpō haven’t had the most stable past couple hundreds of years themselves and are part of the eighty percent of New Zealand birds currently threatened or at risk of extinction, with Kākāpō populations decreasing themselves rapidly from the effects of human settlement and the arrival of predators. Conservation efforts
have now had to become one of the most important influences in the survival of the remaining population, of which began in 1894 with the work of New Zealand conservationist Richard Henry and the effort in which to relocate the birds. 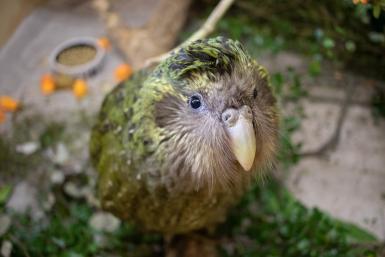 The dedicated conservation work of today has evolved over the past hundred years into something worthy of deep appreciation. Currently governed by the Kākāpō Recovery Plan, with overall goals to secure, restore and maintain the population through various means, such as optimising fertility and various genetic management programmes. Conservationists have helped raise numbers from a mere 51 to over 200 birds using a variety of technological equipment, such as tracking and monitoring bird activities and diet, as well as carefully methodical breeding programmes.

One of the most infamous of the Kākāpō, is that of the name Sirocco. Media adoration for Sirocco flooded in after the 2009 BBC documentary ‘Last Chance to See’ with both British actor Stephen Fry and zoologist Mark Carwardine, where quite intriguingly Sirocco may have mistaken Mark Carwardine’s head as something worthy to mate with. The popularity of Sirocco spiralled him into a life of superstardom, with currently over two hundred thousand Facebook followers, he was also crowned as New Zealand’s Spokesbird for conservation in 2010.

Awareness and utilising modern technologies and media has drastically affected the way in which conservation is achieved today. Kākāpō conservation is proof of the benefits that social media and education can change the attitudes towards the natural world and allow people to
feel connected and wonderous when they examine every single animal. The recent 2020 exhibition from the Natural History Museum in London, ‘Fantastic Beasts; The Wonder of Nature’, perfectly attracts you to look at animals with a very different viewpoint. The exhibition is almost hinting that the fantasy animals we adore in movies and books are just as magical as the real animals on Earth that we take for granted and overlook. The exhibition itself includes a section on Kākāpō conservation from the Kakapo Recovery Programme, educating museum visitors and raising awareness for just about how special these birds really are.

Though the history of the Kākāpō population may be a turbulent and unstable series of events, it can offer a peek into an optimistic future of reparation for endangered animals. As technology and education advances, so does the ways in which creative awareness can communicate to people all over the world. In 2020, the Kākāpō victoriously won New Zealand’s bird of the year, the competition of which received the most votes in 2020 than of any other previous years. Therefore, proving the innate intrigue that people have into the natural world and the growing concern for the much-needed protection of our global environments.

If you are interested yourself in supporting the natural world and the conservation of the rich New Zealand forests and native wildlife, as well as learning more about the culture and history of the Islands; then click here to view the conservation volunteering and internship projects currently available with WorkingAbroad.

Photos: “Kākāpō” by kimberley_collins is licensed under CC BY 2.0