Cousin island is a sanctuary for all marine lovers. For me, I fell in love with turtle all over again. I grew up in a small coastal town named Darwin, on Australia’s North coast. There my parents established an ecotourism business called Sea Darwin, with the niche being Flatback Turtle tours on a remote island in the Arafura sea. I had been exposed to the nesting behaviours of these Flatbacks for nearly 10 years, and that’s where my interest in sea turtles started. In August 2018, I left tropical Darwin and headed for Europe. There I spent three months before the winter set in. That’s when I decided I needed to defrost, and given my love for sea turtles, I researched turtle conservation in Mauritius. Mauritius because my mother always spoke of it, she had never been but it sounded interesting to her. The Seychelles Island Conservation project was one of the Google results, specifically the program that they had on for the month of November. I read about the Hawksbill Turtle work that they did on Cousin Island and now, I’m meant to be back home in Australia but have found myself returning to Cousin for the next chapter of my adventure. 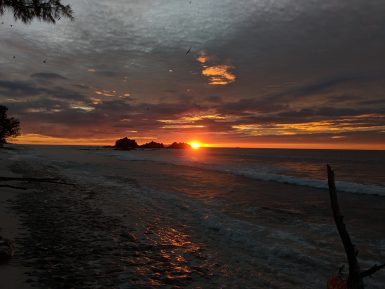 Over the course of the month I noticed a change in my view of sea turtles. Though I loved them before, my month on Cousin made me much more passionate and attached to these creatures. Given these girls are nesting every two weeks for the season, you begin to recognise turtles by their features – and it was special knowing that I had been with the same turtles a few weeks earlier. I remember vividly in my first week I was at the busiest nesting site on the island, named Vacoa. It was 6pm, I had just watched the sunset and I had a Hawksbill digging her egg chamber. I remember watching her lay and with every contraction her two rear flippers lifted about 10 cm from the sand. At first I thought it was cute, which it was, but then I wondered if this was normal for Hawksbills. I now know that, no, it’s not – she must have been special. That same turtle came back two weeks later, and as soon as the contractions started, I knew it was her!

In hindsight there’s something about living on the island that motivates you to do good. I’m not going to lie, it is challenging at times. During peak turtle season you might get the early 6am shift and then will work throughout the day until the last girl lays. Often you get the late starters that choose to dig their nest at sundown. And yes, it is special to witness this with pastel colours in the background, but soon after dark the mosquitoes ambush you and the struggle to remain cool calm and collected whilst measuring, tagging (if required) and marking the nest sets in. I was lucky enough to be with a team of people that did not complain and carried on happily. It can be hard to wake up in the mornings, but once you’re with turtle it’s all worth it. The 6am shifts were my favourite, because that’s the coolest time of the day, there are no mosquitoes, and you have the beach all to yourself.

I would be inconsiderate to discuss sea turtles without mentioning the obvious. Cousin attracts passionate employees and volunteers to come and lend a helping hand to research and conserve wildlife, yet humans are the reason that we do this in the first place. One aspect the program highlights is marine debris collection. It’s expected (and morally sound) that marine debris are collected from the beach, sorted and disposed of appropriately at the end of each month. Unfortunately, even such a pristine part of the world such as the Seychelles continues to collect plastics on the beaches on a daily basis. Mainly polystyrene, bottle tops, lighters and thongs (flip-flops for non-Australians). And even though people don’t like to see rubbish on beaches – as mentioned by multiple tourists – I think it’s something that we as humans need to take responsibility for, as we’re creating a world that animals cannot function in. 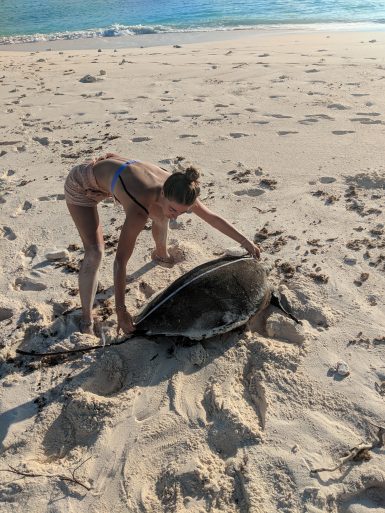 So in my opinion, the program provides a great first insight into sea turtle conservation. It communicates the importance of tagging, measuring, clutch counting, and excavations in determining nesting patterns and Hawksbill populations. Of course, there are so many aspects of the program that I have not mentioned. The days aren’t just about turtle conservation, you also have the monthly or annual census for other species such as the seabirds and tortoises, beach profiling, Seychelles Magpie Robin monitoring, home duties and many more. Yes, the program is busy, but there is abundant time to do other things you love. Thankfully I had a great group with Marie, Kai and Emma. Spare time was spent snorkeling, swimming and other cheeky antics.

So to conclude, I would recommend for anyone to visit Cousin, and if you’re motivated then volunteer there for a month. The bonds you make with the animals is something you would never anticipate. I found myself getting protective of these Hawksbills. I think after watching so many turtles lay you understand what a stressful time it is for them, but also the amount of effort they put in every nest. From emerging up the beach, digging the egg chamber, laying between 60-250 eggs and then covering the nest, these mother’s are some of the toughest in the ocean.

For anyone who is thinking about volunteering with sea turtles, do it, because I think that it takes close encounters with these creatures to realise how special they are. Come to Cousin, be with turtle, fall in love with turtle, and let that influence the way you live your life. Be considerate, don’t litter, don’t exploit, and don’t be invasive of these creatures – let’s appreciate what wildlife we have left, but make efforts to conserve it along the way.

If you are interested in joining the Seychelles Island Conservation Volunteer project on Cousin Island, then check out the project page linked to above.