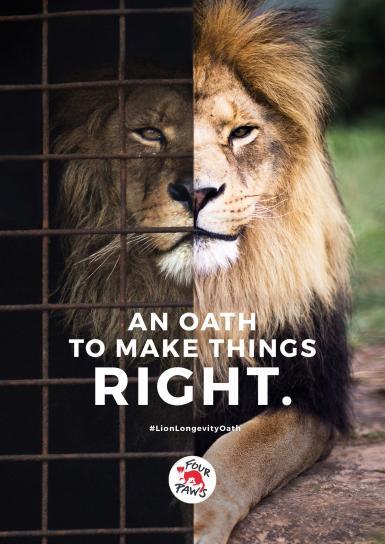 At WorkingAbroad, we take a hard stance against the exploitation and mistreatment of animals. We are proud to be partners with a  multitude of organisations that are fighting to end harmful animal practices. This is why we have now also partnered with the internationally recognised Four Paws organisation by signing the Lion Longevity Oath.

We only ever offer projects that are of a 100% ethical nature. This means no petting, no riding and no ‘walking with beasts’. We do not work with any organisation that is in any way operating outside of our ethos. Many of our volunteer projects work with Big Cat conservation in Africa. Unfortunately, a large number of organisations who claim to offer sanctuary to these endangered creatures are not what they claim to me. Lions are continually bred in captivity for the purposes of cub petting which drives the tourist industry. Once male lions are considered too old for petting or breeding, they are tragically used in the canned hunting industry; their bones sold off for a lot of money which also encourages poachers. Female lions are forced to breed, over and over again, enabling the ever-growing pockets of this industry.

Four Paws Africa set up the Lion Longevity Oath campaign as a way to raise awareness around the immense animal welfare issues that lions are facing in the continent. Four Paws’ director, Fiona Miles, states: “There are about 3,000 wild lions living in national parks and reserves in South Africa, but between 8,000 and 12,000 lions living in captivity…” This is a deeply concerning problem that must be challenged.

The best way to tackle this issue, is to end the industry that is causing it. By signing the oath, the public can show their support and vow to never get involved in this industry in the future. The hope is that together we can shut it down.

Please share the message in any way you feel is suitable. You can read more about our ethical stance here. Or, you can get in touch via our contact page here if you would like to find out more about this campaign or any of our other partners.

Four Paws’ vision is simple: “a world where people treat animals with respect, empathy and understanding. “They offer themselves as the voice for animals who are solely under human care. Their campaigns fight to end the mistreatment of encaptured and captivity bred animals; their international lobbying aims to implement fair and just laws for the wildlife and their research enables them to educate people towards a better, co-existent future.