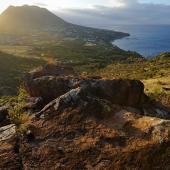 Volunteer in the Dutch Caribbean on the stunning island of St. Eustatius, and join the St. Eustatius National Parks Foundation and help to protect and conserve their National and Marine Parks. You will have the opportunity spend time doing various conservation volunteer projects across the parks, as listed below.

The Quill and Boven National Parks

Volunteers spend two or three days a week working on the trail systems in The Quill and Boven National Parks. You will work mostly on trail maintenance including clearance, erosion control and improving signage. It is important that you are a competent hiker and are fit and healthy. A number of our trails are steep with loose footing.

The aims of the Botanical Garden are preservation, conservation, education and recreation. The Garden has basic facilities and a public pavilion for picnicking and barbeques. It has suffered damage from the recent hurricanes, drought, destruction by roaming animals and a lack of funding over the years therefore there is much need for development. A decision was made by the STENAPA board in 2017 to focus on Phase 1 of the garden which are the lower slopes and entrance area. Funding has been made available for a perimeter fence to keep out roaming animals. The shade house was completely destroyed by Hurricane Irma. Rebuilding this has become a main project in the garden. The Botanical Garden is open to the general public from sunrise to sunset 365 days per year and we offer guided tours with a small suggested donation. The Botanical Garden Ranger or the Botanical Garden intern will carry out these tours.

We have regular iguana patrols to catch and bead the local endangered population of Lesser Antillean Iguana. This includes search and removes patrols of invasive Green Iguana and any hybrids. A member of staff who is trained specifically in catching and beading iguanas will accompany volunteers on iguana patrols. Iguana patrols take place at specific times during the day when the iguana is most active and in the evening between 7pm and 9pm. Alongside iguana patrols, STENAPA is setting up a head-starting facility where we will be monitoring and caring for juvenile wild iguanas that will be released in adulthood. Volunteers will help with maintenance and feeding schedules at this facility.

STENAPA run a junior rangers club in association with other after school clubs on the island. This involves doing a range of activities with the children from hiking to snorkelling. The first week of every month STENAPA visit all the schools on the island giving short presentations about nature on Statia and doing some activities. This can also involve going on field trips. In July there is a summer club which is a week of activities for children in the summer holidays. Alongside this STENAPA run a week-long event called Shark Week in June which is aimed at educating the community of the importance of sharks on our reefs – this is a Caribbean-wide initiative and is very popular. For volunteers, there is an opportunity to help out with the activities with the children if you are interested.

St. Eustatius, better known as Statia, is located in the Netherlands Antilles islands of the Caribbean, and is only 8 km long and 3 km wide. It is a tranquil and beautiful island which gives a visitor the feeling of stepping back in the Caribbean of decades past – islanders enjoy striking up conversations, stray goats and chickens wander around the streets and the pace is calm and slow.

The Quill National Park was pronounced the first official National Park of the Dutch Caribbean on May 4th, 1998. The area is now a protected area, which consists of the dormant volcano, The Quill, and the limestone formation to the south of it, called White Wall. Within the National Park, there are several good hiking trails for visitors – you will be working on these trails. The Boven sub-sector comprises five hills in the Northern Hills of St Eustatius: the Boven, Venus, Gilboa Hill, Signal Hill and Bergje. This area has only been actively managed since 2007 due to a long-running land ownership dispute.

The Statia National Marine Park is defined as the waters surrounding Statia from the high water mark to the 30m (100ft) depth contour. It was designated the Statia Marine Park in 1996 through the St. Eustatius Marine Environment Ordinance, with the objective to preserve and manage Statia’s marine resources for the benefit and enjoyment of the people and future generations. STENAPA also manages the Botanical Garden which is located in on the windward side of the island, at the base of the Quill National Park with a view of St. Kitts.

You will be living in a volunteer house in a quiet part of the island. The volunteer house has 3 bedrooms with bunk beds and 3 bathrooms. It is situated on Rosemary Lane, a 10-minute walk from the main office, main town areas and the Oranje Bay area. The house has views of the Caribbean sea, a small garden and outside sitting area. The house has basic facilities including WIFI, kitchen and washing machine. It is communal living and there may be up to 10 people sharing the accommodation at any time.

You will be responsible for preparing all of your own food. Food is not included in the project fee and so you should aim to budget for your food at least $350 per month, which you can use to buy your supplies at the local grocery store. There is also a local farmer called Hazel’s Vegetables who sells his produce near the airport- ask a member of staff to show you where. There are also a few restaurants on the island you can visit. Volunteers also sometimes pool their funds to buy food together and also prepare communal meals in the house kitchen.

You can join the project starting on any Monday throughout the year, as long as you are able to come for 8 or 12 weeks. In some circumstances, we are also able to accept volunteers for a shorter time period depending on availability.