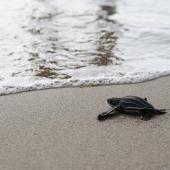 Volunteer in the Dutch Caribbean on the stunning island of St. Eustatius, and join the St. Eustatius National Parks Foundation and help to protect and conserve their National and Marine Parks. You will have the opportunity to spend time doing various conservation volunteer projects across the parks.

During the turtle nesting season which runs from March to October, you may be assisting with night patrols on Zeelandia beach monitoring nesting sea turtles (not applicable from November to March). Teams will be established and days rotated. You will assist with gathering data from sea turtles that generally nest between dark and dawn. Data gathered by the crew will be shared Caribbean-wide through a linked database which wildlife managers use to improve protective measures for endangered species. In general, you will be monitoring hawksbill, green and leatherback turtles. This programme may also be combined with beach sand monitoring. Turtles don’t nest every night and therefore you shouldn’t expect to see turtles during every patrol. At the beginning of the season, it is rare to see any turtles nesting. Please also note that our nesting population of turtles is small and we, therefore, do not patrol the beach every night throughout the season.

At the beginning of the project, you will receive an orientation of the various equipment and areas of work and the general protocol of being a volunteer. In the first week, you will be shown the location of the national parks, the botanic garden and the office. The rangers will ensure that you are fully orientated on all equipment and understand the tasks at hand.

During your free time, you also have the opportunity to get SCUBA certified (at your own cost) and spend some time diving in some of the Marine Park’s designated sites. In your afternoons, if you wish, you can also help out in the Marine Park if you are SCUBA certified – this can include mooring maintenance, dive site checks and patrols, snorkel club etc. – see marine park volunteer on the right cleaning down a line.

You will work 5 days a week. A typical working day for trail work or botanical garden duties would start at 7 am and finish at noon. The afternoons will be free and can be spent relaxing, diving, snorkelling, swimming down at the pier, obtaining diving certificates, bird watching, using the Internet, and enjoying the peace of Statia! For the sea turtle volunteer programme, you will be required to do a night patrol a few times a week. These start at 8.30 and continue until the small hours of the night depending on the advice from the Marine Park Manager and the Sea Turtle Intern. You are also welcome to volunteer for more than half a day if you wish, as any extra help is always welcomed!

The sea turtle conservation programme has now been running for over 17 years. Monitoring patrols for nesting turtles on Zeelandia Beach started in 2002, and increased in 2003 with a greater number of patrols due to the onset of the Working Abroad Volunteer programme. It was with great excitement that the first leatherback turtle was observed nesting on 17th April 2003, and a number of additional leatherbacks nested on Zeelandia during the year.

Today, the Sea Turtle Volunteer Programme Co-ordinator along with the Project Intern coordinates the monitoring patrols during the nesting season. Volunteers are expected to take part in these patrols when they are scheduled. Volunteers should also expect that many nights the beach will be patrolled without a sighting of a nesting female. Our presence on the beach should actually be seen as safeguarding. Our role is the protection of the eggs until the hatchlings make it safely to the surf.

Patrols sometimes take place in inclement weather and are only cancelled if there is a thunderstorm present. Rest stops take place at the end of each walk so besides getting sleepy, patrols are not very tiring at all. Volunteers make the sea turtle programme possible as STENAPA does not have the amount of staff in order to carry out the necessary patrols.

St. Eustatius, better known as Statia, is located in the Netherlands Antilles islands of the Caribbean and is only 8 km long and 3 km wide. It is a tranquil and beautiful island which gives a visitor the feeling of stepping back in the Caribbean of decades past – islanders enjoy striking up conversations, stray goats and chickens wander around the streets and the pace is calm and slow.

Visitors don’t go to Statia for its beaches, but rather for its amazing diving and snorkelling opportunities as well as for its hiking trails in the National Parks, and for visiting its old Dutch colonial buildings and forts. Statia has a population of approximately 3200 people, most are of mixed African and European descent. Dutch is the official language, but the spoken language is English.

You will be living in a volunteer house in a quiet part of the island. The volunteer house has 3 bedrooms with bunk beds and 3 bathrooms. It is situated on Rosemary Lane, a 10-minute walk from the main office, main town areas and the Oranje Bay area. The house has views of the Caribbean sea, a small garden and outside sitting area. The house has basic facilities including WIFI, kitchen and washing machine. It is communal living and there may be up to 10 people sharing the accommodation at any time.

You will be responsible for preparing all of your own food. Food is not included in the project fee and so you should aim to budget for your food at least $350 per month, which you can use to buy your supplies at the local grocery store. There is also a local farmer called Hazel’s Vegetables who sells his produce near the airport- ask a member of staff to show you where. There are also a few restaurants on the island you can visit. Volunteers also sometimes pool their funds to buy food together and also prepare communal meals in the house kitchen.

You can join the project starting on any Monday throughout the year, as long as you are able to come for 8 or 12 weeks, however turtle conservation activities will only run during the nesting season of March to October. In some circumstances, we are also able to accept volunteers for a shorter time period depending on availability.