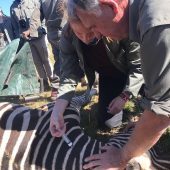 We are offering the opportunity for students to gain work experience required to become a vet. These days most universities will only consider your application if you have had several weeks of experience, and you will be expected to gain more experience whilst studying.

This programme offers veterinary work experience for whether you are applying for the first time, or looking to expand your portfolio. Our courses are carefully designed for vet studies criteria whilst giving you the chance to work on the award-winning Shamwari Game Reserve. The courses give students hands-on experience in the best ways to treat African wildlife. Students work alongside our experienced specialists on Shamwari Game Reserve and with a world-renowned wildlife Vet, Dr Johan Joubert. This Vet experience is ideal for individuals already studying or qualified and Pre-vet for individuals in the process or interested in applying for vet school.

Shamwari Game Reserve is situated in the Eastern Cape of South Africa, only an hour’s drive from Port Elizabeth. This area historically had an abundance of wild game roaming free with one of the richest wildlife areas on the African continent. The Eastern Cape is famous for a number of other game reserves. The great herds of Knysna Forest elephants were almost totally eradicated at the turn of this century and in 1931 there were only 11 elephants remaining. Miraculously, the man most responsible for nearly wiping out an entire species had a dramatic change of heart and spent the remainder of life fighting for a safe haven to conserve these rare and wonderful animals. Addo National Park and the Mountain Zebra Park saw almost exactly the same thing happen to the rare mountain zebra. Shot to the brink of extinction, in the 1930s this rare species struggled to come back.

Today, there are over 200 in the park. On 15th October 1992, Shamwari was officially opened, and an Animal Rescue and Educational program was launched, in partnership with the Born Free Foundation to home rescued big cats from captivity. Over time Shamwari grew and established itself and by the year 2000, the Reserve was large enough and stocked sufficiently to support large predators. A dedicated and systematic re-introduction program was launched and finally in October 2000, the first lions were brought back to the Eastern Cape and released at Shamwari to fulfil a dream.

Today over 5000 game range freely, having been bred and/or re-introduced into Shamwari, now a Game Reserve stretching over 25000 ha.

Conservation volunteers live in any one of our three varying accommodation facilities which have dining and common and/or lounge areas, and most of the time, you will be hosted in an area locally known as Madolos, which is on the wildlife breeding area of the Shamwari Wildlife and Conservation department, but is predator-free allowing for total freedom for volunteers. General game including zebra, kudu and waterbuck can be found along with buffalo on the adjoining property. Shared rooms with twin beds or three beds (if in tented accommodation). Plunge pool, DVD facilities, Internet access (you have to buy WIFI vouchers) with shared computer for volunteers, outdoor boma and fireplace available at Madolos. Although any room or facility changes are averted, participants may be moved during their stay.

Three meals are provided on a daily basis. Meals will either be served at the facility itself or taken as a pre-packed serving, depending on planned or as result of unscheduled activities. Vegetarians and other dietary requirements can be catered for, if notified in advance. Cooked breakfasts are served once weekly – generally Fridays. Meals are prepared with exposing participants to an array of local dishes in mind and are generally taken on a self-service basis with the option of juice, tea or coffee. Still and spring bottled water is available for purchase from local trading stores.

Volunteers can join year-round for 2 weeks in duration.