Did you know that Peru is one of the 17 mega-diverse countries on earth? The country holds more than 20,375 species of flora, 523 mammals, 1847 birds, 624 amphibians, 2145 species of fish, and 4000 species of butterflies. The vast majority can be experienced in the Amazon rainforest. This include several primate species such as Howler monkeys, Capuchins and Spider monkeys, anteaters, tapir, giant river otters, peccary, macaws and the rare Harpy Eagle. Numerous snake and frog species, as well as cat species such as the jaguar, puma and ocelot

Puerto Maldonado is in the south-eastern part of Peru.  It is the entry point to the Amazon rainforest in the Madre de Dios region – close to the border of Bolivia and Brazil.  It is also the provincial capital of Madre de Dios.  A region recognised by the Peruvian Congress as the Biodiversity Capital of Peru.  Madre de Dios borders the Cusco region and consist almost entirely of lowland Amazon rainforest.  It contains the largest percentage of endemic plants and animals in the world. 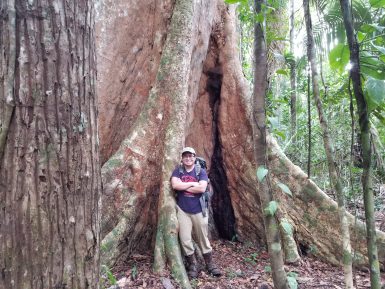 Rainforests are incredibly important parts of our ecosystems.  The Amazon is no exception.  That is why the conservation work in the region is so necessary. The project is located within the Las Piedras district, in Tampopata.  The Las Piedras river – known as the ‘river of stone’ – runs through the reserve.  It is the longest tributary of the Madre de Dios River.

Many threats continue to endanger the Peruvian rainforest and its wildlife.  This includes timber extraction, gold-mining and unsustainable farming practices.  As well as oil and gas prospecting, land speculation, and poorly-regulated tourism development.

The dry season is from April to October. For the more tropical locations such as Puerto Maldonado and the Amazon rainforest, this comes with hot and humid temperatures usually reaching 30 degrees on average. It is a good time of year to visit the jungle. As it comes with fewer mosquitoes and lower rivers exposing the beaches. Thus it is easier to witness animals at close range and see various species nesting.

Did you know that during the dry season (June/July), you can experience the ‘El Friaje’ weather phenomenon even in the rainforest? Making the temperatures drop all the way to 10-15 degrees Celsius during the day. This is due to the cold fronts from the South Atlantic.

From November to March is the rainy season. This means still hot and humid weather, but heavy rains at any time. This is in particular during December and January. These usually only lasts for a few hours at a time. However, it can cause roads and jungle trails to become flooded.

You can read more about Peru, its history, geography and sights on our country page here. You can also check out what it’s like to be a conservation volunteer in the Amazon in the videos below!