"I had a great time and learnt a lot"

Sarah Vaughan-Roberts, from the UK

I had a great time and learnt a lot.  It was such a shame about the weather, but I had a really good week of getting out in the boat every day and also a great weekend travelling round the south of the island.  Thank you all so much for a great week in Mauritius. I learnt such a lot and feel very motivated to spread the word about your great work and all the projects you are running. Good luck with all the important work you are doing. All the best to you all and thank you for making me feel so welcome.

Sarah Eustace, from the UK, volunteered for 3 weeks in July

I had an incredible experience volunteering, and really learnt to appreciate how they aim to protect the marine environment. As I study Marine Biology, working here for three weeks really gave me the hands-on experience I have been so excited to get into. I am really passionate about working with turtles and corals, and here, from day one we were taught the importance of protecting this unique environment.

The locals were really friendly, and this really added to my experience. I made loads of friends that I still talk to from all around the world. It was my first time travelling alone but arriving at the house on the first night really put me at ease, as I was introduced to everyone staying in the house and to a few members of staff and knew I would fit in straight away.

I would definitely return for longer as I enjoyed my stay so much and really felt like a made an impact, as did all the other volunteers that I worked with. I would recommend this trip to any one who is passionate about the environment and who wants to contribute. Mauritius is a beautiful place with so much to see and has a really laid-back way of life. Can’t wait to go back!

Read about Sarah’s whole experience from her time volunteering in our field blog here. 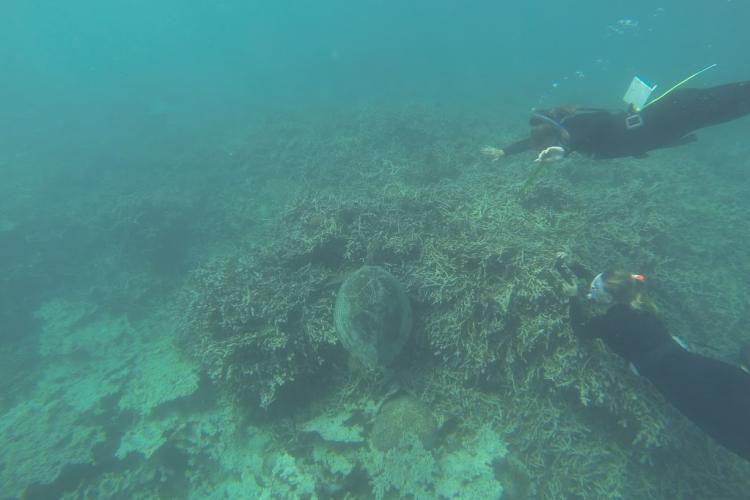 "I had a very rewarding experience at Blue Lagoon"

Gaëtane Mourlon, from Belgium, joined for 2 weeks in May

I had a very rewarding experience at Blue Lagoon.  The staff is very nice and friendly. They are very knowledgeable and always happy to share the knowledge.  They are committed. I felt comfortable talking to them if I needed to and they are willing to listen. They also make sure we are fine and safe. The skipper follows the safety rules on the boat so we felt safe and he also knows a lot about marine conservation. I really liked the fact that the staff is from Mauritius.

Work is very interesting and tasks are diverse. We are supervised by interns and/or staff who explain the work and give us advice and tips. We feel useful. It is a motivating environment. You depend on weather or seasons so not always easy to do the job (strong sea current, rain).  The volunteer house is very nice and comfortable. And very convenient that the office is in the house so we get to see the staff every working day.  An activity is organized on Fridays for volunteers which is fantastic. The turtle intern Kate and our coordinator Hannah were great and it was a pleasure to hang out with them. Very lovely persons!

"Loved the coral farming and I made some close friends"

India Roberts, from the UK

My recent time was great. Loved the coral farming and I made some close friends whilst being away, most of which I am still in contact with now . I am looking to come back in the latter half of this year also. It is such a great project and would highly recommend it to anyone thinking about it 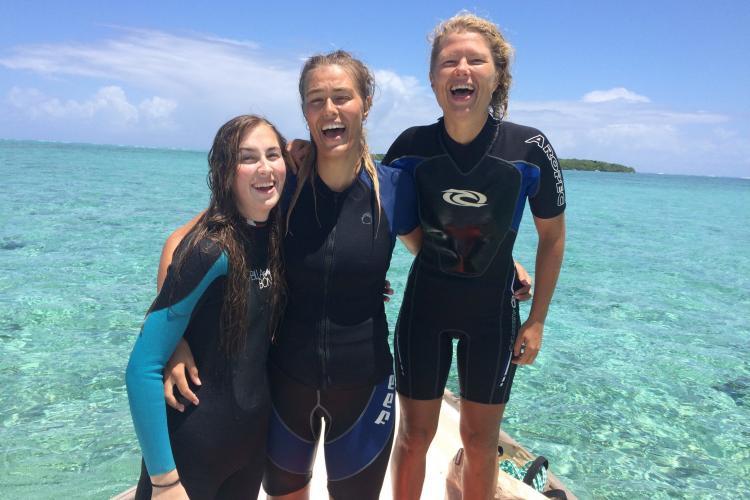 "I really enjoyed my time volunteering in Mauritius"

I really enjoyed my time volunteering in Mauritius, with some of the highlights being turtle monitoring and lagoon monitoring. Overall, I found the project interesting and incredibly relevant. It was also a great opportunity to meet other volunteers and to get to know the friendly interns.

"It was amazing to have this kind of experience"

My time volunteering was amazing! I had a great experience with amazing people. I learnt a lot of things about the different species in the sea, like fish, coral, turtles, and I got to know a lot of different parts of the island with the volunteering day. The organization, the interns and volunteers were really good, and all the staff was really nice with us. I shared a really good time with all the people I met there. The house was nice and confortable, very near of all needs, but it needed a little more space in the kitchen to keep all our food.

It was amazing to have this kind of experience in my life and I’ll do more volunteering for sure. 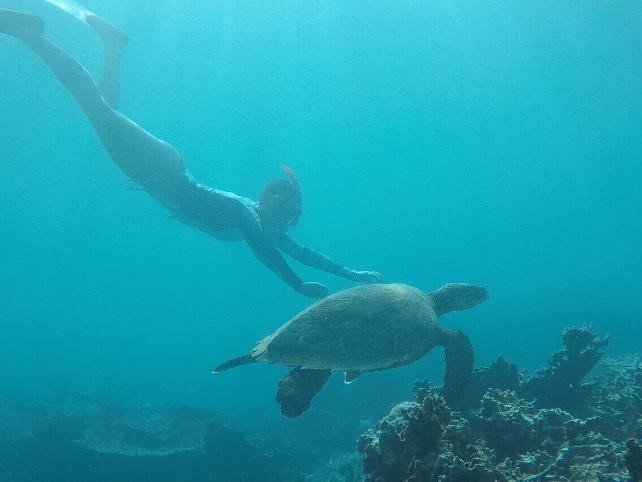 "I had an absolutely amazing experience"

Jack Digman, from the UK

I cannot fault my two weeks in Mauritius, I had an absolutely amazing experience and it was most definitely the best experience of my life so far. I could not point out one seriously bad thing about my entire time on the trip! The staff, volunteers and interns were all lovely, with the interns being especially helpful when it came to finding out where I needed to be and what amenities were around me in the local area. There wasn’t a great deal of interaction between myself and the head staff, however I enjoyed my time spent with boat captain Sydney and part time worker Vasisht, with Sydney even willing to take us snorkelling on his days out!  I cant wait to earn enough money to be able to return there one day!

"The project team were very welcoming and enthusiastic"

Overall, I enjoyed the 3 months that I spent in Mauritius. It’s very different to anywhere else I’ve been before. The project team were very welcoming and enthusiastic about the work that they were doing. I originally went as an intern to work on their coral farming project, however as this was delayed due to local legal proceedings, I ended up working on their new turtle monitoring project as the “scientific lead”. I am also now writing the paper that the project will be able to publish as the first piece of scientific literature on turtles in Mauritius since 1980. 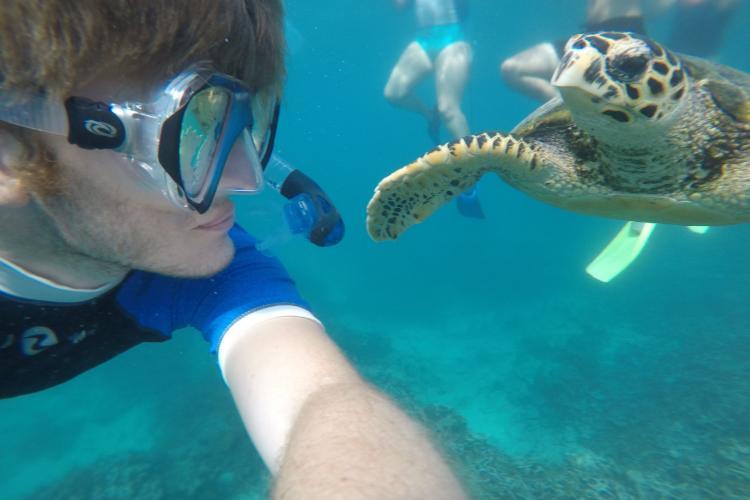 "Had a great time collecting data, going snorkelling and kayaking, exploring the island"

I had the best six weeks volunteering in Mauritius. The other volunteers, interns and coordinators were very nice and I felt welcomed as soon as I arrived. Together we had a great time collecting data, going snorkelling and kayaking, exploring the island and giving presentations. The apartment was very good and we had a lot of nice evenings cooking together and sitting on the balcony. All in all I had a wonderful time and could share a lot of great memories with great people. I would do it again any time.

"I’ll definitely be going back one day"

Richard England from the UK

I had a best time in Mauritius! I loved working at the Blue Lagoon Reef Monitoring project with the team and have made some great friends in the rest of the volunteers/interns as well. The accommodation is very good, especially having everyone together in one building and having access to bikes to get around. The work is very laid back; It’s a shame they are not actively doing turtle nesting monitoring anymore, but one of the other volunteers and Josheena were lucky enough to go to an island north of Mauritius where they knew a nest was about to hatch. Having one day a week scheduled for excursions to various places around the rest of the Mauritius was great and enabled me to feel like I’ve seen the entire island in its glory. I’ll definitely be going back one day.

"Mauritius’s coral reefs are a jewel in the worlds ocean"

Alex Hormann from the USA

I personally have been all over the world, and visited many different waters and coral reefs. Therefore, I feel safe saying that Mauritius’s coral reefs are a jewel in the worlds ocean, offering one of the most pristine, and diverse coral reef systems I have ever seen. I have also seen the rapid rate in which this country is developing, its economy expanding and its people growing in number.  As with many other nations around the world, development of a country goes hand in hand with environmental degradation. In many Latin American countries and in Asian countries, the price of development has been the destruction of their natural treasures, their reefs, their national inheritance. As these countries and populations grew, cheap food and decorations became more important than future generations, and their reefs were raped of all life and resources leaving only a shadow of its prior beauty and productivity. This is what I see happening right now in Mauritius, although it has just started.

While the reefs are still here and they are still beautiful, they will not be for long if nothing is done to save them. People may see this as robbing them of their human rights for food and money, but it is merely preserving these resources so that their kids, and future generations can also reap the bounties of the healthy ocean. If one has any foresight whatsoever, and can see past their own greed, then one can see that the production of their oceans is in a great decline, and by continuing to harvest it at such a rate will rob it from the future generations.
The magnificent reefs that circle this island are some of the most beautiful in the world, and should be considered part of the national identity of every Mauritian, a reason to be proud of your beautiful country. This is why I think the coral reefs are worth investing in, and worth protecting.

I have spent 2 weeks volunteering – an absolutely great time, during which I have learnt a lot about the marine ecosystem and coral reefs, gained insight into the work of an environmental NGO and discovered the beautiful island of Mauritius. It has been an extremely valuable and memorable experience, which has allowed me to perfectly combine a volunteering activity with holidays. As a matter of fact, the programme relies on a good mix between work and free time. The staff is very friendly and knowledgeable, which makes you feel at ease from the start. I was also lucky to be in a great group of volunteers with whom we spent a lot of pleasant time together beyond the project activities. Last but not least, the support offered by WorkingAbroad in the preparation of the trip is really great; you can be sure that all your queries will be addressed in a very effective and quick manner.