About the Statia Conservation Project 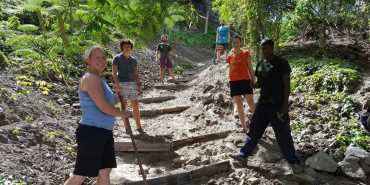 Volunteer in the Dutch Caribbean on the stunning island of St. Eustatius, and join the St. Eustatius National Parks Foundation and help to protect and conserve their National and Marine Parks. You will have the opportunity spend time doing various conservation volunteer projects across the parks, as listed below.

The Quill and Boven National Parks

Volunteers spend two or three days a week working on the trail systems in The Quill and Boven National Parks. You will work mostly on trail maintenance including clearance, erosion control and improving signage. It is important that you are a competent hiker and are fit and healthy. A number of our trails are steep with loose footing. 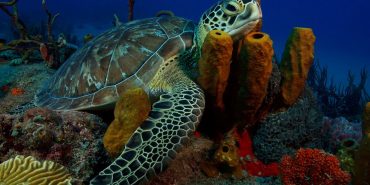 During the turtle nesting season which runs from March to October, you may be assisting with night patrols on Zeelandia beach monitoring nesting sea turtles (not applicable from November to March). Teams will be established and days rotated. You will assist with gathering data from sea turtles that generally nest between dark and dawn. Data gathered by the crew will be shared Caribbean-wide through a linked database which wildlife managers use to improve protective measures for endangered species.  In general, you will be monitoring hawksbill, green and leatherback turtles. This programme may also be combined with beach sand monitoring. Turtles don’t nest every night and therefore you shouldn’t expect to see turtles during every patrol. At the beginning of the season it is rare to see any turtles nesting. Please also note that our nesting population of turtles is small and we therefore do not patrol the beach every night throughout the season. 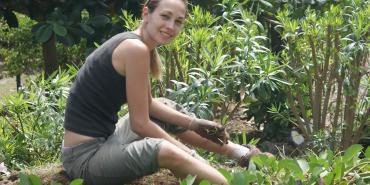 The aims of the Botanical Garden are preservation, conservation, education and recreation. The Garden has basic facilities and a public pavilion for picnicking and barbeques. It has suffered damage from the recent hurricanes, drought, destruction by roaming animals and a lack of funding over the years therefore there is much need for development. A decision was made by the STENAPA board in 2017 to focus on Phase 1 of the garden which are the lower slopes and entrance area. Funding has been made available for a perimeter fence to keep out roaming animals. The shade house was completely destroyed by Hurricane Irma. Rebuilding this has become a main project in the garden. The Botanical Garden is open to the general public from sunrise to sunset 365 days per year and we offer guided tours with a small suggested donation. The Botanical Garden Ranger or the Botanical Garden intern will carry out these tours.

We have regular iguana patrols to catch and bead the local endangered population of Lesser Antillean Iguana. This includes search and remove patrols of invasive Green Iguana and any hybrids. A member of staff who is trained specifically in catching and beading iguanas will accompany volunteers on iguana patrols. Iguana patrols take place at specific times during the day when the iguana is most active and in the evening between 7pm and 9pm. Alongside iguana patrols STENAPA are setting up a headstarting facility where we will be monitoring and caring for juvenile wild iguanas that will be released in adulthood. Volunteers will help with maintenance and feeding schedules at this facility.

STENAPA run a junior rangers club in association with other after school clubs on the island. This involves doing a range of activities with the children from hiking to snorkelling. The first week of every month STENAPA visit all the schools on the island giving short presentations about nature on Statia and doing some activities. This can also involve going on field trips. In July there is a summer club which is a week of activities for children in the summer holidays. Alongside this STENAPA run a week long event called Shark Week in June which is aimed at educating the community of the importance of sharks on our reefs – this is a Caribbean-wide initiative and is very popular. For volunteers there is an opportunity to help out with the activities with the children if you are interested.

In the office STENAPA has a small team which require help from time to time. Tasks may include organizing meetings, data entries, manning the reception desk and office support for rangers. This is a good opportunity to understand the management of protected areas and its protocols.

Fridays are known as ‘Family Friday’ and are an opportunity for the whole group to work together with interns on a particular project, such as marking out a new trail, installing new signposts, cleaning the turtle nesting beach, planting a new garden or carrying out a survey.

At the beginning of the project, you will receive orientation of the various equipment and areas of work, and the general protocol of being a volunteer. In the first week you will be shown the location of the national parks, the botanic garden and the office. The rangers will ensure that you are fully orientated on all equipment and understand the tasks at hand.

During your free time, you also have the opportunity to get SCUBA certified (at your own cost) and spend some time diving in some of the Marine Park’s designated sites. In your afternoons, if you wish, you can also help out in the Marine Park if you are SCUBA certified – this can include mooring maintenance, dive site checks and patrols, snorkel club etc. – see marine park volunteer on the right cleaning down a line.

You will work 5 days a week. A typical working day for trail work or botanical garden duties would start at 7 am and finish at noon. The afternoons will be free and can be spent relaxing, diving, snorkelling, swimming down at the pier, obtaining diving certificates, bird watching, using the Internet, and enjoying the peace of Statia! For the sea turtle volunteer programme, you will be required to do a night patrol a few times a week. These start at 8.30 and continue until the small hours of the night depending on the advice from the Marine Park Manager and the Sea Turtle Intern. You are also welcome to volunteer for more than half a day if you wish, as any extra help is always welcomed! 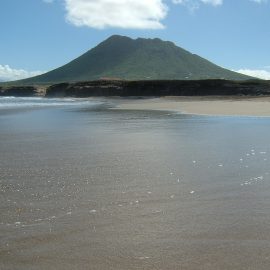 The Quill National Park was pronounced the first official National Park of the Dutch Caribbean on May 4th, 1998. The area is now a protected area, which consists of the dormant volcano, The Quill, and the limestone formation to the south of it, called White Wall. Within the National Park, there are several good hiking trails for visitors – you will be working on these trails. The Boven sub-sector comprises five hills in the Northern Hills of St Eustatius: the Boven, Venus, Gilboa Hill, Signal Hill and Bergje. This area has only been actively managed since 2007 due to a long-running land ownership dispute.

The Statia National Marine Park is defined as the waters surrounding Statia from the high water mark to the 30m (100ft) depth contour. It was designated the Statia Marine Park in 1996 through the St. Eustatius Marine Environment Ordinance, with the objective to preserve and manage Statia’s marine resources for the benefit and enjoyment of the people and future generations. STENAPA also manages the Botanical Garden which is located in on the windward side of the island, at the base of the Quill National Park with a view of St. Kitts.

The Quill, a 600-metre inactive volcano that dominates the landscape of the island of St. Eustatius, is home to many unusual and endangered species of plants and animals.  The Quill is characterised by eight different vegetation zones, six of which are found on the crater rim and basin, including the Elfin Forest, the dry evergreen forest, evergreen bushland, each of which contains rich flora.  The crater basin is dominated by giant Kapok and Sandbox trees, as well mango, wild papaya and mamee apple which share the canopy with endangered tree species, including Redwood Birds Cherry.  Eighteen species of orchid are found in the Quill and on the Northern hills.  In addition, many species of birds, some of them threatened live in the Quill, including Tropicbirds, Caribs and hummingbirds.  Several species of reptiles, which are already extinct on other Caribbean islands can be found, including the Red-Bellied Racer Snake and Antillean Iguana.

An ethic of environmental conservation has yet to take hold on Statia, you can help with the progress that is being made. Providing access to the island’s natural attractions, especially to the young, aids in the development of ecological consciousness on which the lasting survival of the Sint Eustatius National Parks ultimately depends

The sea turtle conservation programme has now been running for over 17 years. Monitoring patrols for nesting turtles on Zeelandia Beach started in 2002, and increased in 2003 with a greater number of patrols due to the onset of the Working Abroad Volunteer programme. It was with great excitement that the first leatherback turtle was observed nesting on 17th April 2003, and a number of additional leatherbacks nested on Zeelandia during the year.

Today, the Sea Turtle Volunteer Programme Co-ordinator along with the Project Intern coordinates the monitoring patrols during the nesting season. Volunteers are expected to take part in these patrols when they are scheduled. Volunteers should also expect that many nights the beach will be patrolled without a sighting of a nesting female. Our presence on the beach should actually be seen as safe-guarding. Our role is the protection of the eggs until the hatchlings make it safely to the surf.

Patrols sometimes take place in inclement weather and are only cancelled if there is a thunderstorm present. Rest stops take place at the end of each walk so besides getting sleepy, patrols are not very tiring at all. Volunteers make the sea turtle programme possible as STENAPA does not have the amount of staff in order to carry out the necessary patrols.