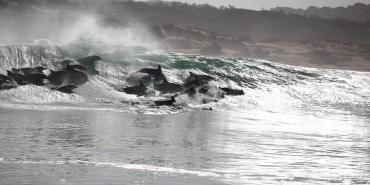 Located in South West Africa, bordering on South Africa, Botswana, Angola and Zambia, Namibia is a land of contrasts. Home to the oldest desert in the world and one of the most productive areas in the world’s oceans. Namibia has over 1500km of coastline, but the country’s marine resources tend to be overshadowed by the vast beauty of the desert and the wildlife of Etosha National Park.  Namibia is one of the worlds least densely populated countries, yet despite some of the worlds richest mineral deposits (especially uranium and diamonds), unemployment is high and much poverty remains creating challenges for the country.

Conservation is a national priority and Namibia has some of the largest and most well known national parks in the region, but there are regular and increasing conflicts with the mining industry with its ability to create jobs and wealth. In previous years, there have been major finds of hydrocarbons as marine phosphate gravels, both the exploration for and exploitation of these resources can have potentially large impacts on the marine environment.

Life as an Intern!

Watch this video to learn about the work that interns are doing at the Dolphin Research project in Walvis Bay in Namibia and find out what research is taking place.