"I had a great time on the project."

Catharina Rebling, from Germany, spent 2 weeks on the project in August

I had a great time on the project. It was really nice to see whales and dolphins in their natural habitat.

"I had a fantastic week being on the project!"

Benedicte Johansen, from Norway, joined the project for a week in August

I had a fantastic week being on the project! The staff was friendly, the boat and food good and the sights were amazing! I really enjoyed my time there, already miss the crew and can’t think of anything “bad” to critique. I learned a bit more about dolphins and whales and life on a boat. Thank you for letting me join in on this wonderful experience.

Shane Smith, from New Zealand, volunteered for 1 week in May

We had an amazing experience. The team was really knowledgeable and passionate, and over the week we saw many, many beautiful whales and dolphins. The overnight experience in the middle of the med was a real highlight. Highly recommended.

A group of Students from Lewes Old Grammar School in the UK. Feedback from Geography teacher Abbi Nagamootoo

Students stepped out of the classroom and onto a boat recently, as they sailed across the Mediterranean Sea in search of marine life. Year 9 pupils were enlisted to help four cetacean researchers at the port of Sanremo, Italy, where they helped to collect valuable data about whales and dolphins in the Mediterranean region while living on a 72-foot research sailing boat.

Over the course of the trip, students and those of us teachers accompanying them, saw more than one hundred striped dolphins, a loggerhead sea turtle, two sperm whales, and two fin whales. We also spotted bottle-nosed dolphins, only the fourth sighting of the pod for the entire season. The most incredible discovery came later: we saw one sperm whale called Erico twice in the course of the week – which was incredible considering he hadn’t been seen by researchers in the entire Mediterranean Sea for more than a decade! Best of all, though, was when we came across another sperm whale. We soon realised he had never been seen before and had the unique privilege of naming him Lewis, in honour of our school.

Students were put through their paces as amateur sailors on the expedition, and tasked with cooking, cleaning and maintenance duties, while also spending one-hour shifts each day working with a marine biologist on the sighting platform. Pupils had the chance to jump from the boat into the water to swim and snorkel in the middle of the ocean. This trip was really about offering students something different. After we went to Costa Rica last year, we wanted to give Year 9 students a similar chance to do conservation work in an inspiring setting. The expedition gave them an insight into marine life which they could never have experienced had they just studied it within a Sussex classroom. It was quite literally a chance to expand their horizons by sailing into the vast expanse of the ocean and we are so grateful to the research institute for being a visionary organisation.

The trip marked LOGS’s third collaboration with WorkingAbroad, which has worked with the institute for almost a decade to send volunteers to the Dolphin and Whale Project in Italy to research the ecology, behaviour, feeding habits and conservation of cetacean species living in the Mediterranean.

Vicky Kornevall-McNeil, co-founder of WorkingAbroad, said: “The feedback from students has been wonderful. This experience will stay with them for the rest of their lives – nothing beats the excitement of being on the top, looking out, and suddenly sighting a sperm whale, and we’re delighted to now offer this trip each year to LOGS to help inspire and reconnect them with nature.” 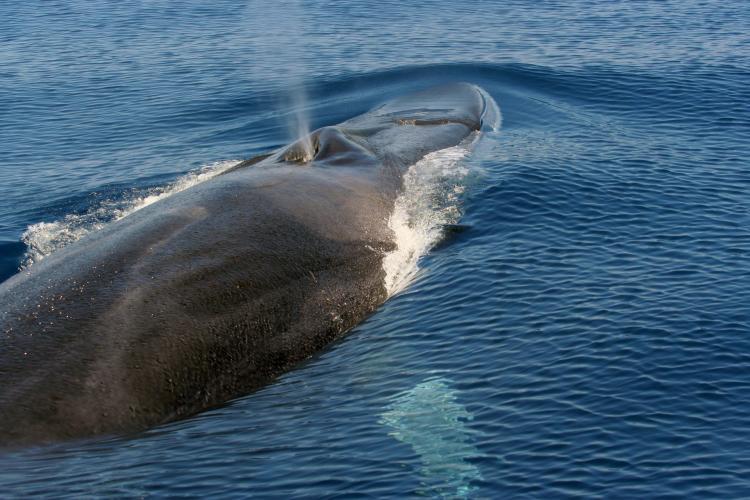 "I found the trip to be a wonderful experience"

I had a fabulous time on the Pelagos, and while I wasn’t at first wholly clear what the purpose of the research was, the researchers were very kind and more than willing to talk in more depth about all the surveying and data collection we were doing. I can’t speak for some of the other people on board, but as a student interested in biology, I found the trip to be a wonderful experience, and would certainly be very glad to go again.

"My first sighting of a Fin Whale was truly amazing. I was ecstatic!"

Victoria Golding, a Marine Science student from the UK

Meeting the team was great, everyone was so welcoming and had a lively and pleasant attitude. The boat was a lot larger than I had imagined, with wooden décor and the glimmer of paintings of great big blue beasts on the walls. The harbour was large, with even larger boats and extravagant yachts neatly parked in their berths awaiting the next morning’s sunrise.

I’d say the third day was my favourite. We examined the Sea long and hard that day. The sea conditions were OK. Three people were on watch constantly throughout the day to search for any blows from a whale nearby or the glimpse of a dolphin breaching from the water. One person searched on the left side of the vessel, the second on the right and then one of the crew members spanning the entire horizon. Each team was on duty for one hour and then swapped with another group. It got really hot up there, in constant exposure to the fiery sun and hats only got you so far. I’d say my favourite view on the boat was sitting on the bow of the boat, only seeing the tip of the nose of the vessel dip up and down into the oncoming waves, with splashes of seawater either side of me as the waves crashed over the gunwale. The only thing between myself was the stretch of blue to the horizon and the Sun. Just as I was about to start my one-hour shift on watch duty, a blow was spotted! I climbed to the top of the boat and within 5 minutes I saw the blow of my first sighting of a Fin Whale. It was truly amazing. I was ecstatic!

The rest of the week was spent with more trips out searching. On our last day we came across another Fin Whale, a Sunfish, jellyfish and many experts in flying – seabirds. We also had other lectures during the week covering how to identify certain marine mammals, what their behaviours are like in social groups, the 25 years’ worth of research summary and the work that the project has achieved and where the research is heading to in the future.

This was an invaluable experience and I not only learned so much about cetaceans and the work that is carried out in order to help the preservation of the conservation of these animals, but I also learned a lot about myself and where I would like to expand my skills as a scientist. So much work and dedication has gone into this project by the head scientists and employers of the organisation who make it all happen and it was an honour to be a part of journey.

One thing which has stuck with me since this experience is the beauty that is right on our doorstep, free to everyone to experience and enjoy. It pains me to see the ocean being polluted with plastics and garbage from our carelessness and disrespect for the environment. It was spectacular seeing these creatures in their natural environment, however the time I spent snorkelling in the evening I could only fear at what might happen to these creatures when I came across numerous amounts of plastic waste in the oceans. To say the least, I did not only see this at the shallow beach coasts, but also out at sea, too many miles far from our garbage bins! The project has done a fantastic job in protecting these cetaceans’ home, studies have shown increases in the whale and dolphin populations – it’s amazing. They have inspired me to help the oceans in my own way. 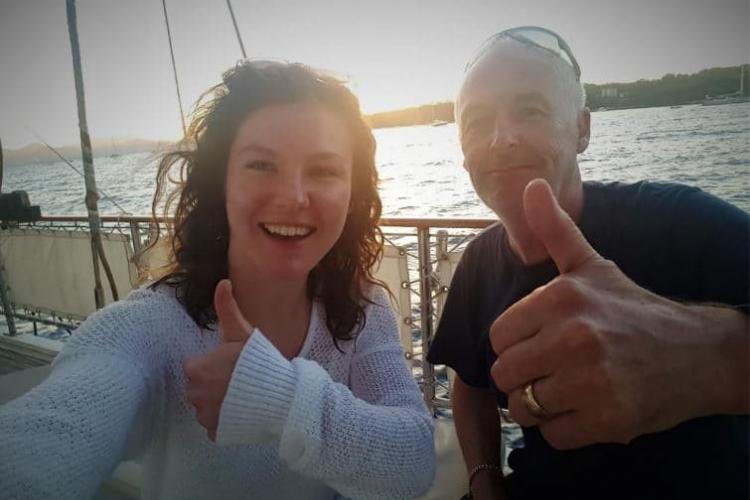 "It was a truly unforgettable week"

It was a truly unforgettable week – living on a boat in Italy and seeing Dolphins, whales and sea turtles everyday. I don’t speak a word of Italian but all the volunteers have been so kind, welcoming and willing and patient to teach. This was no touristy whale watching activity – we had lessons, helped with research and learned about the different species of dolphins and whales. So thank you, to everyone, for this incredible experience.

"We were very fortunate to have 23 different sightings"

Vicky Kornevall from the UK, founder of WorkingAbroad

It was a wonderful week – we were very fortunate to have 23 different sightings in 5 days of Fin Whale, Sperm Whale and Striped Dolphins.  The staff and crew were also really friendly and you were well looked after and they cooked some incredible food as well! Highly recommended project. 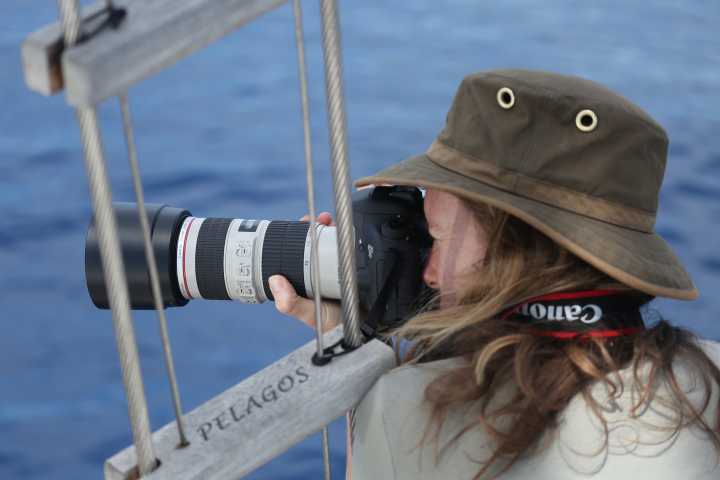 "I met some fabulous people and encountered wonderful wild dolphins"

Ann Watts from the UK

I had an amazing time; I met some fabulous people and encountered wonderful wild dolphins too! I really enjoyed the data capture and the statistical analysis. A trip I shall remember forever; thank you all.

"San Remo is a lovely place"

San Remo is a lovely place, the work on board was well organised and I felt very free. Food was excellent and I liked cooking all together. Congratulations to you in the office for managing everything before departure, and to the scientists on board!

"Thank you for a wonderful experience"

An extraordinary voyage with researchers who had a wonderful ability to wrangle 11 guests, while conducting serious and important detailed research into the habits and identities of cetaceans. They generously shared their detailed knowledge of whales and dolphins and other sea life with us. The participants were “simpatico”, the food was great and the whales cooperated by revealing themselves at regular intervals. Thank you for a wonderful experience.

"A journey that will help to sustain the Mediterranean Sea"

It wasn’t like a movie, there were no whales launching themselves onto the boat, no dolphins diving through hoops. It was much more real, respectful and impressive. So much to appreciate. The programme takes participants on a journey that will help to sustain the Mediterranean Sea, the whales, the dolphins, other marine life and the participants themselves. The team is not only professional, knowledgeable, and organised, but also a joy to be around. Thank you to Francesca, Viridiana, Nina and Paolo.

It was one of those weeks where the planets aligned – the weather was beautiful, the seas were mostly kind, the team of people on the boat were a great lot and the cetaceans showed themselves often enough to earn their appearance fees. Thank you indeed to the professionalism of the crew – Francesca, Viridiana, Nina and Captain Paolo – I have learnt a lot about these wonderful creatures who inhabit our oceans and remind us of both the antiquity and fragility of Planet Earth. Long may she live! Research and programs such as this will be what will save her. 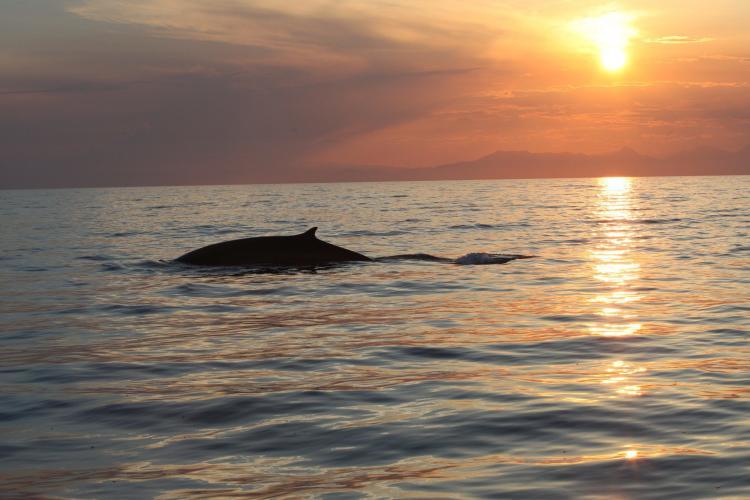 Khoa from the USA

As sad as it sounds, it took an experience like this for me to realise the beauty and magnificence of cetaceans and the enormous effect that humans have on their future well-being. I will remain ever vigilant and ever true regarding personal decisions I make from this moment on. Thank you for providing me with this once-in-a-lifetime opportunity – you’ve been extremely welcoming and patient, even if we have trouble reporting what types of boats are in the vicinity =). I won’t let you down!