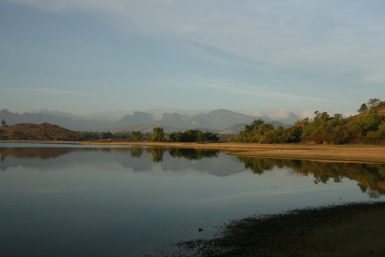 An island nation located in the Indian Ocean, Sri Lanka is the largest island off the coast of the Indian mainland. Divided largely between the ecological ‘wet’ zones of the south and southwest and ‘dry’ zones of the north and northeast, Sri Lanka boasts impressive biodiversity and some of the most beautiful wildlife watching opportunities in the world.

The climate is hot and tropical with high, average temperatures. The country’s seasons, like many others in the region are dictated largely by the monsoons: The northeast monsoon (December to March), and the southwest monsoon (June to October). Read more about Sri Lanka’s wildlife, biodiversity, climate, history and culture here. 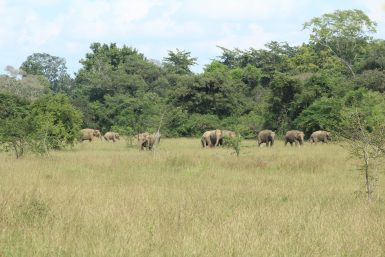 Wasgamuwa National Park is situated in the Matale and Polonnaruwa Districts in the centre of Sri Lanka. It exhibits some of the highest levels of biodiversity across the protected areas in the country. It is well known for its large herds of elephant as well as purple faced langur monkeys, wild boar, sambar and spotted deer, buffalo and rarely sighted leopards and sloth bears.

It was declared a national park to protect and to make a refuge for the displaced wild animals in the 1980s. Originally it was designated as a nature reserve in 1938, and in the early 1970s the area was changed to a strict nature reserve.

The National Park’s annual daily temperature is 28°C and has a dry zone climate. Most rain is received during the north-eastern monsoon, from around October to January, with July to September bringing the dry season.

The volunteer field house is situated on a hill by the south-eastern boundary of the Pussellayaya village in Wasgamuwa in the Central Province of Sri Lanka and overlooks an incredibly scenic and dynamic tapestry of rural and remote Sri Lanka. To the south along the far horizon stand the most significant and one of the most distinguishing geographic features of the Central Province, the Knuckles Mountain Range. Looming over the landscape the imposing and distinctly knuckle-shaped mountain ridge is unmistakable.