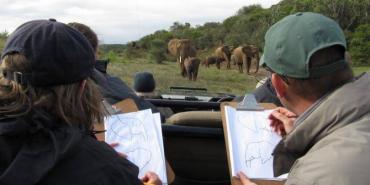 Kariega Game Reserve is situated in the Eastern Cape of South Africa, only two hours drive from Port Elizabeth. This area historically had an abundance of wild game roaming free with one of the richest wildlife areas on the African continent.  The Eastern Cape is famous for a number of other game reserves.

Cultural information
The area like many in South Africa is steeped in cultural diversity and history. The first inhabitants of the area were hunter gatherers, the Khoi Khoi and San people (commonly known as Bushmen or Strandlopers (beach walkers). The Khoi Khoi and San people mixed over time and eventually became the Khoisan. Unfortunately all that remains of the true Khoisan people in the area, is their rock art and remnants of there bloodline in the Afrikaans speaking Cape coloured people.

Kariega Game Reserve takes its name from the river forming its eastern boundary, the Kariega River, which is the Khoisan word for Steenbuck (a small antelope). The reserves western boundary is formed by the aptly named Bushmans river.

Life as a Volunteer at Kariega!

Watch this video showcasing the volunteer programme at the Kariega Game Reserve and listen to ex-volunteers speaking about their experiences working behind the scenes of an African game reserve.