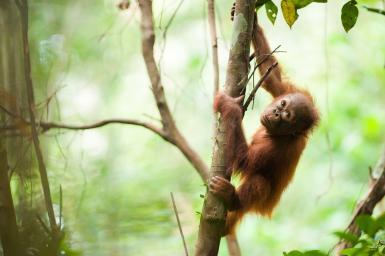 Indonesia is a collection of thousands of islands making it the largest archipelago in the world, located between the Indian and Pacific Ocean. It’s a nation of endless possibilities for adventure with its natural riches, cultural diversity, ancient history and incredible wildlife. Boasting with the second highest level of biodiversity in the world, Indonesia is one of the 17 mega-diverse countries and has two of the world’s 25 biodiversity hot-spots. With the world’s third largest area of rainforest after the Amazon and Congo Basin, their forests include species like the endangered orangutans and critically endangered Sumatran tigers and rhinos. All sadly threatened from habitat degradation and fragmentation, landscape changes, over-exploitation, pollution, climate change, alien species and wildlife trading.

The Rungan River Landscape is flat and open in places, but can be dense and flooded in others. Expect to find walking to be extremely hard work and falling over to be a rite of passage. On top of this the humidity and temperatures are very high. Typical daytime shade temperatures are 32ºC at base camp or in the towns and 27ºC in the jungle. In the late evenings, however, the temperature can drop by up to 7ºC in the forest, so it can feel quite cool compared to town.

You can read more about Indonesia and its history, culture, wildlife and alike on our country page here.