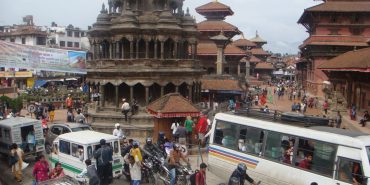 Nepal, bordered by India to the South and China to the North, is a country diverse in its climate, peoples and culture. It is where the cold peaks of the Himalayas, containing seven of the world’s ten highest mountains, including Mt. Everest, meet the steamy heat of the Indian plains, where some of the rarest flora and fauna in the world roam in the jungle regions around Chitwan. Nepal’s rich cultural, artistic and architectural heritage stems from the three historic kingdoms which developed in the Kathmandu valley, and the religious history of the region.

Gautama Buddha was born in Nepal. Nepal is also one of the poorest countries in the world, particularly in rural areas, where literacy and health are poor when compared with urban centres. However, the Nepalese are a friendly, compassionate people, and the traditional Nepali teaching ‘atithi devo vawa’ (guests are the form of god), is one which the Nepalese people subscribe to.

You can read more about Nepal under: