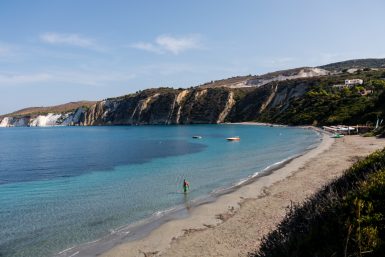 Kefalonia is found off the west coast of Greece and is the largest island of the Ionian Sea. It remains sparsely populated after a devastating earthquake in 1953. The island has a rich biodiversity, with a significant number of endemic and rare species.  Breathtaking beauty stretches from the white-sand beaches to the top of the towering mountains that rise from the sea.

Unlike the eastern islands of Greece, Kefalonia is green and lush. It boasts stunning scenery, beautiful villages, unique traditions and diverse local products.  You must try the Robola wine, wild thyme and fir-tree honey. Or, sample the local olive oil,  cheese, pasteli, mandoles and the famed Kefalonian meat pie. The island has historic sites that span over four millennia. These include ancient Mycenaean relics and recent WW2 landmarks.  There are many attractions to explore!

Kefalonia is one ferry ride away from the port city of Patra on the mainland. From Patra, it is easy to find transport to many incredible places and other nearby countries. For example, you can check out Ancona, Venice, Italy, Corfu and Igoumenitsa!  With one ferry, you can also explore the nearby islands of Ithaca, Lefkada and Zakynthos.

Watch a video below highlighting the turtle conservation activities at this project, including an interview with the project’s co-founder.

Watch a video below with some interviews from volunteers describing their experiences during the most recent field season.

Watch an amazing video below showing baby turtles hatching from the nest, crawling along the beach, and finally making it out to sea! 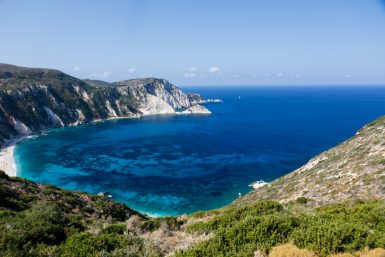 The area has a Mediterranean climate with warm to hot summers and cool winters. The summers are dry with much of the rainfall occurring in winter. The hottest months are July and August with an average high of 29°C.  Fortunately, the sea is a great place to cool off!  In winter, the average high is around 12°C with an average low of 5°C. 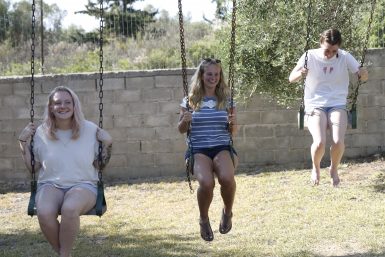 Argostoli is the capital town of Kefalonia, situated on the south-west coast of the island. The town’s harbour borders the bay of Argostoli. This is naturally protected from the open sea by the Argostoli and Paliki peninsulas. The shallower end of the bay blends into the Koutavos Lagoon. Here, the warm waters become home to a number of sea turtles during the summer season. There are also a few turtles who stay through winter.

The town of Lixouri is on the Paliki peninsula – the western region of Kefalonia.  Its south coast is lined with stretching beaches.  One of these beaches, Xi, is famous for its red-tinted sand and bustling groups of tourists during summer. The shallow waters between these beaches and the islet of Vardiani in the south are scattered with seaweed-covered rocky reefs.  They form an ideal nesting habitat for sea turtles.