The Seychelles has 115 granite and coral islands that lie between 480km and 1,600km from the east coast of Africa in the Indian Ocean. Of these 115 islands, 41 of the Inner Islands constitute the oldest mid-oceanic granite islands on earth, while a further 74 form the five groups of low-lying coral atolls and reef islets that are the Outer Islands. Approximately 90,000 people live in the Seychelles, which has three official languages: Creole, English and French.

The weather usually never reaches the extremes of heat or cold. The temperature rarely drops below 24°C or rises above 32°C.  A larger amount of the annual rainfall falls during the months of December to February compared to other months. The weather is hottest from December to April, where the humidity is also high. The months of May to October bring drier, cooler weather, and livelier seas.

Seychelles is one of the world’s few frontiers that offers its visitors breathtaking natural beauty in pristine surroundings still untouched by people. Seychelles is a living museum of natural history and a sanctuary for some of the rarest species of flora and fauna on earth. Seychelles is home to two UNESCO World Heritage Sites – Aldabra, the world’s largest raised coral atoll and Praslin’s Vallée de Mai, once believed to be the original site of the Garden of Eden. 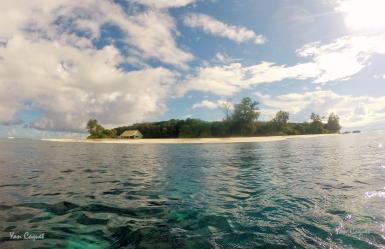 Our Island Conservation Programme takes place on Cousin Island, which has been a protected area for almost 50 years and is considered one of the world’s great conservation success stories. This small 27ha island has been designated as a Special Reserve and includes a marine reserve 400m radius around the island. It is a wildlife jewel. It has five endemic land birds including the Seychelles warbler and the Seychelles Magpie-robin and more than 300,000 seabirds from seven species nest here. It is home to giant land tortoises and possibly has the highest density of skink in the world. Cousin Island is also the most important nesting site for Hawksbill turtles in the Western Indian Ocean and is host to the world’s longest running monitoring program for this species.

In 2002, it was the first reserve in Africa to be chosen to become part of the International Biodiversity Observation Year (IBOY). In 2003, it was the only site in Seychelles to be chosen by the United Nations Environment Program (UNEP) in its Management Effectiveness study project of Marine Protected Areas. Cousin is a demonstration site of the International Coral Reef Action Network (ICRAN). In 2004, it won the prestigious Conde Nast Traveler Ecotourism Award. Cousin has been the subject of several articles and case studies focusing on eco-tourism. In 2010 Cousin Island became the World’s First Carbon Neutral Nature Reserve.

You can find more info on the Seychelles, history and cultural sights on our country page here.