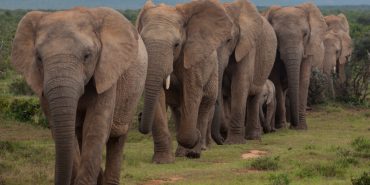 Shamwari Private Game Reserve is situated in the Eastern Cape of South Africa, only an hour’s drive from Port Elizabeth. This area historically had an abundance of wild game roaming free with one of the richest wildlife areas on the African continent.  The Eastern Cape is famous for a number of other game reserves. The great herds of Knysna Forest elephants were almost totally eradicated at the turn of this century and in 1931 there were only 11 elephants remaining.  Miraculously, the man most responsible for nearly wiping out an entire species had a dramatic change of heart and spent the remainder of life fighting for a safe haven to conserve these rare and wonderful animals.  Addo National Park and the Mountain Zebra Park saw almost exactly the same thing happen to the rare mountain zebra. Shot to the brink of extinction, in the 1930s this rare species struggled to come back. Today, there are over 200 in the park. On 15th October 1992, Shamwari was officially opened, and an Animal Rescue and Educational program was launched, in partnership with the Born Free Foundation to home rescued big cats from captivity.  Over time Shamwari grew and established itself and by the year 2000, the Reserve was large enough and stocked sufficiently to support large predators. A dedicated and systematic re-introduction program was launched and finally in October 2000, the first lions were brought back to the Eastern Cape and released at Shamwari to fulfil a dream.

Today over 5000 game range freely, having been bred and/or re-introduced into Shamwari, now a Game Reserve stretching over 23000 ha.

Life as a Volunteer at Shamwari!

Watch this clip to understand how Shamwari has evolved from being a barren lifeless farmland 20 years ago to the present day with 25,000 hectares of pristine wilderness.  Hear from other volunteers about what life is like as a volunteer at Shamwari!