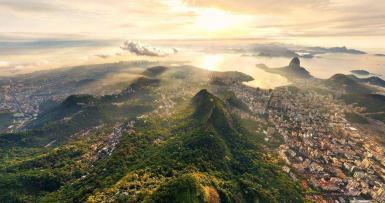 Bustling metropolises, nestled among forested hills, sit alongside stretching coastline; creating a stark contrast between nature and city. But this is characteristic of Brazil, where an effervescent culture sets itself up amidst immense natural wonders. Between the two, this large South American country is bursting at the seams with the spectacular. Colonial architecture tangles with the sheer diversity of the people that mingle along the streets, making the food, music and dance a unique blend of influences from around the globe.

Rio de Janeiro, the self proclaimed cultural capital of Brazil, is the second most populous city in the country with its 6.5 million people. This UNESCO heritage city is among the most visited in South America and is famous for its beaches, natural wonders, sights like Christ the Redeemer, and not to forget the largest party of the year, Carnival!

Given the vast array of terrain and geography, the country’s climate depends largely on the areas elevation and proximity to the ocean. However, by and large, Brazil can be said to have a tropical/subtropical climate. The year is divided into wet and dry seasons, rather than four distinct periods, and overall the country is hot, humid and wet. In Rio de Janeiro, the rainy season falls between January and April with the latter as the wettest month. And, while temperatures are hot all year-round, they peak in these months, sitting around maximums of 40℃ with minimums in the low-20℃s. The coldest months, between June and August, still see temperatures of 25℃ at midday and late teens at nighttime.

You can learn more about Brazil and its history, culture, wildlife and more on our country page here.