Volunteer at the Jane Goodall Chimpanzee Sanctuary in South Africa

South Africa is an incredibly beautiful country, and it’s not only South Africans who think so.  Various rankings consistently place it in the top 20 most beautiful places in the world and Cape Town, its legislative capital, has been named ‘the best city in the world’ by the Telegraph UK.  It’s not hard to see why as the country has a bit of the best of everything; diverse and vibrant cities bustling with energy, blissful white sand beaches and wide savannas teeming with wildlife (locally known as ‘the bush’).  At the southern tip of the African continent and bordered by Namibia, Botswana, Zimbabwe, Mozambique, Swaziland and both the Indian and Atlantic Oceans, there is much to experience.

Information about Chimpanzees and the Jane Goodall Sanctuary 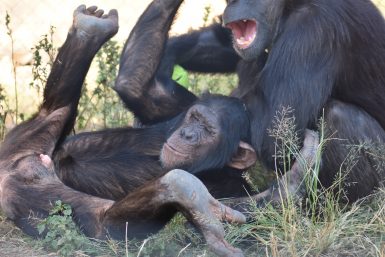 The chimpanzee (Pan Troglodytes) is considered to be the closest relative to humans and is “Endangered’ under a strict application of the IUCN Red List Criteria (International Union for Conservation of Nature) and is listed in Appendix 1 of CITES (Convention on International Trade in Endangered Species of Wild Fauna and Flora).  Chimpanzees in the wild may be extinct within the next 10 – 20 years if current trends cannot be reversed.

The goal of the chimpanzee sanctuary is to rescue chimpanzees that have survived the bush meat trade, been orphaned, traded in the illegal pet market, or rescued from being traumatised for entertainment in circuses, beach resorts and night clubs.

The chimpanzees at the sanctuary are the lucky ones, living out their lives in a risk free environment and being provided with the necessary attention to recover from the trauma they have experienced.  The chimpanzees spend their days in semi-wild enclosures, and show normal social interaction and behavioural patterns as group members.

Founded in 1977, the Jane Goodall Institute continues Dr Goodall’s pioneering research on chimpanzee behaviour.  This research transformed scientific perceptions of the relationship between humans and animals.  The South African chimpanzee sanctuary is proud to be part of the Jane Goodall Institute, which is a global leader in the effort to conserve and preserve endangered species and habitats, and in particular chimpanzees.