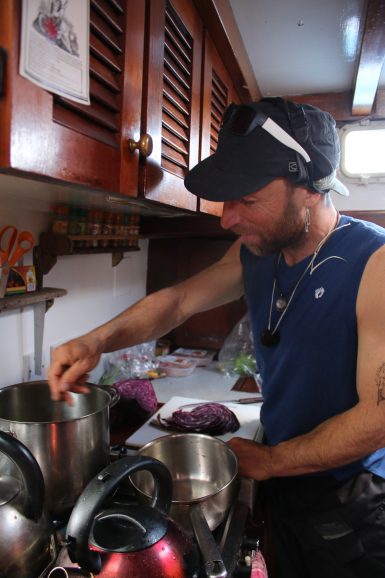 You will spend the duration of the project living aboard Silurian, a fully-equipped research yacht.  Silurian has surveyed thousands of nautical miles of Hebridean waters since being purchased in 2002; spending the field season monitoring as far north as Cape Wrath, as far south as Kintyre and as west as the St. Kilda archipelago.  Prior to joining the team, Silurian was used as a filming platform in the BBC series The Blue Planet.

Silurian can accommodate up to six volunteers and has a crew of three: Skipper, First Mate and Science Officer.  Silurian is a hard-working research vessel, not a luxury cruiser, although participants find her a safe and comfortable living environment. There are three volunteer cabins in the forward section of the vessel. Each of these contains two berths and a small amount of storage space for personal belongings. Two of the cabins have bunk style beds and the other cabin has a twin double berth.  Participants have access to their own toilet and shower room. Internet access during the project is variable, but more often than not inaccessible.  There is a large saloon space in the heart of the boat where most time will be spent in the evening eating and socialising. The galley is very well equipped for a yacht, with fridge and freezer space.

Both volunteers and research assistants will be responsible for cooking on a rotation basis, though meal plans are typically set out by the crew.  Enough food to last the duration of the expedition will be loaded aboard Silurian prior to the rendezvous.  Local island meat, bread and rolls are sourced.  Fruit and vegetables are sourced from local companies too.  A whole variety of different diets can be catered for aboard, simply let the researchers know if you have any requirements.  Water is limited and volunteers are encouraged to conserve as much as possible during the expedition.  The dishwashing and general cleaning of the house are further shared duties.

As the duration of the project will be spent aboard a research yacht, there will be no need for transport during the expedition.  In the evenings, volunteers may have the opportunity to venture ashore to explore the many Hebridean islands, however many of these are uninhabited, let alone have roads!

There are three rendezvous locations for this project: Tobermory (on the Isle of Mull), Kyle of Lochalsh (on the mainland where you’ll find the bridge to the Isle of Skye) and Ullapool (the most north-western town on the Scottish Mainland).  All are accessible via public transport links.

If flying, it is advised that you fly into Glasgow for Tobermory rendezvous and Inverness for Kyle of Lochalsh and Ullpool rendezvous.  However, you will be able to access all locations by flying into both Glasgow and Edinburgh, with public transport links to all.

Climate in the Hebrides 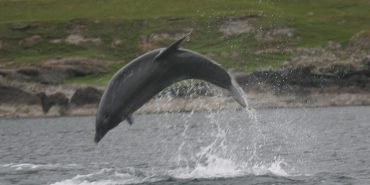 The west coast of Scotland, while outstandingly beautiful, is not known for its tropical climate and rain is prevalent throughout the year. Even on bright, sunny days the added wind chill of being at sea can affect the temperature dramatically, so please bear that in mind when packing your equipment. Sea-faring waterproofs are provided, designed for use offshore, they are effective at keeping the west coast weather at bay. The sea is a highly reflective environment and you are therefore advised to bring sunscreen and sunglasses for protection from the glare, even when it’s cold enough for a woolly hat! Midges are prevalent in west Scotland during the summer months and, although they are likely only to be encountered during evening shore leave, they can be very irritating. It is advisable to bring insect repellent for trips ashore.

No experience is required as full training will be provided on board.  Volunteers should be aged 18+ (16+ if doing a teen team survey), and comfortable living aboard a yacht and maintaining survey effort in all weather conditions. Good eyesight and hearing is important to undertake the data collection during the survey.  The Hebridean islands are the remotest parts of the UK and so access to medical services is limited, if you suffer from a serious condition you may want to consider a project closer to civilisation.