Indonesia is a collection of thousands of islands making it the largest archipelago in the world, located between the Indian and Pacific Ocean. It’s a nation of endless possibilities for adventure with its natural riches, cultural diversity, ancient history and incredible wildlife. Boasting with the second highest level of biodiversity in the world, Indonesia is one of the 17 mega-diverse countries and has two of the world’s 25 biodiversity hot-spots. With the world’s third largest area of rainforest after the Amazon and Congo Basin, their forests include species like the endangered orangutans and critically endangered Sumatran tigers and rhinos. All sadly threatened from habitat degradation and fragmentation, landscape changes, over-exploitation, pollution, climate change, alien species and wildlife trading. 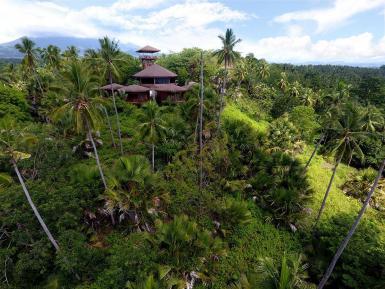 Sulawesi is one of the four Greater Sunda Islands situated east of Borneo, west of the Maluku Islands, and south of Mindanao and the Sulu Archipelago. It is the world’s eleventh-largest island and is surrounded by deep seas that rise in the interior to mostly non-volcanic mountains. Though the northern peninsula does contain several active volcanoes such as Mount Lokon, Mount Awu, Soputan and Karangetang.

The Rescue Centre is set in a beautiful location in a former coconut palm plantation on a hill near the sea, overlooking the Lembeh Straights and near the town of Bitung in North Sulawesi. It is just a few hundred miles north of the equator and has a typical equatorial climate with two seasons: rainy and dry, although this is less noticeable on the coast where the rescue centre is situated.

North Sulawesi has its own micro-climate and the differences between the seasons are not as great as those described in many of the travel guides to Indonesia. The dry season lasts from April to October with just the occasional shower and the wet season begins in November when cool north-westerly winds arrive from the South China Sea.  Rain falls mainly in brief but heavy showers throughout the wet season. Temperature averages between 23-35°C in the dry season and 23-30°C in the wet season.

If you are unused to a tropical climate you will find work very hot and sticky for the first few days until your body adapts to the climate. But there are always cooling breezes and a dip in the sea to look forward to after work, though please remember the beach is shared by the local villagers and always observe the dress code for swimming and relaxing on the beach.

You can read more about Indonesia and its history, culture, wildlife and alike on our country page here.