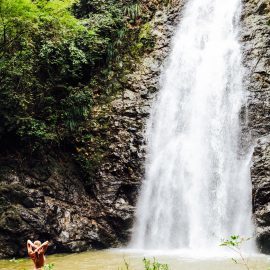 Volunteers can spend time at the beautiful Montezuma Waterfalls (right), or visiting tidal pools or beaches throughout the Nicoya Province.  A lot of people come to this part of Costa Rica for surfing and for its beauty and also to visit the Cabo Blanco Nature Reserve.  Cabo Blanco Nature Reserve is the pioneer of wildlife and environmental conservation in Costa Rica, which became the first protected area in Costa Rica in 1963. Situated on the extreme southern tip of the Nicoya peninsula it protects 1788 hectares of ocean and 1270 hectares of tropical forest, 15% of which is primary forest where rare tree, bird and other endangered animal species can find refuge.

Up until now, 150 species of trees and around 240 species of birds have been recorded in Cabo Blanco, making it an important wildlife sanctuary.  Among Cabo Blanco’s endangered animals are the Jaguar, Puma, Ocelot, Jaguarundi, Margay cat, Spotted Owl, Caracara, and Giant Egret.

As of 2017, 352 species are listed on the endangered species list in Costa Rica. In just two years it has jumped from 330.  Allowing this rate of increase would be tragic and further destroy the special biodiversity found here. This programme aims to boost populations of endangered species in order to try and reverse the trend of mounting population loss. 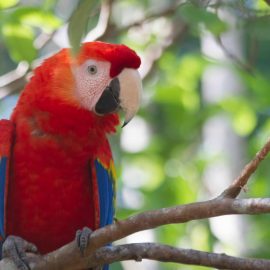 The Rescue centre has an alliance with AsoProLapa, a Scarlet Macaw breeding programme on the Nicoya Peninsula. Thanks to the proximity to the Cabo Blanco reserve, the Centre is an ideal spot for a Macaw reintroduction project and returning them to an area where they no longer exist.

Macaws have lived here in the past and two of their main food sources, the Mountain Almond and Beach Almond trees grow in abundance.  There is also no known predator here at the park, making it a perfect area for release and population growth.

The centre has now raised the funds to build the Macaw enclosures and the macaws were received recently. They will soon start to release these magnificent birds back to where they belong.

The centre is also considering reintroducing the 3-toed sloth.  By many accounts, they once lived here on the southern tip of the Nicoya Peninsula. There have been sightings of 3-toed sloths as recently as 2007 in the neighbouring town of Delicias.   There are several possibilities with the hopes of reintroduction to the area, which would strengthen and diversify populations to buck the current trends of animal loss and extinction.  Volunteers can all be part of this work.

Have a look at Maya Sekkiou’s volunteer experience at the rescue centre, from her lovely video shared with us below.