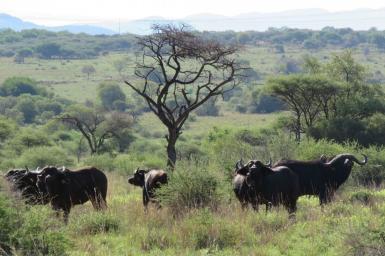 The Wildlife Reserve covers an area of 4,760Ha (11,763 acres) and is situated in the malaria-free North-West Province of South Africa. The reserve lies on the boundary of the highveld and bushveld regions which gives rise to a grass-dominated habitat with long strips of bushveld and acacia woodland. The dominant rock types, gabbro and granite, create a relatively flat but slightly undulating landscape which is dissected by a series of seasonal streams. The climate is mild sub-arid with an average daily mean temperature of 28ºC in December and 15ºC in July.  The mean annual rainfall is approximately 575mm which generally falls between October and March.

The reserve also boasts over 300 bird species mixing those which frequent the dry Kalahari type habitat and those that live in the wetter highveld region. The construction of dams has also led to an abundance of wetland bird species and other aquatic life. Nine plant communities have been identified which include over 85 grass, woody and herbaceous species.

Click below to watch a unique camera trap night-time sighting of one of the reserves brown hyenas: