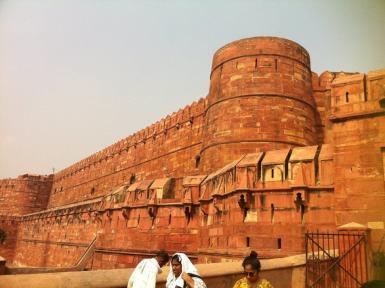 There is little about India that isn’t dazzling. It is a country that, by all accounts, maintains an incredible display of light and colour. In fact, two of the most well-known festivals, Diwali and Holi, celebrate this fact – in spectacular fashion. Amidst this light and colour, you’ll find a diverse collection of people, sometimes clustered together in the teeming cities and sometimes spread apart across more barren terrain. All in all, there are some truly breathtaking landscapes to behold. Time in India is, in all ways, a constant adventure. There is historic architecture to admire, tantalising food to taste, age-old spiritualities to embrace and an array of wildlife to cherish. Any time spent here will certainly be remembered forever.

Information about Elephants in India: 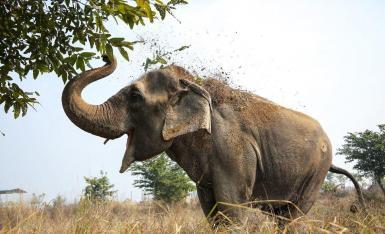 The survival of the Asian Elephant in India is critical to the survival of the entire species in South East Asia. Home to almost 60% of Earth’s remaining elephant population, India is plagued with a lack of awareness and education which is leading to the persistent enslavement of these amazing animals for manual labour, performances, processions, entertainment and street begging. Smaller than their African counterparts, Asian elephants are easily recognisable by their “small” rounded ears. Herbivorous in nature, their diet consists of green grass, roots, fruits, and fodder. An adult elephant can consume up to 300-500 pounds (136-250 kilograms) of food in a single day. The life span of an Asian elephant is approximately 60 to 70 years.

Information about Moon Bears in India:

The Himalayan Black Bear (Ursus thibetanus), is an endangered subspecies of the Asiatic Black Bear. It is a medium-sized, sharp-clawed, black-coloured bear with a light brown muzzle and a pale yellow crescent on the chest. This species of bear has a wide distribution range spanning across the Himalayas from Bhutan to Pakistan. Over the years the Himalayan Black Bear has increasingly fallen victim to the human-wildlife conflict situation in Kashmir due to large-scale deforestation.

Information about Sloth Bears in India: 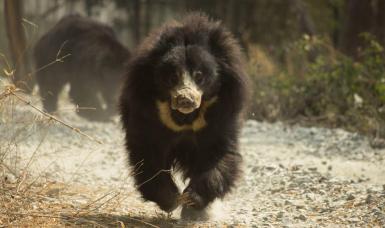 The Indian Sloth Bear (Melursus Ursinus) can easily be recognized by his shaggy black coat, long muzzle, protruding lip and by a white V-shaped patch on the chest. His diet consists of fruits, berries, grasses, flowers, honey, insect larvae and other insects. He has a particular proclivity to “vacuum” up termites and ants using his long snout. For over 400 years, the Sloth Bear had been a target for human exploitation. A nomadic tribe known as the Kalandars began ‘dancing’ sloth bears for the emperors during the Mughal era. Over centuries, as the kingdoms in India disappeared, the ‘dancing’ bear trade transitioned to become entertainment for villagers and tourists who paid to watch the bears jump in agony. Even with today’s reduced demand for the unethical practice of ‘dancing’ bears, Sloth Bear cubs are still being poached for use in Chinese medicines and gourmet cuisine in South-East Asia. This ongoing poaching, combined with habitat encroachment, continues to pose a serious threat to an already depleted population in the Indian Sub-Continent.