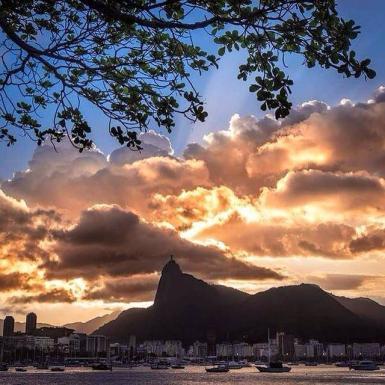 Brazil is the fifth largest country in the world both by population and area and it takes up a considerable portion of the South American continent.  It has a coastline that stretches over 7000 km and lays claim to a number of islands including Fernando de Noronha, Rocas Atoll, Saint Peter and Paul Rocks and Trindade and Martim Vaz Islands.  Its sheer size means it shares borders with all other South American countries bar two, Chile and Ecuador, and it means the country plays host to a diverse spread of landscapes. This includes the world-renowned Amazon rainforest, stretching highlands, mangroves, dunes, coral reefs and the towering Great Escarpment along the coast which gives the impression from the water of an impenetrable wall.  The country is particularly abundant in rivers, one of which, the Amazon river, carries more water to the Atlantic Ocean than any other in the world.  The river is a spectacular 48 km at its widest points during the wet season and a not so little 1 km wide at its narrowest.   The Amazon Basin itself, in the north and the west, occupies about two-thirds of the country’s area.  The Brazilian highlands in the southeast hold the highest point, Pico de Neblina, at 3014 meters.  These uplands drop off quite quickly at the coast leaving the impression of the wall.

Given the vast array of terrain and geography, the country’s climate depends largely on the elevation and proximity of the area to the ocean.  However, by and large, Brazil can be said to have a tropical/subtropical climate.  The year is divided into wet and dry seasons, rather than four distinct periods, and overall the country is hot, humid and wet.  Though some areas experience dry spells that can stretch to the occasional drought.  The projects offered all take place in Rio de Janeiro, on the southern coast; the self-proclaimed cultural capital.  The rainy season falls between January and April with April as the wettest month.  And, while temperatures are hot all year-round, they peak in these months, sitting around maximums of 30℃ with minimums in the low-20℃s.  During hot summers though, maximums can sometimes reach as high as 40℃ or 50℃!  The coldest months, between June and August, still see temperatures of 25℃ at midday and late teens at nighttime.